Some Shiite scholars believe that the Saudi king's death will signal the resurrection of the Mahdi and the beginning of the end-times. 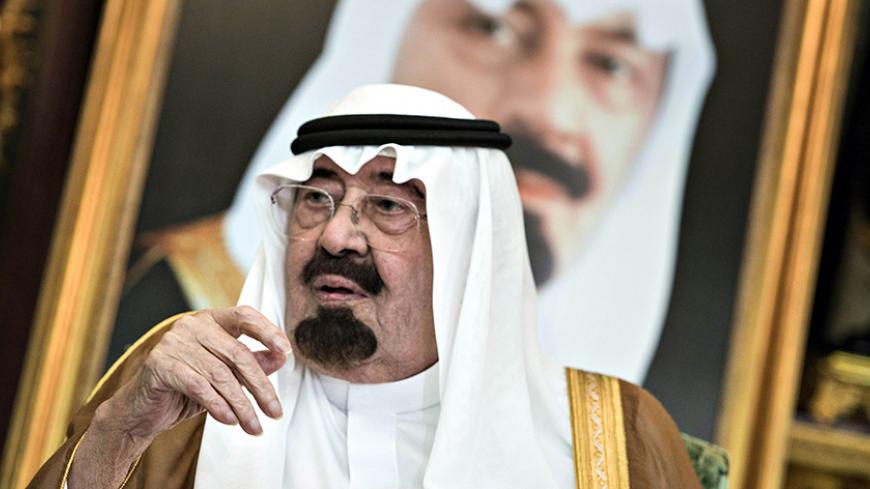 Saudi King Abdullah bin Abdulaziz sits before a meeting with US Secretary of State John Kerry at the Royal Palace in Jeddah, Sept. 11, 2014. - REUTERS/Brendan Smialowski

In the last two years, media outlets have published conflicting reports on Saudi King Abdullah's health. Just last week, Saudi Arabia's Royal Court announced that the king has pneumonia and is temporarily using a breathing tube. In fact, every time the king's health deteriorates, news agencies speculate on what will become of the Saudi dynasty and its leadership after the king's death. But some Shiite scholars think differently about the matter, believing that Abdullah's death will mark the beginning of a chain of great events that will shock the world.

Abdullah, the 10th son of King Abdulaziz, was born Aug. 1, 1924. His mother, Fahda bint Asi Al Shuraim, was a member of the Al Rashid family, longtime rivals of the Al Saud family and a historic dynasty in the Arabian Peninsula that ruled the emirate of Jabal Shammar. Abdullah ascended to the throne in 2005 following the death of his half-brother King Fahd, though power was already in his hands.

According to Shiite hadiths, after the death of a king named Abdullah in the Hijaz — a western region of present-day Saudi Arabia — no successor to the throne would be accepted, and disagreements would escalate and persist until the rise of Imam Mahdi.

The Shiites believe that divine Imams are heirs to the political and religious Ummah, or Islamic nation. These 12 imams are successors to the Prophet Muhammad and to the head of the caliphate, with Mahdi being the final Imam who disappeared, or went into occultation. Mahdi will be revealed only in the end-times, along with Jesus, to deliver peace to the world.

According to the book "250 Signs Until the Appearance of Imam Mahdi," Prophet Muhammad said: “On doomsday, a man who is carrying the name of an animal ascends to the throne, after which a man named Abdullah comes to the power. Whoever informs me of his death, I will inform him of the rise [of Mahdi]. After Abdullah passes away, for several days and months, the government will appear.”

A seminary teacher based in Qom told Al-Monitor on condition of anonymity, "The animal-named man can be King Fahd because one meaning of Fahd’s [name] is rapacious animal and cheetah, which matches what Prophet Muhammad said."

The Bahar al-Anvar, a book of hadiths, quotes the sixth Shiite Imam Sadegh as saying: "When Abdullah dies, people will agree on no one, and this issue will be kept alive till the rise of Imam [Mahdi]. An age of a hundred-year reign comes to an end, and an age of a [kingdom lasting] a few days and months arrives."

The Shiite scholar in Qom said, "Currently, there is a possibility of a power struggle in Saudi Arabia, as King Abdullah has tried to make up the new post of deputy crown prince. Actually, with regard to [this], if Prince Salman becomes the king and Muqrin bin Abdulaziz is named the crown prince, the next deputy crown prince will be Mutaib bin Abdullah, so we can expect tensions between King Abdullah's sons and Salman's brothers to escalate after Abdullah passes away."

According to Al-Akhbar newspaper, past tradition dictated that the interior minister would be the most likely candidate for second deputy prime minister, and after that, the post of crown prince. But after upgrading the status of the National Guard, which is chaired by Mutaib bin Abdullah, and turning it into a ministry on par with the ministries of defense and interior, King Abdullah’s wing in the royal family is well-positioned to be a strong contender for the throne.

The Qom seminary teacher said that according to some hadiths, leaders in the Hijaz will hide news of the king's death for 40 days. Based on Abdullah's deteriorating health situation, this could have happened by now.

Some believe that the rise of terrorist groups in the Levant, along with their black flags, is another sign of Mahdi's resurrection.

According to the books "Comments on the Peak of Eloquence" and "Nahj al-sa'adah fi mustadrak Nahj al-balagha," the first Shiite Imam Ali said, “When you witness black flags, don’t move, because their calls are void and null and you shouldn’t help them. Their heart is like iron fillings, and they don’t honor their promise. Their names and monikers are taken from the names of cities.”

The Qom-based scholar explained the quotation, “Black flags can suggest the Islamic State, which is killing hundreds of innocent people in the region with brutality, and [regarding people named after cities], I can mention Abu Bakr al-Baghdadi or Omar al-Chechen.”

He added, “Many in the seminary of Qom believe that the rise of Imam Mahdi is imminent. Even important figures in the seminary have expressed their hope for this event to happen and has called for our readiness to help him.”

“What’s happening in the region is very similar to what our Imams have predicted about preconditions for the rise of Imam Mahdi, so the moment of truth may have come.”

Historian Muhammad Hossein Rajabi Davani told an Iranian newspaper: “With respect to promises in Shiite hadiths, we are certainly experiencing doomsday, but doomsday has no time frame and it’s not known when it begins and ends.”

Yet, certain Shiite narratives and hadiths contradict the aforementioned narratives, suggesting different signs for the rise of Imam Mahdi. Today, however, many are speculating about the events that will follow the Saudi king's death, as well as its impact on global developments. With the death of King Abdullah, according to some analyses, stability in Riyadh may come to an end, setting off a chain of prophecies and the resurrection of Mahdi.

Editor's note: This piece has been updated since its initial publication.