Israeli parents accuse their 30- and 40-year-old children of being spoiled and uncommitted to work hard as they did, while children blame them for handing over a country in a dire economic and security situation. 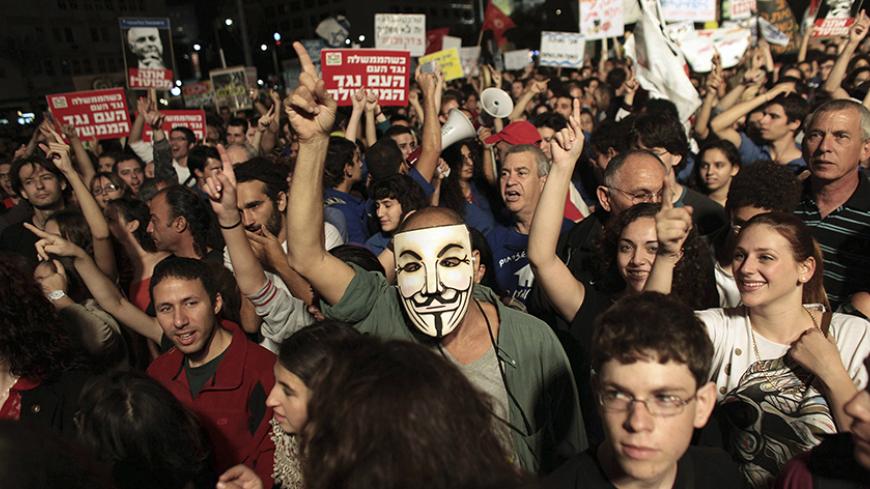 Protesters take part in a rally calling for social justice and a lower cost of living in Rabin square in Tel Aviv, Oct. 29, 2011. - REUTERS/Daniel Bar On

The new book by sociologist Oz Almog and educator Tamar Almog, titled "Generation Y: Like there’s no tomorrow," and a series of viral articles by journalist Tzlil Avraham that disputes the book’s conclusions — the first of which is titled “Why Tamar and Oz Almog got everything wrong about millennials" — present two opposing views of the millennials (called Generation Y in Israel), the generation born in the 1980s and 1990s, and their parents.

Avraham and Oz and Tamar Almog actually agree on many points. The main disagreement between them is that the book's authors wish to focus on describing the millennials as reflected in the study they conducted, while Avraham believes that the focus should be on the factors that led to her generation’s behavior, as depicted in the book.

According to the book, the millennials are alienated, egocentric, spoiled, late to mature, dependent on their parents, even exploiting them financially, and shirk responsibility. In an interview with Al-Monitor, Oz Almog emphasized that the book also points to positive characteristics. “It’s a feminist, practical generation, with an attitude of ‘cut the bullshit.’ They are more accepting and open,” he said. “This generation gives negligible weight to ethnic divides and openly accepts the LGBT community. They are exceptionally social and really know how to have a good time.”

Avraham said that she decided to respond to the book, because "if we don't talk about the topic, our parents will, and they will say we are lazy and spoiled." She added that following her series of articles, readers wrote to her things like, “Finally someone wrote what I feel” or “This article is about me.”

She said, “It’s not true that we are not mature enough. We have to understand that the reality of materialism has caused this. One of the claims [made against us] is that we do not leave home and do not grow up. But a 30-year-old who works shifts can’t do that.”

According to Avraham, the millennials were leaders of the social protest movement against the high cost of living in the summer of 2011, when they protested against the economic conditions they have inherited from their parents. “Your generation [Almog] wrote an entire book that vilifies our generation … who received from you a country plagued by wars and terrorism, with a decimated and exploitative labor market, empty pension coffers, inhumane housing prices and a plundered future,” Avraham wrote in the first article of the series.

"We didn't write an indictment," Almog said, "but we didn't ignore generational weaknesses, like self-centeredness and difficulties in emotional resilience. We described reality. In dozens of meetings we conducted with groups of experts in all sorts of fields — and I’m talking about hundreds of experts — they told us, ‘You’re describing our children, our students, our soldiers, our clients, our workers.’ It is no coincidence that the book was at the top of the best-seller list from the moment it was published [in February]. People write with excitement that we put in a scientific framework what they felt intuitively.”

Almog added, "We conducted a research study for the police, based on our conclusions about young people, to make changes to the organization. Companies and institutions in the fields of high-tech, law, medicine, education, communications and others came to us for advice, because they all feel like something big is happening here. The debate over the millennials is awakening and we are happy about it. Our research describes a complicated reality and is based on surveys, focus groups and interviews with thousands of millennials. The most common reaction we get from young people is, ‘You described us in detail.’”

One of these youngsters is Efrat Krasner, 25, from Givat Shmuel. She comes from the religious sector, which one would expect to conform less to the characteristics described in the book. “I felt that the book is about me,” she told Al-Monitor. “I really feel the egocentric culture. The inability to commit drives me crazy. I tried to understand why, and I understood that I am like that too.”

In her article, Avraham explains that many millennials are "scarred" by hundreds of Israeli family meals where "the family sits around and says what they think about what you chose to study, how much you earn and every other decision you make." Thus, she said, the millennials experience the book as an indictment of them. The judges are their parents, teachers and employers.

"My mother really loves to compare how it was for them and what we are doing," Neta Amit told Al-Monitor. Amit, 29, who lives in Tel Aviv but was born in Haifa, added, “My parents say we are not willing to work hard like they did.”

Krasner, too, said, "My parents do not understand when I say I want to build myself. As far as they are concerned you have to get a degree, get married and that’s that. My father has worked at the same place his whole life, and they do not understand how someone can live like me.”

Young people point to the relatively high cost of living and the extensive housing crisis in light of their salaries as unique hardships they are facing. “The lack of a future leads to despair,” Amit said. “In our parents’ generation, if you worked hard — and they really did work hard — you got a car and owned a home. Today it is not like that.” Indeed, in 1988, an Israeli working person needed, on average, 79 salaries to buy an apartment, while in 2014, according to the Bank of Israel, 148 salaries were needed.

The unstable security situation does not make things easier, in their view. “There are wars all the time; there is no one to lead change, so why should important issues interest me? I’ll focus on myself,” Krasner said.

For his part, Almog said, "Even military service has changed a lot and does not cancel out the delayed maturity." Avraham believes that military service is in fact part of the problem and "delays financial solvency by three years [the period of obligatory military service for Israeli men].”

Another characteristic of the millennials, according to Almog, defines all Israelis: A lack of an instinct for revolution. Thus, while parents buy the book en masse and see it as confirming their views of their children — and the millennials see Avraham’s articles as testimony that everyone is like them and they are OK — it seems that the two sides will continue casting blame rather than change the situation.