Turkey on the hunt for skull of great Ottoman architect 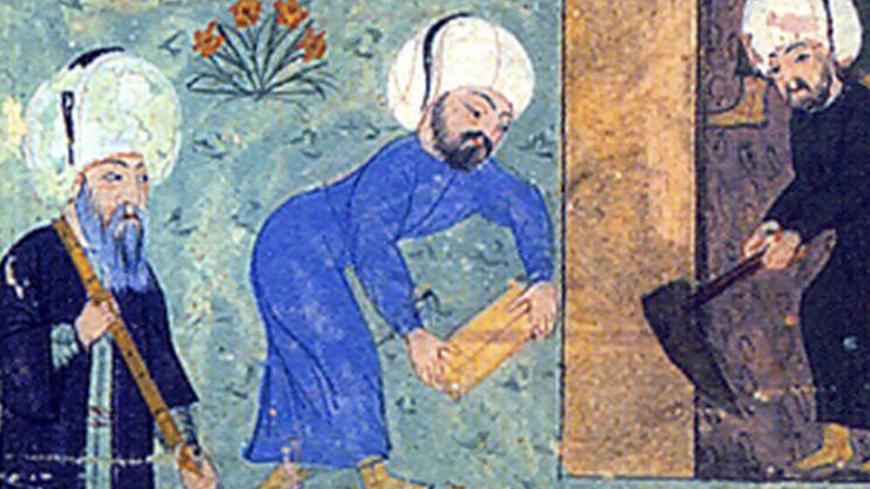 A miniature painting by Nakkaş Osman (1579) depicts a man with a staff (L), thought to be famed architect Mimar Sinan, preparing the grave of Sultan Suleyman I the Magnificent. - Wikimedia Commons

Earlier this month, Turkish Prime Minister Ahmet Davutoglu brought up an intriguing issue about Mimar Sinan, the 16th-century chief architect of the Ottoman Empire, whose ethnic roots have long been the subject of debate. In an infamous episode in the 1930s, the great master’s skull was exhumed from his grave for measurements intended to prove he was Turkish. Davutoglu said the skull had gone missing and he had ordered an investigation to hunt it down.

During its 14-year rule, the Justice and Development Party (AKP) has often brought up similar cases of racist and fascist action from the early years of the modern Turkish republic. Though the party’s motives remain controversial, many saw the debates as an opportunity to face up to the dark pages of the nation’s recent history. The debates, however, have proved to be just fleeting rhetoric with no real consequences. In 2011, for instance, the AKP brought up the mass killings of Alevis in Dersim in the late 1930s, and then-Prime Minister Recep Tayyip Erdogan even issued an apology on behalf of the state. The move, however, yielded nothing tangible for the country’s Alevis, many of whom say discrimination against them has, in fact, increased under the AKP.

It is hard to say whether Davutoglu’s move will lead to something different in terms of historical reconciliation, but the issue is important to understanding Turkish history and its ramifications today.

The legacy of Mimar Sinan — “Sinan the Architect” in Turkish — includes more than 350 structures such as mosques, palaces, madrassas and caravansaries. These constitute some of the most celebrated Ottoman buildings, and the engineering techniques in some of Sinan's masterpieces remain a mystery to this day.

Turkish historian Ayse Hur described to Al-Monitor the political climate in which Sinan’s grave was opened in 1935, 350 years after his death in 1588. “Racism was on the rise across the world in the 1930s, and in Turkey such [racial] studies were also underway. The Turkish Anthropological Research Center — which was founded on Ataturk’s instructions — was conducting comparative studies on the remains of children of different ethnic backgrounds like the Turks, Armenians, Greeks and Jews,” she said.

According to Hur, the historian and sociologist Afet Inan, Ataturk’s adopted daughter, was also involved in the studies with a doctoral research project seeking to prove Turks were a perfect representative of the brachycephalic Alpine race, which she conducted under the guidance of Swiss anthropologist Eugene Pittard.

“This giant ‘racist’ research involved no less than 64,000 people — something unseen even in Nazi Germany — and was sponsored by the state. Members of the Turkish Historical Institute were curious about the racial profiles of famous historical figures, or rather they postulated these figures belonged to the Turkish race and then sought physical evidence to prove it. That is how Sinan’s tomb was opened on Aug. 1, 1935, centuries after his death,” she said.

According to Hur, the Turkish Historical Institute’s official statement at the time said the tomb was opened, examined and then closed. A report in Aksam newspaper on Aug. 5, 1935, said the researchers had concluded Sinan’s skull was “brachycephalic” or broad-headed. “Since all Turks are brachycephalic, it is once again demonstrated that the great architect was Turkish not only culturally but also racially,” it said.

The debate on Sinan’s ethnicity continues. Summing up the prevailing arguments, Hur said, “Sinan’s actual name was Sinan bin Abdulmennan. Abdulmennan was a name given to converts to Islam. In his memoir, Sinan speaks of being a 'devshirme,' which was a term describing Christians the [Ottoman] state selected for posts in the palace or in the army. However, Sinan gave no further information about his roots. Even this silence on his part supports the validity of arguments about his non-Muslim roots. One ancient decree contains a request to exempt relatives of Sinan — named Sarioglu Dugenci, Ulisa and Nisan — from exile to Cyprus. According to Armenian historian Kevork Pamukciyan, the relatives’ names make it obvious Sinan was an Armenian. He also said that one of Sinan’s brothers was named Mikayel. Some nationalist historians, meanwhile, say Sinan hailed from the Christian Turkic Karamanlide community. Both theories could be true as no pure ethnic group could be found in history. Yet no information is available to back up the Karamanlide theory.”

What happened to Sinan’s skull after the examination? Davutoglu says it has disappeared and pledged efforts to recover it.

Hur, however, pointed to a different theory on what might have actually happened. “In the early 1940s, the team restoring Sinan’s tomb was alarmed when they realized the skull was not there. Whether any investigation was conducted on the issue at the time is unknown,” she said. “But in an interview in 1963, Sedat Cetintas, the renowned restoration architect who was part of the team that [first] opened the tomb, gave the following account: ‘I got Sinan’s tomb opened and managed to tuck in my head and a single shoulder. The corpse was completely decomposed and the head sample lay over the soil in the form of dust. … I found two 10-centimeter pieces of bone from each of Sinan’s upper arms and a piece with a diameter of 3-4 centimeters from his skull, and gave them to the research team.’ So if Cetintas’ account is true, there might have been no skull to examine in the first place, and even if there were, how suitable it was for a study remains an open question.”

Davutoglu’s pledge to recover the skull and "remove this black stain in our history" has prompted a flurry of activity at anthropology faculties conserving skulls. Ankara University has already said they don’t have Sinan’s skull. Hur added, “If Cetintas tells the truth, the recovery of a skull is not possible.”

And what about the “black stain”? Noting she doubted Davutoglu’s intentions, Hur said, “If an intact skull did exist and was lost, this would go down in history as a disgrace for the mindset of the 1930s. But this would be nothing compared to the other shameful acts of that mindset. Most recently, for instance, a mass grave, believed to date back to the 1937-38 Dersim operation, was discovered. Work is underway to identify the victims. And when it comes to mass graves from the post-1980 period, I have lost count of them. It is hard to figure out why Davutoglu has decided to hunt down Sinan’s skull, while he takes no interest in hunting down the perpetrators of [human rights violations] under the AKP, a task for which he is responsible. Moreover, I don’t think Davutoglu would show respect to the theory of Sinan’s Armenian descent.”