How Turkish police could have prevented IS massacre in Ankara

Recent reports in the Turkish press have fueled claims that police were more than just negligent in their failure to act on intelligence reports before the Islamic State attacked Ankara on Oct. 10. 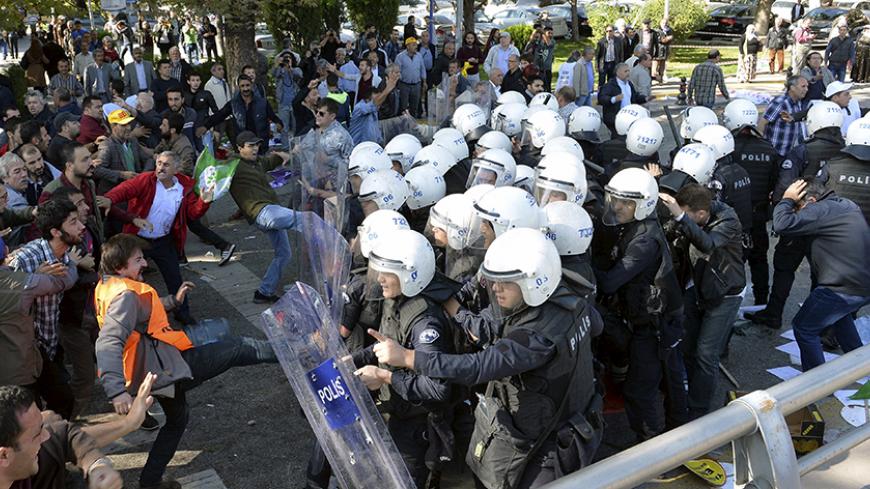 Could Turkish police have prevented the double-suicide attack Oct. 10 in Ankara that killed 102 people? Until April 13, we could only speculate. But now, we can give a firm answer that yes, the attack could have been thwarted.

This was the question asked immediately after the attack, because nobody had seen any police measures near the train station where the bombs went off. Those coming to the station, where a peace rally was being organized by labor unions and civil society organizations, were not searched by the police.

This question is vital because this Islamic State (IS) attack had a bearing on the fate of Turkey. Chaos and the threat of terror, which was forged by this bloodiest terror attack in Turkey’s history, played a role in the Justice and Development Party’s (AKP) victory in the Nov. 1 elections, after its resounding loss of votes in the June 7 general elections.

Thanks to stories in the daily newspaper Cumhuriyet by journalist Kemal Goktas published April 13 and April 14, we now know security forces had advance intelligence reports that IS was planning such attacks. The forces even had the names of the terrorists planning to carry them out. But not only did the police in Ankara fail to prevent the attacks, they actually facilitated the attacks with their ill-contrived actions.

The April 13 report in Cumhuriyet said:

In light of this information, one must conclude that IS’ Ankara massacre could have been foiled.

The Ankara attack was the zenith of bloody clashes and terror actions that occurred between the June 7 and Nov. 1 elections. The Oct. 10 attack played a major role in radically changing voters' perceptions and directly affected their political choices in favor of the AKP.

According to the “Turkey’s Pulse” survey carried out by Metropoll Strategic and Social Research Center, responses to the question “What is Turkey’s most important problem?” illustrate the link between the AKP’s election performance and changes in voters' perceptions.

Before the June 7 elections, when the AKP suffered a 20% vote loss, 64.2% of respondents cited the economy as Turkey's most important problem. This explains how the bad economic performance led to the AKP's loss.

In May 2015, those who cited terror as the most important problem constituted a negligible level of 3.7%. In July, after the Suruc massacre, the war with the Kurdistan Workers Party started and the perception of the country's biggest problem turned upside down. By September, those who ranked terror as the No. 1 problem shot up to 42.2%, although there had been no improvement in the economy at all. In the “Turkey’s Pulse” survey carried out Oct. 4-7, just before the Oct. 10 bombing, those who saw terror as the most vital problem went up to 47.2%.

It could be assumed that the suicide bombing three days later must have further reinforced voters' perception of the threat of terror.

This increased fear gave birth to a tendency in right-wing and conservative voters to abandon the search for political change and prodded them to gather around the authoritarian status quo. This situation played a major role in the AKP's electoral victory on Nov. 1 with a high vote margin that even the party had not anticipated.

What is interesting is that a major segment of AKP voters also think that terror gained votes for the AKP.

Metropoll conducted face-to-face interviews with 2,082 respondents in 28 provinces Feb. 6-11, asking, “Do you agree with the claims that terror incidents after June 7 increased the AKP's votes?”

An amazing development that followed the Cumhuriyet reports of gross dereliction by the police for not preventing the Oct. 10 attacks — reports also published by the leftist daily Evrensel — was the decision of the Ankara chief prosecutor to launch an investigation into journalists who had written the news reports, which he said made "targets of public officials who had taken part in the struggle against terror.”

But it seems that these reports, more than targeting public officials, were instrumental in illustrating the link between IS terror and the AKP’s election victory Nov. 1.