Why do some Turks approve of Islamic State terrorism?

Turkish football fans' disruption of moments of silence for victims of Islamic State attacks in Paris and in Turkey show support for IS and stem from the domestic and foreign policies of Recep Tayyip Erdogan. 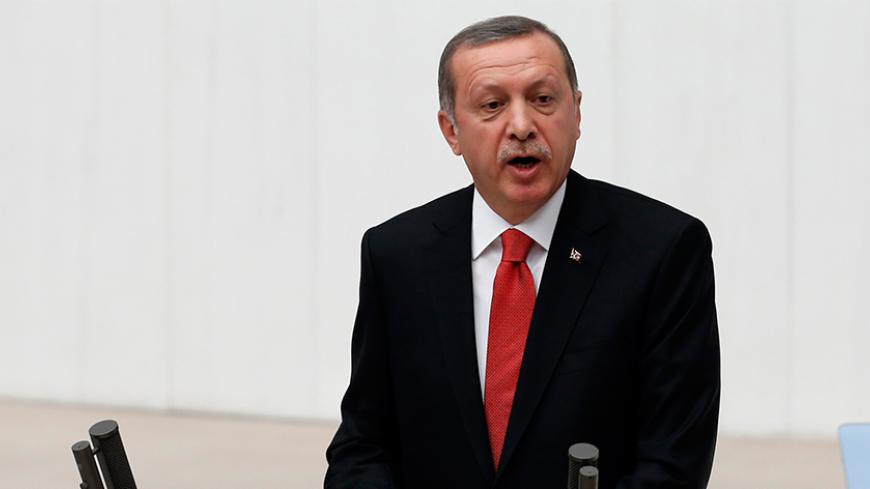 Turkey's President Recep Tayyip Erdogan addresses the Turkish parliament during a debate on the Islamic State and other terrorist groups in the region, Ankara, Oct. 1, 2014. - REUTERS/Umit Bektas

On Nov. 17 at a friendly soccer match between Turkey and Greece, a group of Turkish spectators interrupted a minute of silence honoring the victims of the Nov. 13 Islamic State (IS) attacks in Paris, whistling, chanting slogans and shouting “Allahu Akbar.” There are three important reasons why this incident, at Istanbul’s Basaksehir Stadium, cannot be dismissed as an ordinary act of hooliganism.

First, the protest illustrates that a segment of Turkish society clearly approves of IS terrorism. Second, it reflects an alarming sense of estrangement from the victims and the communities to which they belong. This lack of empathy could well stem from the callousness of excluding “the other” (and possibly lead to one’s own sense of exclusion being transformed into radical hostility expressed in violent action). Third, the whistles and chants, which continued during the Greek national anthem, demonstrate how Turkey’s political culture has changed since President Recep Tayyip Erdogan’s Justice and Development Party (AKP) came to power in 2002.

For 13 years, large segments of Turkish society have been under the strong influence of a multifaceted project promoting Islamic conservatism, which the AKP has pushed systematically through its political leadership, the police and judiciary, the education system, the media, social networks and local administrations. The drive has markedly intensified since 2011, a milestone year during which the AKP won general elections with 50% of the vote, weeded out Kemalists in the military and embarked on a regional policy aimed at toppling the Bashar al-Assad regime in neighboring Syria.

The AKP government, which has evolved into the “Erdogan regime,” has sought through social engineering campaigns to permanently reshape Turkey and consolidate its power. Islamist radicalization has been one of the by-products of this political culture, which can generally be described as Islamist, pro-Sunni and Ottomanist. The whistles and chants of “Allahu Akbar” during the moment of silence in the Basaksehir district, an AKP stronghold, were the very reflection of this radicalization.

According to Cumhuriyet, members of the AKP’s youth branch, attending free of charge, had set off the disruption, which then spread among others in the stands. In other words, the daily's reporting traced the source of the disturbance to the government. The following day, Nov. 18, Erdogan criticized the incident, but the manner in which he did so pointed to the same source, albeit in a different way.

Remarkably, Erdogan focused on the booing of the Greek national anthem and ignored the disrespect for the minute of silence. In a live television interview, he said, “There was a minute of silence, after which the national anthems were played. And then those irresponsible people, probably a few hundred of them, started to boo. This is incomprehensible. We are not a nation incapable of tolerating even the national anthem of another country. That’s not in the genes of this nation. How would we feel if someone else did the same to us? One is supposed to listen through it quietly, and that’s it.”

Should one view Erdogan’s failure to condemn the disrespect shown for the Paris victims as an incidental omission? If so, then what about his failure to condemn the booing during the minute of silence held at an earlier international game to honor the Turkish citizens killed in the Oct. 10 suicide bombings in Ankara attributed to IS? Just a coincidence? Yes, within a month's time, Turkish football fans twice disrupted moments of silence held for victims of IS terror attacks. The first incident had occurred on Oct. 13, during a 2016 Euro qualifier between Turkey and Iceland in Konya, in central Turkey. A large group of spectators hurled boos and whistles during the minute of silence honoring the 102 people slain in Ankara three days earlier. Erdogan's lack of condemnation for this disruption is not the only thing the two stadium incidents have in common.

Given that the minute of silence in Istanbul was intended to honor Westerners, one could argue that mounting anti-Western sentiment in Turkey, the result of the regime’s social engineering, had played a part. This, however, would be an incomplete theory, because it fails to explain the incident in Konya, where the minute of silence was meant to honor Turkish citizens — mostly Kurds and Alevis — not Westerners. Rather, both incidents that Erdogan has declined to denounce constitute a reluctance to condemn IS and its terrorism. One can argue the episodes were separate expressions of hostility stemming from the identities of the victims in Paris and Ankara, but the minimal prerequisite for such reckless expression is the absence of any disapproval of IS. No doubt, the sympathy for IS and hostility toward the West and Alevis evident in Turkey today nurture each other, creating a cause-and-effect relationship.

Pollsters are yet to conduct a credible survey assessing how much sympathy IS continues to enjoy among Turks now that 134 of their compatriots — 102 in Ankara and 32 in a suicide attack in Suruc on July 20 — have been killed in attacks attributed to the group. An earlier survey, however, might provide an idea of its extent. The Marshall Fund’s Turkish Perception Survey, consisting of face-to-face interviews of 1,018 respondents in 16 provinces on July 4-13, found that 6.6% of Turks believe IS is not a terrorist organization, and another 15.6% said IS does not constitute a threat to Turkey. These figures are troubling figures for a majority Sunni country of 75 million people.

Furthermore, Turkish nationals have emerged as the perpetrators in all the bombings attributed to IS in the country thus far, indicating that people are being recruited from among the local populace. Hence, the link is established between the suicide bombings and the show of sympathy for IS in the bleachers. Yet, Erdogan insists the West is the source of the problem.

In the Nov. 18 interview, he blamed the West for the flow of international jihadists to Syria via Turkey, stating, “We don’t claim there are no Daesh [IS] militants in Turkey today. Foreign fighters have gone to Syria from France, Britain and Germany … They couldn’t have crossed from Turkey to Syria if we had received certain information [from the said countries]. What can we do if we don’t get information? Are we supposed to stop tourist entries and exits? They would then start screaming that Turkey has banned freedom of travel.”

True, “Daesh militants” are present in Turkey, as Erdogan says, but most of them are apparently Turkish nationals. The country’s IS problem today is a combined outcome of the government’s domestic politics and its Syria policy, which have enabled IS to organize and recruit fighters in Turkey.