Why some Turkish sports fans terrorize their opponents

Turkish sports fans' recent show of disrespect for moments of silence for victims of Islamic State terror and other occasions is not necessarily a show of support for the extremist group. 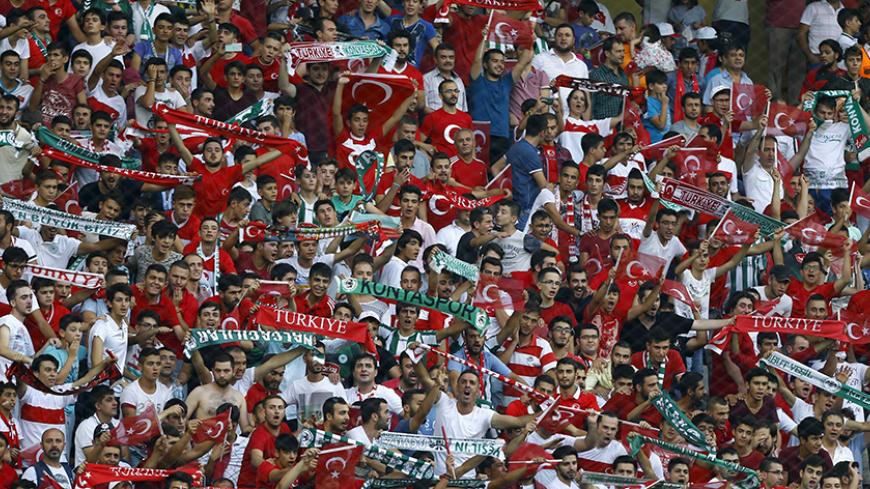 Turkish soccer fans cheer before the Euro 2016 Group A qualifying soccer match between Turkey and the Netherlands in Konya, Turkey, Sept. 6, 2015. - REUTERS/Umit Bektas

Disruptive and disrespectful actions by Turkish sports fans has been in the news in recent months. On Nov. 21, the Israeli women’s national basketball team became the victim of such behavior in Ankara at the European Championships. During the singing of Hatikvah, the Israeli national anthem, Turkish fans threw water bottles, coins and other objects at the Israeli players on the court. The incident, reported widely in Israel, barely made the news in Turkey.

Some fans at the basketball game applauded the violent acts of others in attendance. On Turkish social media, several tweets praised the disruptive fans while criticizing the arrest of eight people who had waved Palestinian flags. Even before the basketball game, some social media users had called on the government to cancel the match because of Israel’s ongoing conflict with the Palestinians.

What transpired at the basketball game cannot be viewed as a random incident. A sequence of high- and low-profile disruptions has taken place at sports arenas since the summer. Soli Ozel, professor of international relations at Kadir Has University in Istanbul, told Al-Monitor, “This has almost become routine. Teams from several nations have been mistreated. Israeli teams have been terrorized multiple times. Police forces and bureaucrats do not react as strongly as they would against anti-government slogans. We have only heard [Turkish President Recep Tayyip] Erdogan criticize the protests that took place during the Greek national anthem.”

The case Ozel refers to occurred Nov. 17 at a Greece-Turkey soccer match, which began with a minute of silence to honor the victims of the Islamic State terror attack in Paris on Nov. 13. The match was being held in Istanbul's Basaksehir district, a new suburb known for its conservatism and as a stronghold of various Islamist orders. The fans interrupted the moment of silence with booing, whistling and chants of "Allahu akbar" (God is great) and “Martyrs don’t die.” Erdogan said nothing about this behavior, choosing instead to focus on disruptions during the Greek anthem.

At an Oct. 13 soccer match in Konya between Turkey and Iceland, a moment of silence for the victims of the Oct. 10 terror attacks in Ankara, also attributed to IS, met with similar disruption. It was the first such event in recent years to break into the mainstream media. Most pundits promptly concluded that the protesters were IS supporters or sympathizers. Although these commentators could be correct in their assessment, none of them provided any evidence of contact with an actual protester to determine why they had chosen to be disrespectful.

Selin Nasi, a veteran columnist for the weekly Salom, told Al-Monitor, “All these protests have the same ideological roots. They are the notorious 50% of the population that Erdogan has referred to as ‘hard to keep in their homes.’ Since the June 7 elections, the anger and aggression has built up so much that it erupts at the slightest opportunity.”

In repressive regimes, aside from perhaps places of worship, stadiums are among the only places where the government cannot exert complete control. In Turkey, the religious avenue is closed, as imams are government employees, allowed to deliver only state-sanctioned sermons. As for sports, even before the 2013 Gezi Park protests, the Turkish government, aware of anti-government chanting during soccer games, had introduced Passolig, a mandatory, e-ticketing system to allow it to monitor fans' attendance.

Nigel Boyle, a political scientist at Pitzer College with expertise in the politics of soccer, told Al-Monitor by email, “There is in fact a long history of soccer becoming an outlet for protest under repressive regimes. There are examples from the Soviet Union (Dynamo Moscow fans), Chile (fans of teams other than Colo Colo, [dictator Augusto] Pinochet’s team), Iran (liberals, including women, protesting against the regime), Spain (Barcelona fans under [dictator Francisco] Franco) and Egypt (where 'Ultras' of soccer clubs such as Al Ahly were a form of opposition to the [Hosni] Mubarak regime). In European soccer, there is also a long history of xenophobia and racism from soccer fans, though this has dissipated in recent years, in part because soccer is so ‘cosmopolitan’ (harder to be racist when your best player is black or Arab).”

Mois Gabay, another Salom columnist, told Al-Monitor, “One of these protesters, when he was escorted out of the stadium, shouted at the cameras, ‘We are only against unbelievers and murderers.’” Given that even the most popular sport, soccer, is forbidden by IS, and those who are caught watching it are brutally punished, and given that IS has asked FIFA to deprive Qatar of hosting the World Cup in 2022, why would IS supporters be eagerly attending sports events in Turkey and other parts of the world?

Although growing support for IS in Turkey was evident in the summer of 2014, the case remains unconvincing that the protesting soccer fans did so in support of the organization. Twenty young men from groups in Basaksehir and Konya agreed to speak with Al-Monitor on the issue.

A.K., a 34-year-old coffee shop manager from Basaksehir with three kids, said, “I love soccer. I am also a pious Muslim. If others are chanting ‘Allahu akbar,’ I will join in. I played soccer when I was young, just like Erdogan. I whistled because although I feel sad for the Paris victims, many Muslims died as well; I do not want to commemorate the victims with Western rituals. We are not their puppets. This minute of silence is alien to us. We don’t mourn like this. Do the Westerners shout ‘Allahu akbar’ when there are thousands of deaths in Syria, Yemen, Lebanon or Afghanistan? No. Then why should we be respectful in the way that they want us to be? This is just degrading.”

K.T., a 45-year-old shoemaker from Konya with six kids, told Al-Monitor, “I took posters of [former Egyptian President Mohammed] Morsi to the soccer game, but the cameras did not show them. There were hundreds chanting. Then I heard the white Turks claim we support IS. This is just outrageous. It is because they do not understand Islam and our values. Any news with IS in the headlines is popular, so we are labeled as IS supporters. If that is the only way we can get attention, so be it.”

N.Y., a 22-year-old university student, said, “Yes, I have friends who support IS, but they do not enjoy soccer matches or music or movies anymore. I do. I like the idea of the caliphate as well, but not the brutality. I don’t support violence or the torture of women or kids. I protested during the one-minute silence because this is not the way to show your respect for the victims of Ankara. IS killed them, not us. Plus, this is the place where we can show our frustrations about life. If you scream ‘Allahu akbar,’ you are safe, but you cannot criticize the government or leaders. I just have to scream sometimes.”

Although support for IS in Turkey, as in other parts of the region and in Europe, is worrisome, there is no evidence for collectively branding disruptive Turkish fans as IS supporters. Perhaps like those who talked to Al-Monitor, they are simply channeling their built-up frustrations in the only place available to them to protest.