Turkey running out of native soccer players to sing anthem

Turkish soccer is facing an invasion of foreign players while failing to train promising locals. 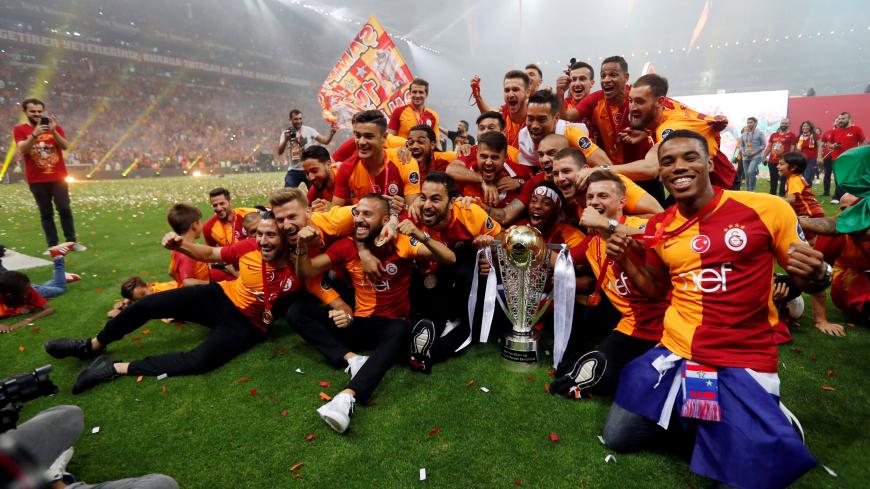 Turks love to boast about locally made products. But these days, you can see foreign influence everywhere — in imports of fruits, vegetables, meat and even hay for cattle.

In the past four years, soccer has joined the list.

With the booming number of player imports, it is sometimes hard to see a native player in Turkey’s Super Cup soccer league. How did this come about? The Turkish Football Federation (TFF) in January 2015 decided to allow as many as 14 foreign players on each soccer team with a roster of 28 players. Smaller teams of 11 players are allowed to fill their rosters completely with foreigners. The game is played with 11 athletes on the field.

Medipol Basaksehir, the team that now leads the Super League, has taken advantage of the rule, with 14 foreign players in its total roster of 28. It's not alone. Galatasaray, No. 2 in the standings, also has 14 foreign players. Third place Besiktas has 12.

Fenerbahce, one of the big three clubs and certainly the most popular, this year is performing miserably and sits at the bottom of league standings. It has 13 foreign players and it frequently shuffles them around, buying and then selling them off as they disappoint. This keeps the club in news headlines.

Even Akhisarspor, which made amazing strides as a small-town team and was promoted to the Super League, now has 13 foreign players.

Many teams, led by Galatasaray, take the field with 11 of their 14 foreigners. In Turkish soccer leagues, the national anthem is played before the games, but when the foreigners don’t know Turkish, it's left to the spectators to carry the song. Foreigners play and Turks watch, yet it's called the “national league.”

Sinan Akman, who was a dedicated Galatasaray fan, told Al-Monitor, “If I wanted to watch foreign soccer, I would go and watch the best foreign teams like Real Madrid, Barcelona and Manchester United. I don’t know my country’s teams anymore. I am not a fan of any. We see that the foreigners on our teams are not doing well in European cup games. Remember, when Galatasaray won the Europe Cup [in 2000], most of its players were Turks.” He was referring to the UEFA (Union of European Football Associations) Super Cup.

Sports writer Lutfi Ozel has a different view. “I'm not against increasing the number of foreign players. Soccer is a show. We should pay more attention to the infrastructure like training local players. Don’t forget we are also exporting players trained by locals. For example this year, Galatasaray’s Ozan Kabak was transferred to Stuttgart, Germany, for 12 million euros [about $13.6 million]. Arda Turan played in Barcelona. We have many Turkish players abroad. Just like we sell ours, it is normal for us to buy foreigners. Soccer has become a major industry of imports and exports,” he told Al-Monitor.

When half of the players on a team are foreigners, Turkish soccer doesn’t advance.

When it approved 14 foreign players in 2015, the official TFF created a fund to encourage training of local players and decided to transfer funds made from foreign player imports to be used for that goal. Accordingly, between 100,000 and 6 million lira ($19,000 and $1,130,563) is deducted from the fees on imported foreigners, ostensibly to be used to develop the skills of local players.

But it has gradually become clear that the plan was not working; not even a single Turkish standout from a country of 82 million has been "discovered."

Former Minister of Sports Erdogan Toprak told Al-Monitor the rule has to change — to reduce the number of foreign players to five. He said, “The national team has collapsed. Teams trained by good coaches are entirely made up of foreigners.”

He added, “Foreigners represent Turkish clubs in European cups. But we have to upgrade the experience of local players by exposing them to international games so that our national team can benefit. Why don’t we have successful local players? We have to orient our youth to sports and education. We must protect our youngsters from straying to drugs and terror. We have to find new local role models. Only then will millions of dollars of exorbitant transfer fees remain in the country and more local players will be trained.”

Romanian Mirae Lucescu, technical director of the national team, has echoed Toprak. While Turkish coaches were chasing foreign players, Lucescu was complaining of the scarcity of high-level local players, saying, “I can’t even find Turkish players to watch in Super League games."

The situation clearly reflects the dilemma of Turkish soccer. Lucescu, who was facing a shortage of well-trained Turkish players, did not succeed in international games and had to resign his post recently — mainly because of angry media and public reactions.

Ozel, the sports writer, noted that technical directors in all Super League teams are local. These directors have a major say in player selection. So it seems local directors prefer to work with foreign players.

What about the attitude of European teams?

Spain, Italy and France have limited non-EU players to four in their clubs. The United Kingdom and Germany have no limits.

Turkey had decided to try the 14-player rule for four seasons. This is the final year, and the national soccer federation will again discuss the issue. Most observers expect the federation to first lower the number of foreign players allowed to eight and then to four or five.

But there is a formula to bypass the restrictions: Make foreigners local. That's possible by buying them a $250,000 residence. For foreigners who come to Turkey for millions of euros to play soccer, this figure is not important. With the Turkish citizenship they will purchase along with a house, foreign players will remain in Turkish stadiums.