Turkish President Recep Tayyip Erdogan's promotion of a soccer team that subscribes to conservative Islamic values has more so polarized fans than won them over. 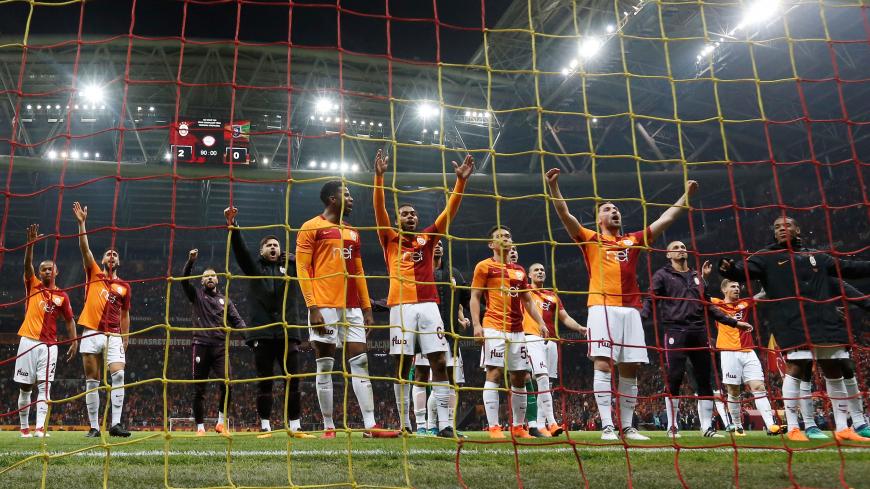 Galatasaray players celebrate in front of fans at the end of the match between Galatasaray and Basaksehir in Turk Telekom Arena, Istanbul, Turkey, April 15, 2018. Galatasaray won 2-0 over a team promoted by President Recep Tayyip Erdogan. - REUTERS/Murad Sezer

For much of the 15-plus years that he has run the country, Turkish President Recep Tayyip Erdogan has largely had his way as he tightened his grip on power. So when a newish soccer team that he is overtly promoting lost 2-0 to Galatasaray — one of the country’s big three teams — in a Turkish Super League match on Sunday, his opponents reacted with glee.

Meral Aksener, a female right-wing nationalist contender for the presidency, gloated: “Galatasaray 2-0 Recep Tayyip Erdogan” in a tweet that had drawn 8,000 comments, 42,000 retweets and 117,000 likes at last count. Hasan Cemal, a prominent opposition columnist and die-hard Galatasaray fan, tweeted: “This victory is in a different league.” An angry Erdogan supporter riposted, “Recep Tayyip Erdogan will score the real goal in the 2019 [presidential] election.”

The lineup on both sides broadly mirrored the deepening polarization in Turkey, with the conservative Islamic values Basaksehir on one side, and Galatasaray — a team favored by the pro-secular, urban elite and middle classes — on the opposite. Galatasaray is also supported by millions of Kurds because the imprisoned Kurdistan Workers Party (PKK) leader, Abdullah Ocalan, is a big fan. This is because — so the rumor goes — the juxtaposition of the team’s yellow and red colors with the green of a soccer pitch evokes the PKK flag. At the end of the fixture, thousands of Galatasaray fans began chanting, “We are Mustafa Kemal’s soldiers,” referring to Mustafa Kemal Ataturk, the founder of modern Turkey.

If the same constellation of opposition groups (the pro-secular opposition and the Kurds) could join forces against Erdogan in the presidential polls, they could defeat him in the first round of polling. But for now, that’s a long shot.

The match was soaked in politics from the minute Erdogan pulled up at his ruling Justice and Development Party’s (AKP) Basaksehir branch a day before the game took place. “We want Basaksehir to aim for the championship in the politics league just as in the soccer league,” he said. He then proceeded to scold officials for failing to secure a big enough audience at games played at the Basaksehir stadium. “For as long as we are not present in these fields, we will be weak in politics as well,” Erdogan grumbled.

The Basaksehir soccer club was originally part of the Istanbul Metropolitan Municipality league, where Erdogan, formerly a semi-professional soccer player, made a mark as a forward.

It was rebranded in 2014 as Basaksehir Medipol and was infused with cash, allegedly by Erdogan's businessmen cronies. It swiftly clawed its way to the premier league. The club has since recruited some big names, like Barcelona’s Arda Turan, who is also an ardent Erdogan supporter.

The idea of Basaksehir — an urban sprawl dotted with ugly high rises on Istanbul’s European side — belongs to Erdogan, according to Ayse Cavdar, a Turkish sociologist who lived in and studied the space. When he was mayor of Istanbul in the early 1990s, Erdogan conceived of a gated community where pious Muslims could live their lives free from the scrutiny and restrictions imposed by the country’s then-powerful generals. Alcohol was hard to come by. Women in headscarves could find jobs. Many of its streets were named after Muslim thinkers. The county became emblematic of a rising pious middle class that long thrived under the AKP.

In the 2017 referendum on Erdogan's long-coveted executive presidency, 54.8% of Basaksehir voted in favor, but the "no" votes prevailed, albeit narrowly, in Istanbul. The "no" vote result that was repeated in the capital of Ankara and in Bursa, another AKP stronghold, was a big blow to Erdogan. In a bid to avoid further setbacks, Erdogan is looking to cover all bases ahead of triple elections — municipal, parliamentary and presidential — that are due to be held next year. Locking up his critics is one method. Investing in soccer, Turkey's favorite national sport, is another.

Yet, as Cavdar observed, Erdogan’s relationship with Basaksehir has been riddled by disappointment. For instance, when Erdogan — who by then had become prime minister — inaugurated in February 2011 Basaksehir's biggest shopping mall, built by a pro-AKP businessman, only 2,000 people showed up. “When I asked people why they hadn’t shown up, the answer was ‘the weather is too cold,’" Cavdar recalled in a paper titled “Basaksehir: A Lifestyle Under Construction.”

In his pre-match address delivered at the stadium, Erdogan noted that the elements should not be an excuse for low turnout. “Snow, winds, hurricanes will be quieted by, and the faithless will stand to attention before, the Basaksehir I know,” he declared. Listening to Erdogan’s tirade, few would guess his favorite team is Fenerbahce, one of the big three.