Turkey’s soccer sector has hit rock bottom as power struggles as well as financial and structural difficulties set in. 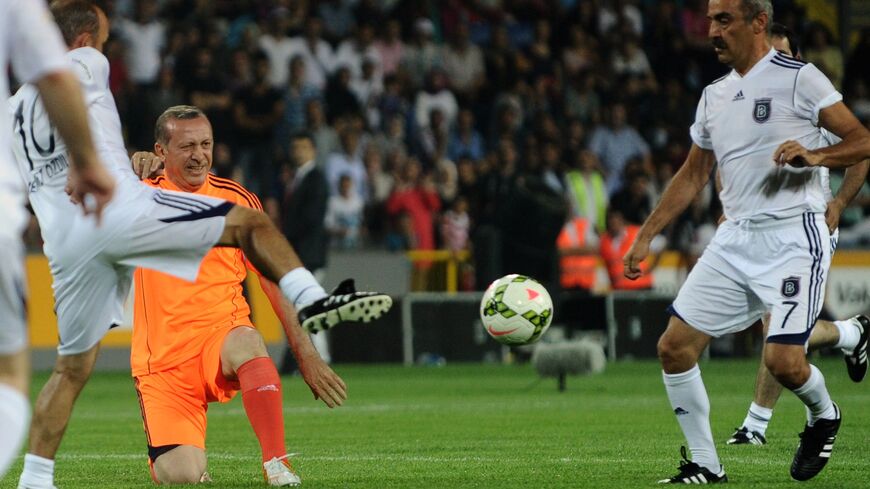 Between a series of resignations at the top, a standoff with global soccer associations over sacking Turkey’s internationally acclaimed referees, rumors of selling one of the country’s oldest clubs to a Russian oligarch and a new sports law that experts call a “coup,” Turkey’s soccer sector is having an exciting season — and it is mostly off the field.

“This is one controversial season for Turkish soccer. In terms of refereeing, club management and national-level soccer governance, we have hit rock bottom,” said international relations associate professor and Kadir Has University Sports Studies Research Center advisory board member Ozgehan Senyuva. “Many fans of Turkish soccer have abandoned the national league and started watching other European leagues, especially Britain’s Premier League. You can have soccer without fans, but not without spectators.”

The downward spiral of the Turkish national men’s soccer team — exacerbated by the economic crisis and inter-elite conflict within the highly politicized management teams — was demonstrated by the red and white’s failure to secure a place in the 2022 World Cup to be held in Qatar — the fifth time in a row they have failed to qualify for the global event.

Shortly after this disappointment, Nihat Ozdemir, a construction mogul who held the reins of the Turkish Football Federation (TFF) for the last three years, stepped down. “I have been pondering about stepping down for the last six months,” he told the local media. “It is impossible to work with those people who say one thing behind closed doors then go and do something entirely different.”

Turkey’s vocal sports commentators maintain that Ozdemir’s resignation has less to do with the sport's decline and more with his lack of ability to manage intra-elite conflict within the powerful federation. While resigning, Ozdemir pointed an accusing finger at Goksel Gumusdag, chairman of Basaksehir Club and President Recep Tayyip Erdogan’s relative. A new name emerges every day for a possible successor to Ozdemir, and that's likely to continue till the elections in June. Gumusdag, along with Ridvan Dilmen, a former soccer player and an unwavering supporter of Erdogan, is among the candidates.

“It is likely that the next chairman would be a person approved by the president, if not downright handpicked by him,” Senyuva said, pointing out that Ozdemir and his successors had been figures close to Erdogan and his ruling Justice and Development Party (AKP). “Cronyism and politicking have always been present in Turkish soccer, as elsewhere. The AKP just carried it to the next level.”

Ozdemir, listed by Forbes as the seventh richest man in Turkey with a personal fortune estimated at $1.9 billion in 2022, is co-founder and honorary chairman of Limak Holding, which built Istanbul's two airports. Limak is considered to be one of the Gang of Five, the moniker for five construction companies that get lucrative government contracts. The Diyarbakir-born businessman has been the deputy chair of Fenerbahce, one of Turkey’s big three Istanbul teams that has been the home of huge egos, financial mismanagement and political horse-trading. When Yildirim Demiroren — chair of the Demiroren holding that owns a good chunk of Turkey’s media outlets — stepped down from the TFF's top chair, Ozdemir took the seat at the personal request of Erdogan, according to some commentators.

“Ozdemir is the embodiment of bad governance in Turkish soccer, which [has been] dogged by economic and structural problems for decades,” Senyuva, author of internationally cited research on Turkish soccer, told Al-Monitor. “The Turkish clubs have high expenditures — which are in dollars or in euros — and low income, which they gain in Turkish liras mostly from selling tickets. Their finances are in dire straits as Turkey’s currency keeps losing value against the dollar.”

The currency crisis makes it difficult for Turkey’s soccer clubs to obtain top trainers and top players from abroad. The attempts by the government and the clubs to raise local young stars were upended by COVID-19 restrictions. “Worse, most youth leagues lack even the most basic needs such as accessible soccer fields to train on,” Senyuva said.

“The financial difficulties coupled with structural problems have altered the dynamics of Turkish football in relation to the European leagues. The gap between the European leagues and Turkish and other smaller leagues such as that of Netherlands, another football-loving nation, became wider,” John McManus, an anthropologist and author of  “Welcome to Hell? In Search of the Real Turkish Football,” told Al-Monitor. “When I came to Turkey in 2008, Fenerbahce had gotten to the quarterfinals of UEFA Champions League. “No Turkish fan expects a similar victory today.”

Two other crises have further disenchanted both the COVID-hit soccer industry and soccer fans. After repetitive complaints from soccer teams on referee faults, the TFF's Central Referring Committee decided to strip 13 Turkish referees, including high-profile names who have officiated international games, from their duties. The decision went beyond Turkey’s borders, as both the UEFA and FIFA chided the decision. To make things worse, the decision was overruled by the Federation’s Disciplinary Board, resulting in top-level resignations — including that of the deputy chair for legal affairs.

The other blow was the failure to finalize a deal on the broadcasting rights of the top-tier league, which are tendered every year. The top bid of $150 million from current rights holders BeIN Media Group and Digiturk was rejected by the federation as too low. “We have held a meeting and we are far from reaching a deal [with Qatar-based BeIN],” Ozdemir said shortly after he retired.

With no hefty sum from broadcasts, Turkey's heavily indebted soccer clubs would be in a legal bind. The big four — Galatasaray, Fenerbahce, Besiktas and this year’s champion, Trabzon — all signed debt-restructuring deals with banks last year. They owe a total of $750 million, more than three times their annual revenue.

But the constant delaying of debts may come to an end with a new law drafted by the AKP and its political ally, the Nationalist Movement Party (MHP). The law, which was passed by the parliament’s Youth and Sports Committee in mid-April, currently changes the status of clubs from “association” to “corporation” and tightens the rules on debt. The text says that the clubs cannot have debts exceeding 10% of the previous year’s revenues and pledged to hold chairmen and presidents liable. It also extends the powers of the sports and interior ministries over the clubs, including closing them down.

“The draft law does not aim for a restructuring of the clubs and a solution to the debt crisis, but simply subscribed penalties, including up to three years of imprisonment, for mismanagement and making debts,” said Tugrul Aksar, an academic studying the economy of Turkish soccer.

But Saffet Sancakli, a former soccer player and the MHP deputy who co-authored the bill, says that tighter control is the only way to bring change to debt-ridden clubs. “They should stop spending beyond their means [on foreign players] and invest in bringing up local talent,” he said as he defended the bill in parliament.

Both Senyuva and McManus maintain that the main question is just how the new law would be implemented. For example, what would happen to the clubs that would not be able to settle their debts? “I think the big four is just too big to fail,” said McManus. “No government would want to be the one to close one of them down.”

But the new law may further discourage businessmen who are already having second thoughts after buying a soccer club or are in the administration of one. Mehmet Sepil — a maverick in the field of energy — bought Goztepe, the 98-year-old team of his hometown Izmir, in 2014, with a pledge to bring it to the Super League and build the team’s own stadium overlooking the bay. But less than a decade after the much-celebrated buy-in, he declared that he was ready to sell it off. Rumors point out that Russian oligarch Roman Abramovich may seek to buy it, though this is firmly denied by Goztepe.