How will Erdogan solve 'terror problem' that brought him victory?

Turkish President Recep Tayyip Erdogan may face some high-cost moves to put the terror and chaos genie back into the bottle after unleashing it to make up for his party’s June electoral failure. 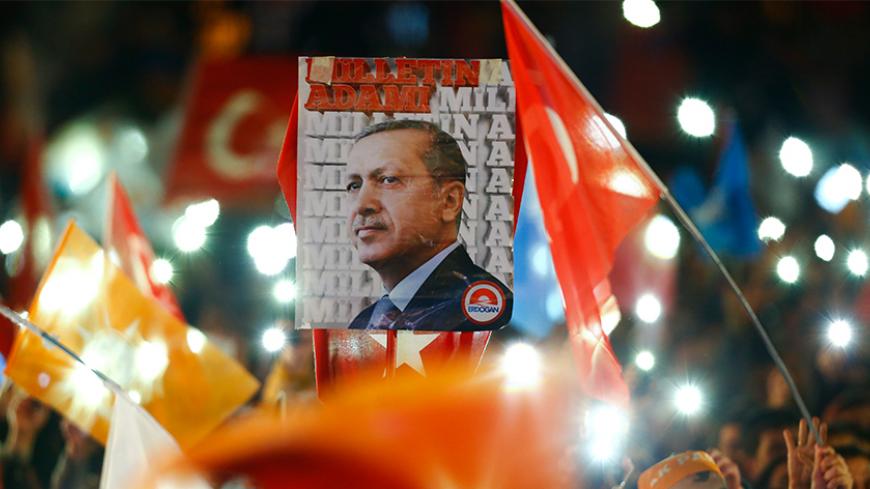 People wave flags and hold a portrait of Turkish President Recep Tayyip Erdogan as they wait for the arrival of Prime Minister Ahmet Davutoglu in Ankara, Nov. 2, 2015. - REUTERS/Umit Bektas

The 49.4% of the vote the Justice and Development Party (AKP) got in the Nov. 1 elections beat all forecasts, astonishing not only Turkey and the world but the party’s own quarters as well. How the AKP was able to boost its vote by a fifth in only five months after losing its parliamentary majority with 40.8% in June is now an imperative question.

With an outcome of such an extraordinary nature, the AKP — a party supposed to have fatigued and lost some appeal after 13 years in power — must have resolved some major problem in Turkey in five months’ time or convinced part of the electorate that only the AKP could resolve that problem.

And what is this problem? For an accurate diagnosis, one needs to compare the two different Turkeys that existed ahead of the June 7 and Nov. 1 elections. There was only one new problem that emerged after June 7: the resumption of bloody clashes with the Kurdistan Workers Party (PKK) and suicide bombings blamed on the Islamic State (IS).

A relative calm preceded the June 7 polls, while the clashes between the PKK and government forces, which erupted July 24, resulted in hundreds of dead in the runup to last week’s vote. In addition, a suicide attack in Suruc on July 20, followed by twin suicide bombings in Ankara on Oct. 10, claimed a total of 134 lives, with both carnages blamed on IS.

After nearly three years of nonhostility — coupled with settlement talks between the PKK and Ankara — Turkey had abruptly descended into a spiral of violence, and coffins of soldiers and policemen arrived almost daily to provinces across the country. This new situation was, of course, bound to upend the electorate’s “problem perception” — a major factor swaying political preferences. And this shake-up explains to a large extent the AKP’s electoral victory.

In September, the Ipsos Social Research Institute’s “Turkey Barometer” survey, conducted in 15 cities among 1,319 people, found that 72% of Turks saw “the settlement process/terrorism” as the country’s “biggest problem.” The reason why the problem was defined by two seemingly contradictory terms — the settlement process and terrorism — stemmed from the fact that the survey’s questions were open-ended. In the survey’s August edition, the figure had stood at 47%. A 25-point increase in just one month reflects a dramatic shift in the perception of a “terrorism problem,” which funneled a great deal of votes to the AKP.

Now, let’s see how things stood ahead of June 7 before the “problem perception” turned upside down. The May findings of the same survey explain why the AKP failed in the June 7 polls. In the absence of conflict with the PKK and terror attacks attributed to IS, only 14% of Turks saw “the settlement process/terrorism” as the country’s main problem, while a staggering 53% put Turkey’s economic downturn on top of the list. And here comes the crux of the matter: Four months later, in September, those who believed the economy was the biggest problem were down to 12%, although economic indicators showed no improvement in the meantime.

All these figures speak of one thing: The new war against the PKK, launched as a deliberate political choice by Recep Tayyip Erdogan’s regime, coupled with the bombings blamed on IS, suppressed the perception of the economic downturn as the country’s biggest problem, which had been a key factor in the AKP’s failure in the June 7 polls.

The climate of terror kept stoking fear, insecurity and threat perceptions among the electorate, reaching a climax in the wake of the Oct. 10 twin bombings in Ankara that killed 102 people. At that point, the security forces raided an IS safe house in Diyarbakir, killing seven militants, in what seems to have had a reassuring effect on the electorate. The operation also aimed to undo the perception that the government was behind the IS bombings.

As a result, a segment of voters who had abandoned the AKP in last year’s municipal polls and the June 7 general elections, unhappy with economic woes, corruption or the settlement process, and who had gravitated either to the far-right Nationalist Action Party or the Kurdish-dominated Peoples’ Democratic Party (HDP), gave up their demands for political change under the strain of the mounting terror threat, opting for the continuation of the authoritarian status quo and handing back the AKP its strong parliamentary majority.

The regime’s media played a major role in ensuring this outcome. Equally influential was the huge government pressure on other media that severely curbed press freedoms. All in all, the government managed to convince the conservative Sunni electorate that it was the PKK that had reignited the conflict and ended the settlement process. Thus, those voters put no blame on the AKP for the climate of terror. The opposition, meanwhile, failed to convince them of its own credibility as an alternative, further facilitating their return to the AKP.

In short, the Erdogan regime won the elections by adding new problems to Turkey’s already hefty load of them and then convincing part of the electorate that only the AKP could resolve them. The credit should go to Erdogan as the architect of an exceptional tactical victory achieved with Machiavellian cunning.

The outcome may have given the regime another four years in power, but Erdogan and the AKP should now get down to business to sort out the conflict with the PKK and gratify the voters. And the only way to do this is the revival of the process to settle the Kurdish issue.

Will this process be linked to a new constitution and Erdogan’s aspirations to introduce a presidential system? We have to wait and see. The parliamentary arithmetic, however, is favorable. The AKP has 317 seats and the HDP 59. Provided the two parties reach a compromise, their total of 376 seats allows them to draw up a new constitution and enact it directly, without even going to a referendum.

Should the settlement of the Kurdish conflict become the subject of bargaining in return for a new constitution installing a presidential system, the real question will be how high the PKK’s military and political leadership puts the bar. This time it is likely to impose tougher negotiating terms on Ankara since the PKK today is in a much stronger position than in late 2012, when the previous settlement process kicked off. As a result of the policies Erdogan and Prime Minister Ahmet Davutoglu have pursued vis-a-vis Syria and the Kurds, the PKK and its Syrian offshoot, the Democratic Union Party, have become allies of both the United States and Russia. The two Kurdish organizations also are allies of Iran and the Damascus regime. Such bonds could now make it easier for outside actors to exert indirect adverse influence on Turkey’s Kurdish problem.

If the PKK raises preconditions that are extremely hard to accept, such as a demand for autonomy, Erdogan will find himself facing a tough dilemma. The discussion of autonomy is likely to stir nationalist outrage and thus hamper the making of a new constitution. The alternative, however, cannot be the continuation of the war with the PKK.

Erdogan was able to win the elections by augmenting Turkey’s problems. Now, these problems are bound to grow further unless he finds urgent solutions.