Why is Turkey's government choosing to protect itself instead of its citizens? 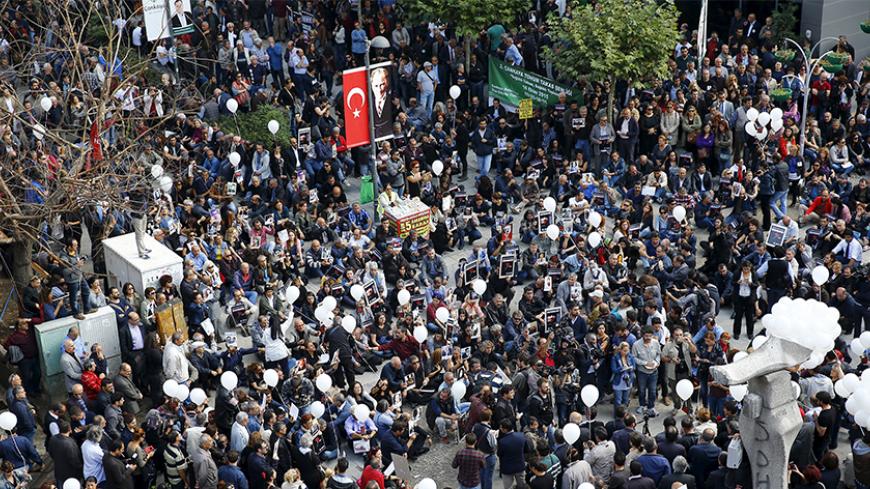 Demonstrators hold portraits of those killed by Saturday's suicide bombings as they attend a commemoration in Ankara, Oct. 13, 2015. - REUTERS/Umit Bektas

Oct. 10 started out as a normal day. People of all kinds, mostly young, assembled slowly in front of the train station in Ankara to participate in the "Labor, Peace and Democracy" rally organized by the pro-Kurdish Peoples' Democratic Party (HDP). Also attending were members of the Confederation of Revolutionary Labor Unions, other leftist labor unions and professional nongovernmental organizations.

At 10:04 a.m., two suicide bombers, separated by about 50 yards and three seconds, detonated their explosive-packed vests that were equipped with roughly 20-30 pounds of explosives, reinforced with RDX and steel balls to increase fragmentation. The human toll was high: According to the latest official data from the government, at least 97 were killed and 160 sent to hospitals, with 65 in serious condition.

Security officials are certain the attack was carried out by live bombers because there were no craters where the blasts took place, as there would be if a car or parcel bomb had been used. Also, the fragments were particularly deadly. Investigators are focusing on identifying the attackers using evidence from the scene, coroner’s reports, closed-circuit TV recordings and cellular telephone records. But already the media is carrying reports, attributed to police, that one of the bombers allegedly was Yunus Emre Alagoz.

Who is Yunus Emre Alagoz? He was a good friend of Orhan Gonder, who on June 5 allegedly set off a bomb at HDP’s electoral rally at Diyarbakir, causing casualties.

More importantly, he is the older brother of Seyh Abdurrahman Alagoz, who in July allegedly detonated a bomb in Suruc that killed 23 people.

According to an article by Ezgi Basaran of Radikal, police in Adiyaman — which gained notoriety as the city sending the most volunteers to the Islamic State (IS) — have a list of 15 youngsters who had gone to Syria. That list, which included Yunus Emre Alagoz, was sent to the entire police force with a request that the youngsters be arrested.

The fact that these 15 youngsters have evaded capture despite the high-profile Diyarbakir and Suruc attacks naturally raises the question of whether there is a prevailing security and intelligence weakness. Basaran ends her article with a basic question: “If journalists can track them down, how come the intelligence services of the state can’t?”

Although all arrows point to IS as the perpetrator of the attacks, confusion reigns over who might have helped. So many people are looking for the answer in the country's political polarization as the Nov. 1 general elections approach.

The HDP points to the state as the abettor and criticizes Justice and Development Party (AKP) elites and President Recep Tayyip Erdogan. HDP Co-chairman Selahattin Demirtas, in his first reaction to the Ankara attack, blamed the state, saying it has become a "mafiosi" operating "as a serial killer.”

On the AKP front, the favorite abettors are the Kurdistan Workers Party (PKK) or Syrian President Bashar al-Assad's regime. To the latter two, IS "is but a subcontractor." The AKP also alleges possible links to the United States and Iran.

The current minister of EU affairs and also a professor of international politics, Beril Dedeoglu, points to IS as the abettor, but she is not certain that the true instigator is IS. Dedeoglu said, "When I looked at the location of the attack and people targeted, I noticed that the attack may not be confined to the region. It could be [IS]-PKK, or militants who united, but my feeling is that the decision was taken with the provocation of some other countries.”

In short, the uncertainty surrounding the identity of the abettors has allowed both the HDP and the AKP to promote their own narratives and obtain the full support of their constituencies. The abettor debate will be one of the key dynamics of the approaching elections.

Problems and uncertainties characterize investigations of cases involving IS perpetrators, such as the Nigde clash between IS militants and Turkish security personnel; the Diyarbakir bombing in June; and the Suruc bomb attack in July. All these cases illustrate the difficulties of achieving a correct, swift and impartial judicial process when IS is implicated. Although it is too early to know for sure, the judicial process of the Ankara attack appears to be infused with the same uncertainty. The public prosecutor asked for and received Oct. 12 a ruling that clamped down on judicial process secrecy.

The Turkish Penal Code in cases where the investigation may be jeopardized allows prosecutors, subject to decision of the judge, to restrict the access of lawyers to study files or copy documents. This certainly obstructs the accused's lawyers from obtaining data and documents. Several lawyers Al-Monitor reached by phone have vehemently emphasized the immediate need to cancel this ban, to ensure the legal process is free from political manipulation and open to public scrutiny.

Meanwhile, it does not escape notice that IS is under heavy pressure from growing military cooperation between the United States and the Kurdish Democratic Union Party in northern Syria and by the Syrian army's move to expand eastward with air and ground support from Russia. IS seeks to ease the pressure by trying to expand its front lines toward Turkey. For Turkey, that reality — along with the efforts of IS militants and other opposition groups that want to flee Syria to Turkey — is a long, dark tunnel with no exit in sight.

How, then, can Ankara overcome the shock waves of the bombing that have shattered state-society and state-individual relations?

It is important to learn the identity of the abettors in the bombing. It is also certainly the right time to seriously ask how Turkey could be so splintered. Many foreign ambassadors based in Ankara have visited the scene of the attack to express their condolences. No AKP, Nationalist Action Party deputies or political dignitaries have done so.

Another reality that has emerged is the need to restructure Turkey's traditional security approach and replace it with a new security concept based on human elements. The Ankara attack has proved that when the state is excessively concerned with protecting itself, it may overlook the security of its citizens.

The question Ankara has to deal with now is how to simultaneously deal with the PKK, which is challenging the state's legitimacy, and IS, which is manipulating the sectarian and ethnic fault lines of the country.