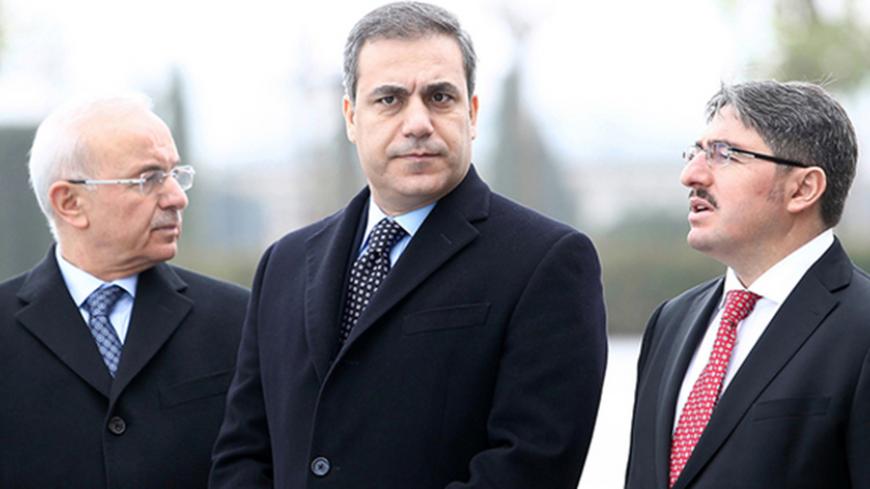 In 2013, Al-Monitor columnist Amberin Zaman penned a piece for another publication titled “Hakan Fidan, So Very Sexy” to explain how crucial Fidan's role as director of Turkey's National Intelligence Organization (MIT) is in Turkish politics — hence, the media’s persistent focus on his actions.

Intelligence agencies are not spared when there is a failure, and the MIT has been no exception. Consecutive terror attacks, leaked private conversations and foreign policy mistakes have all been major headaches for Fidan. In a sense, he has been President Recep Tayyip Erdogan’s shield. After finding multiple chinks in his armor, we now see some signs of change for Fidan.

On April 7, news broke that Mustafa Tanriverdi, the head of the weapons factory of the state-owned Mechanical and Chemical Industry Corp. (MKE), had been taken into custody for allegedly trying to sell weaponry design secrets to a US firm. The charges against him are serious and multiple: taking bribes, profiting from state secrets, military espionage and treason.

Al-Monitor recently spoke with three senior MIT bureaucrats on a conference call. They explained that Tanriverdi is an engineer who is fluent in English as well as in German and had acquired a master’s degree in Germany. He has been working for the MKE since 1987. The MIT officials told Al-Monitor they found 29,000 euros (about $33,000) and $1,500 in foreign currency while searching Tanriverdi’s house after his arrest. There were also 50-60 CDs with various weaponry designs and technical information considered state secrets.

Tanriverdi’s also is suspected of having earlier sold a design to a Turkish firm and another to a European firm, MIT officials said.

The buyer in this recent case, whose name was not released, is a Turkish national operating a weapons factory in the United States. Turkish media reported that Tanriverdi was arrested at the buyer's request, but the MIT says that wasn't the case. In late November, MIT counterespionage agents observed Tanriverdi communicating with foreign groups allegedly linked to illicit weapons trade and nuclear material trafficking.

“Our determination to curtail different sources of support for terror organizations led us to Tanriverdi,” the officials said.

The agency began tracking all of Tanriverdi’s cyber and digital movements at his office and house, monitoring his computers and phones. This process led Turkish agents to the buyer, who was recruited as an asset for the MIT and is now under its protection.

Tanriverdi agreed to sell design secrets for two different types of weaponry that the MKE has been developing for years. One of them is the MPT-76 national infantry rifle. An active-duty colonel with the Turkish Armed Forces told Al-Monitor on the condition of anonymity, “This rifle is being introduced to gradually replace the G3, which we have been using for almost four decades. Many of its features are borrowed from the AR-10, but it has several unique features as well.

"First, it is light and its pistol grip is comfortable. Second, it has many options to customize. You can use or detach the carrying handle or add on gadgets such as night-vision options or other tactical gear. It is user-friendly, so young conscripts can adapt to it fast. For example, it has fire controls and magazine release on both its left and right sides, which is a rather rare feature.”

Turkey is now producing all parts for the rifle — about 200 different sections, the colonel explained.

The MPT-76 was the result of five years of research at a cost of $18 million. Indeed, Tanriverdi allegedly used these investment figures to bargain with the US firm. He initially had asked for $360,000, saying that amount was 2% of the production cost and the price could not be lowered, according to the MIT officials. Yet the buyer bartered the price down to $300,000. Tanriverdi also allegedly agreed to trade the design secrets of the MP-5, another rifle, for 200,000 Turkish liras (about $71,000). A bureaucrat in Tanriverdi’s position receives a monthly salary of roughly 6,000-7,000 Turkish liras ($2,100-$2,500).

The final stage of this whirlwind spy story took place at Cicek restaurant in Ankara. Officials say Tanriverdi exchanged the rifles’ plans for money, while all his moves were being recorded by multiple cameras. As he stepped out of the restaurant, he was taken into custody. Tanriverdi has publicly accepted the charges and said he regrets his actions.

Social media reactions to the case have been intriguing. While pro-government media portrayed it as an arrest worthy of a spy movie, others said Tanriverdi has donated money to Erdogan’s election campaign, and supposedly had attended the Justice and Development Party (AKP) political academy.

However, what is being described on social media as a political academy is nothing more than a simple seminar that all bureaucrats could attend. Unfounded allegations on social media about Tanriverdi being an AKP member or the arrest being a conspiracy indicate Turks are not sure how to interpret a successful operation by their intelligence agency.

There are four initial observations we can make following this story. First, the MIT is negotiating a steep learning curve, particularly regarding counterespionage cases. Second, all domestic agencies, particularly those dealing with security issues, weapons production and design, are under strict surveillance. Third, the MIT has signaled that it is flexing its muscles on arms smuggling and illicit weapons trafficking on Turkish soil, as well as protecting the country's national patents in the defense industry. (Defense and technology patents are likely to become a major issue in Turkey, considering Erdogan’s soon-to-be son-in-law’s factory produces drones.) Last, we should expect standard procedures for acquiring security clearance to become more complex for both bureaucrats and external contractors.

So if success makes political power sexier, then we can conclude that the MIT's rating on the sexiness scale has just been kicked up a notch. Now the question is, will this be a one-time success or will it be one of the first in a line of achievements?