There are questions being raised about the wisdom of Turkey's expensive defense expenditures — but not by the public. 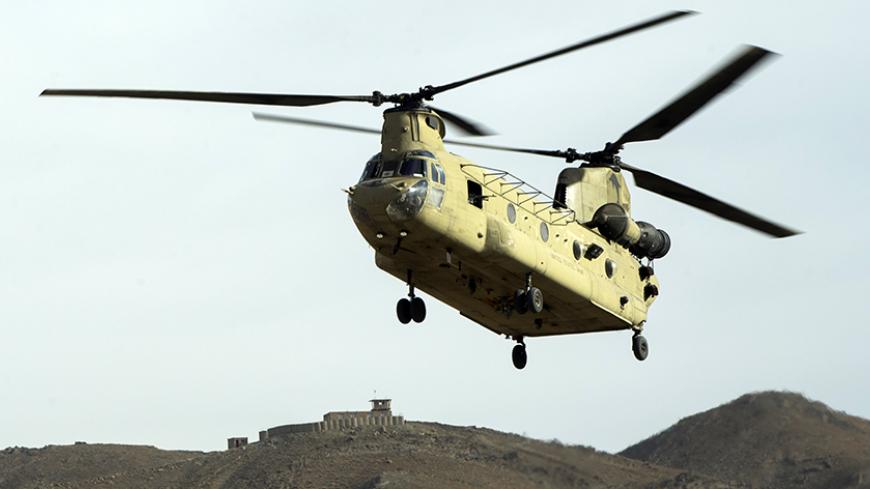 A CH-47 Chinook helicopter from the 82nd Combat Aviation Brigade lands to pick up US soldiers from the 3rd Cavalry Regiment in the Paktia province of Afghanistan, Dec. 21, 2014. Turkey aims to acquire five additional CH-47F helicopters from Boeing to complement its existing capabilities. - REUTERS/Lucas Jackson

The Executive Committee (EC) of the Defense Industry, the highest decision-making body on arms procurement in Turkey, held its first meeting of 2015 last week under the chairmanship of Prime Minister Ahmet Davutoglu. Ambitious and costly projects approved were trumpeted as further steps toward “new Turkey.”

In the old days, news of EC meetings did not really interest the man in the street. But in recent years the Justice and Development Party (AKP) government's frequent references to defense industry projects in its political discourse and boasting of grand successes achieved worthy of a global power in the making have made them newsworthy. Inauguration ceremonies for new projects that are public relations spectacles that the Turkish people enjoy are now a reality of that “new Turkey.”

This also explains why Davutoglu reserved most of his Jan. 13 parliamentary speech to the EC meeting. This is how he explained the EC decisions: “The defense industry is henceforth national and will remain national. It will be the basis of our national destiny. In old times, never mind Turkey even dreaming of making its own tanks and its own planes; we used plead for donations to buy the weapons other countries discarded. For tank modernization we needed Israel. Now we have a Turkey that won’t bow to others with its own national defense industry. This is the new Turkey.”

What was decided by the EC?

The first details of Turkish Fighter Experimental Project (TFX) were revealed after the EC meeting. The committee decided to proceed with the FX-1 model that was initiated by Turkey’s TUSAS and TAI companies for which Swedish company Saab provided the design at a cost of $20 million. FX-1 will replace Turkish air force’s aging F-16s and will be deployed with the F-35 fighters Turkey is thinking of purchasing. The meeting stressed that the FX prototype that was planned to fly on the 100th anniversary of Turkey’s independence in 2023 will be more expensive than similar planes, but was preferred because it will be made locally.

In Ankara corridors, it is said that President Recep Tayyip Erdogan sees this project as “Turkey’s prestige project.” But it has to be noted that the project is causing concerns in Turkey’s defense bureaucracy because of potential problems that it will face in its exports because of its high cost. There are serious questions whether this is an appropriate, profitable project for the country. Some sources say although the public is told that is a “100% national project” it is practically impossible move ahead with the project without the support of foreign defense industries during prototype development.

Another decision of the EC was to order four more of the controversial new generation F-35 Joint Strike Fighter in addition to two already ordered. The F-35 is produced by a consortium Turkey has joined.

The decision to mass produce the national infantry rifle (MPT-76) came about because 500,000 G-3 infantry rifles in the Turkish Armed Forces inventory have completed their useful life. The EC decided to replace the G-3 in phases with a $300 million project. In the first phase, state-owned Machinery and Chemicals Industry (MKE) will produce 35,000 7.62 mm MPT-76 rifles. It must, however, be noted that the MPT-76 rifle project that has been dragging on for three years is not actually a local design but a copy of the German HK 416 rifle. Also the decision of the National Defense Ministry to ignore Turkey’s private weapons manufacturing sector and award the tender directly to MKE was a subject of polemics.

The EC took some important decisions on the project begun in 2006 to meet the heavy helicopter needs of the Land Forces Command and Special Forces Command. Accordingly, Turkey will order five CH-47F Chinook helicopters from Boeing to increase its order of heavy helicopters to 11. Of the six helicopters procured with the first package, five are to be allotted to the army and one to special forces. The first order is going to cost Turkey $400 million. With the new order, the total cost will be close to $1 billion.

Also attracting attention was the decision to configure specifications of one of the additional five helicopters for VIP transport. This Boeing Chinook, labeled “Flying Fortress” by the news media, is expected to be allotted to the Presidential Palace. But since 2003 Turkey has already purchased three S-92 VIP helicopters for senior state officials. In addition to the helicopters, the VIP airplane fleet was also expanded with four Airbus and Gulfstream planes with an expenditure of $540 million.

The EC meeting was expected to come out with a final decision on the Ballistic Anti-Missile Defense System (T-Loramids) that was first awarded to China Precision Machinery Import-Export Corp. but which was later said not to be the final choice. Turkey announced it was still negotiating with Eurosam, a French-Italian partnership that was the runner-up to the Chinese company for this $4 billion project. NATO had reacted angrily to Turkey’s selection of China as the contractor.

After the EC meeting, Davutoglu said, “We decided to continue talks with China as well as with other companies for another six months, or let's say, until any of the companies comes up with an offer that will increase Turkey's production share in the missile systems to a maximum level, as well being favorable on matters related to costs and the timing of their delivery.”

Of course, Davutoglu’s words can be interpreted as a stalling move to spare any harsh criticism of the AKP government over this critical project in the lead-up to the general elections.

As a whole, ambitious defense projects decided at EC meeting appear to have pleased the Turkish military and Erdogan. But according to journalist Lale Kemal, who follows Turkey’s defense sector closely, given the recent 14% decline in value of the Turkish lira against the US dollar, these decisions also mean monumental financial burdens for Turkey. Kemal thinks that all these projects are overly ambitious under current conditions.

The real issue underlying the execution of these projects, which will cost about $10 billion, is the deficiency of transparency and lack of competition in the awarding the contracts, and generally keeping the public in the dark by hiding behind the pretext of need for secrecy. Amazingly, there is almost no debate whatever in civilian society about the suitability of the choices made and the cost-effectiveness of projects approved. As such, these ambitious projects help to expand the ambiguous aura about them.