A pro-Kurdistan Workers Party news agency has reported that two Turkish nationals arrested in Iraqi Kurdistan had reported to Turkish intelligence and planned to abduct or assassinate senior PKK figures. 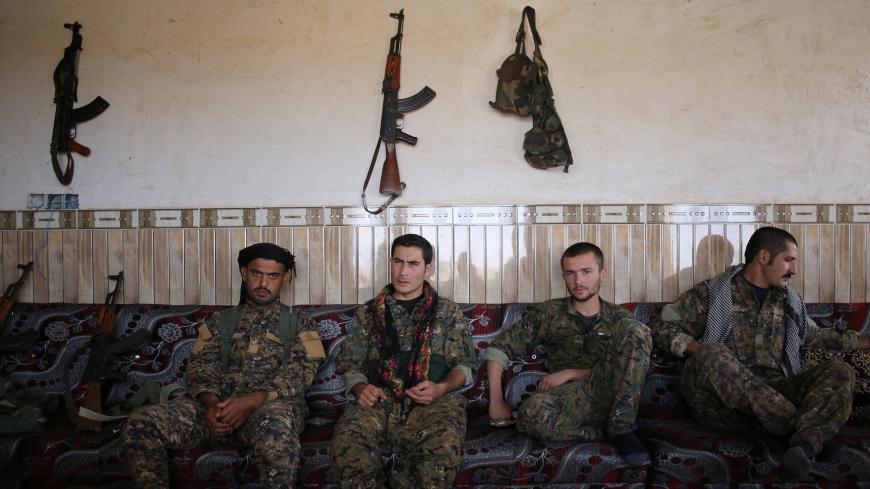 Members of the Sinjar Resistance Units, a militia affiliated with the Kurdistan Workers Party, sit with an Arab tribal fighter (L) in a house in the village of Umm al-Dhiban, Iraq, April 30, 2016. - REUTERS/Goran Tomasevic

While Turkey remains silent over claims that two Turkish nationals working for the national spy agency MIT are being held by Kurdish rebels, a news agency with access to the group known as the Kurdistan Workers Party (PKK) has published fresh allegations about the affair.

Firat News reported that the two men were in charge of running a network of spies in Iraqi Kurdistan to monitor the PKK’s activities. Turkish authorities have been pushing for their release without success, Firat claimed.

The PKK leadership is based in the Qandil Mountains on the Iran-Iraq border but maintains a presence in Makhmur and Sinjar. It also moves unhindered in the Sulaimaniyah region, which is controlled by the Patriotic Union of Kurdistan (PUK), the second most influential party in Iraqi Kurdistan.

According to the agency, the pair carried diplomatic passports and reported directly to the head of Turkish intelligence, Hakan Fidan. They supposedly had his blessing to either abduct or assassinate senior PKK figures. Firat News reported they were captured by the PKK together with several of their local informants on Aug. 3 in the Dukhan area of Sulaimaniyah. On Aug. 28, a senior PKK leader asserted that two Turkish intelligence officials who were plotting to kill senior PKK leaders were in PKK custody. Despite Turkey's silence on the news carried by the unabashedly pro-PKK outlet, the prevailing consensus is that the Turkish government would have denied the men were being held by now if the reports were false.

Should the claims prove to be true, the assassination plot would not be the first of its kind.

MIT has been linked to the 2013 murders in Paris of three Kurdish women, including Sakine Cansiz, a founding member of the PKK.

Omer Guney, a Turkish man who was the only suspect detained in connection to the killings, died last year of a brain tumor in Paris just days before his trial was supposed to start. Agence France-Presse spoke with a French judicial source, who said that the investigation had pointed to involvement by MIT members in the triple murder. Investigators were unclear on whether the MIT agents had acted "with the backing of their superiors” or "without the knowledge of the secret service in order to discredit or harm the peace process."

The murders coincided with the launch of the latest round of peace talks between the Turkish government and the PKK, prompting speculation that Turkish “deep state” operatives bent on sabotaging them had orchestrated the carnage in Paris.

Fidan played a central role in now collapsed talks, meeting numerous times with PKK leader Abdullah Ocalan at his island jail and with PKK commanders in Oslo. Prosecutors said to be loyal to Fethullah Gulen, the Muslim cleric who is accused of plotting last year’s failed coup, accused Fidan in 2012 of bogus connections to terrorists. Gulen, a die-hard Turkish nationalist, was bitterly opposed to any overtures toward the PKK.

The controversy has reinforced the view that Fidan, who is among Turkish President Recep Tayyip Erdogan’s most trusted confidants, was targeted for pushing for peace with the PKK, and therefore would have never sanctioned the Paris job. By the same reasoning, it seems unlikely that he would have ordered intelligence operatives to kill PKK leaders in Iraqi Kurdistan. But Cemil Bayik, the PKK’s top commander in the field, has repeatedly claimed that Fidan was in on just such a plot.

Iraqi Kurdish officials who spoke to Al-Monitor on condition of anonymity dismissed the idea that MIT had planned any murders. They confirmed, however, that a pair of Turkish nationals had been apprehended by the PKK on Aug. 5, saying that an unspecified number of Kurds on MIT’s payroll had infiltrated the guerrilla organization and been sent to Qandil. “The Turks were probably working for MIT,” one of the Iraqi Kurdish officials said.

Last week, Turkey booted out the PUK’s Ankara representative, Behroz Galali, apparently over the PUK’s failure to resolve the affair. His expulsion led to the unveiling of the story by Iraqi Kurdish media outlets a full three weeks after the alleged Turkish spies were reportedly nabbed.

by Murielle KASPRZAK and Joseph SCHMID | AFP | May 26, 2022
END_OF_DOCUMENT_TOKEN_TO_BE_REPLACED