Kurdish militants claim to have captured two Turkish intelligence officers planning to assassinate a senior Kurdistan Workers Party figure, though it's not clear what the group is demanding in exchange for their release. 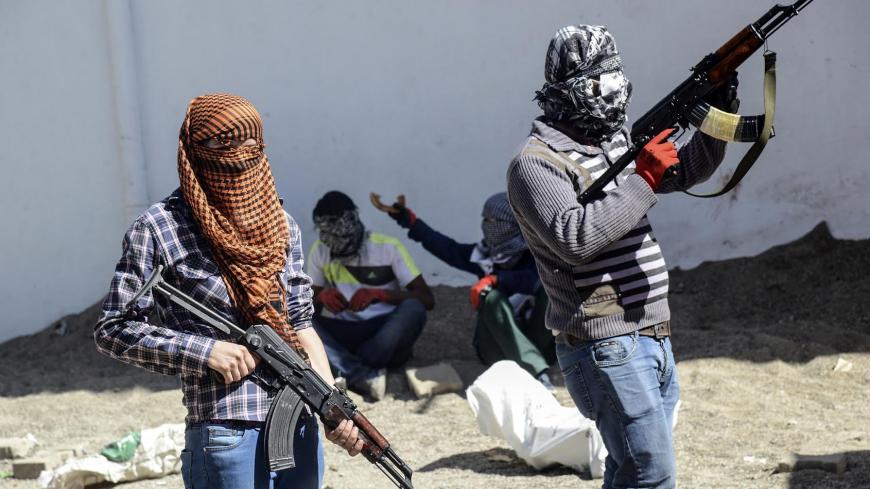 A Kurdish militant group claimed today that it has captured Turkish intelligence officers. Diyar Xerib, a Kurdish leader linked to the Kurdistan Workers Party (PKK), said the PKK had “arrested” two Turkish nationals working for Turkey’s national spy agency MIT, but had refrained from publicizing the incident so as not to create problems for the local government.

“No doubt the PKK can publish news about the arrests of the MIT officials who wanted to make the area a place to carry out their dirty operations, the biggest of which was to assassinate a prominent PKK official,” Xerib told the pro-PKK Roj news outlet.

News that the PKK had captured Turkish intelligence officials first surfaced last week. Accounts vary but according to several Iraqi Kurdish news organizations, the Turkish spies had traveled to Sulaimaniyah, the de facto administrative capital of the eponymous province in the eastern part of Iraqi Kurdistan.

The men were said to be planning to assassinate a senior PKK figure, most likely top field commander Cemil Bayik, and ended up ensnared themselves. Bayik occasionally travels to Sulaimaniyah for meetings as well as for medical treatment.

Eyewitnesses report spotting the burly guerrilla commander there in a grey business suit but without a tie.

The mountainous region bordering Iran is controlled by the Patriotic Union of Kurdistan (PUK). The PUK has cordial relations with the PKK. The Iraqi Kurdish President Massoud Barzani’s Kurdistan Democratic Party is closely allied to Turkey.

Xerib did not provide any details about where or when the alleged MIT agents were apprehended. He did, however, threaten to release photographs of the men and unveil their identities. It’s not clear what if anything the PKK is demanding in exchange for their release. The PKK has held Turkish citizens, including soldiers, in the past. The rebels usually release them unharmed amid a blaze of publicity calculated to showcase their strength.

The Turkish government remains silent on the matter, neither denying nor confirming that any Turkish officials have fallen into PKK hands. Fearing official reprisal, the Turkish media has largely followed suit. If the story of a botched assassination proves to be true, it will be a huge embarrassment for the Turkish government. The Aug. 23 expulsion order for the PUK’s long-time Ankara representative Behruz Galali suggests it may well be.

Iraqi Kurdish officials told Al-Monitor on condition that they not be identified by name that reports confirmed that two Turkish nationals had been seized by the PKK on Aug. 5 in the Dukhan area near Sulaimaniyah. One of the officials described the reports of the alleged plot to murder Bayik as "far fetched."

The Turks had traveled from Turkey to Erbil and were driven to the Sulaimaniyah area. The officials said Turkey had failed to inform the Kurdistan Regional Government (KRG) about their planned mission but had then sought its help to free the men. Turkey is accusing the PUK of leaking information about the MIT operatives to the PKK. The PUK denies any knowledge of the scheme.

Saadi Ahmad Pira, a veteran PUK official, told the Voice of America that Galali’s expulsion from Ankara followed “a failed operation.” He asserted that the PUK had received no prior notification from the Turkish authorities, saying only, “There was an act, an intelligence operation conducted by Turkey. It was not successful. Not only was it not successful, it even ended with damage inflicted on the Turks.” He declined to elaborate.

Pira noted, however, that Turkey’s Foreign Minister Mevlut Cavusoglu, who was in Erbil on Aug. 23, had raised the matter in a meeting with him and Deputy Prime Minister Qubad Talabani, whose ailing father Jalal remains notionally in charge of the fractious PUK.

There are unconfirmed reports that Turkish consular services in Sulaimaniyah have been suspended since Aug. 24. Al-Monitor was unable to reach Turkish officials for comment.

Some analysts scent a connection between Turkey’s actions and a planned referendum on Iraqi Kurdish independence. Turkey says it wants the KRG to cancel the vote planned for Sept. 25.

One of Turkey’s biggest objections to the referendum is that it will cover the disputed areas, notably the oil-rich province of Kirkuk, which the Iraqi Kurds and Baghdad both claim for their own. Kirkuk is home to a large ethnic Turkmen population with strong kinship ties to Turkey. Ankara has sought to mobilize the Turkmens to advance its own political agenda in Iraq with mixed results. The PUK currently controls much of Kirkuk, where PKK fighters also joined in the fight against advancing Islamic State militants in 2014.

Another theory making the rounds is that the the Turkish government may seek imprisoned PKK leader Abdullah Ocalan's help in bringing the MIT agents back to Turkey. The PKK leader has remained off limits ever since April 2015, when the latest round of peace talks between the government and the PKK collapsed.

Turkey has long sought to either capture or kill high value PKK targets and has asked the United States for help in locating them. Turkey is believed to have renewed the request during Secretary of Defense James Mattis’ visit to Ankara on Aug. 22. The idea was floated during the Barack Obama administration and is being mulled by the current one.

Few believe that eliminating the PKK leadership would have a lasting impact on the group, which has been fighting the Turkish army, NATO’s second largest, for the past 33 years.

Past efforts to dismember the PKK have ended in failure. The PKK did experience internal fissures after Turkey netted Ocalan in 1999 with American help. A group of dissenting rebels led by Ocalan’s brother Osman sought to seize control of the outfit but were forced out. Some believe that driving a wedge between it and its sister organization in Syria, the People’s Protection Units — the United States’ top partner in the campaign against IS — can weaken and ultimately unravel the PKK.