Rumor has it that the head of Turkish intelligence is planning a trip to Erbil, where he would face an uphill struggle to free Turkish operatives allegedly held there and perhaps discourage the upcoming referendum on independence. 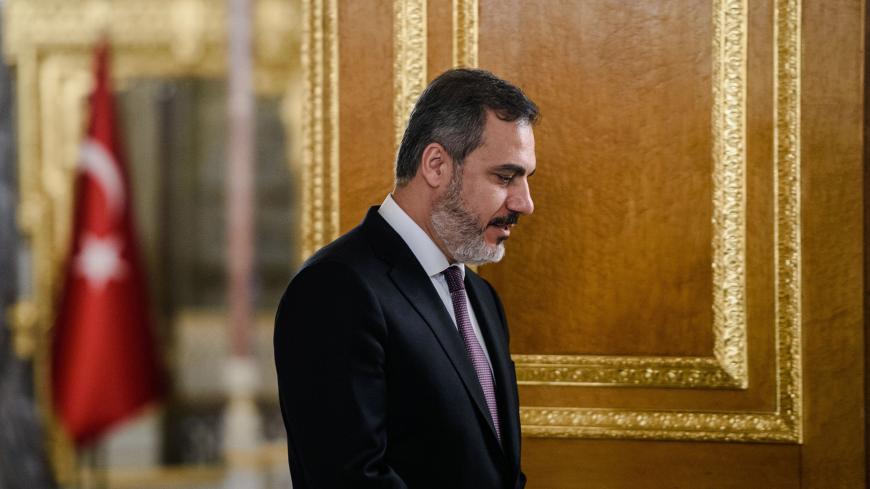 Turkey’s spy chief, Hakan Fidan, is planning to travel to the Iraqi Kurdish capital Erbil this week, part of a mission to push for the release of Turkish operatives who are being held by Kurdish militants and presumably also to seek to delay a referendum on Iraqi Kurdish independence, local officials speaking on strict condition of anonymity told Al-Monitor. They declined to elaborate, and a spokesman for Turkey's National Intelligence Organization (MIT) did not return Al-Monitor’s calls for comment.

If the reports are accurate, Fidan faces an uphill struggle on both counts. Officials from the Patriotic Union of Kurdistan (PUK) have assured Turkey that the two operatives, both Turkish nationals who were reportedly captured by rebels with the Kurdistan Workers Party (PKK), would be released this month.

Mustafa Karasu, a veteran PKK commander, claimed last week in a radio interview that his organization had not just two “high-ranking” Turkish intelligence agents in its custody, but 18 other Turkish officials as well. He offered no clues as to if and when they might be freed. Karasu earlier claimed that the Turkish nationals carried diplomatic passports and were responsible for running a network of spies keeping tabs on the PKK.

The PUK governs Sulaimaniyah province, where the sting operation, described in groundbreaking detail by Al-Monitor’s Fazel Hawramy, allegedly took place. The Turks were said to have traveled from Ankara and were nabbed as they were meeting with their contacts within the PKK.

The PUK has come under heavy fire from Ankara for its lax attitude toward the PKK. Bahroz Galali, the PUK’s veteran representative in Ankara, was sent packing on Aug. 23 over his failure to secure the operatives’ release. The Turkish government still has not commented on the affair.

The only person with the clout to arrange for the operatives’ freedom is the PKK's imprisoned leader Abdullah Ocalan. But he has remained incommunicado since April 2015, when the latest round of peace talks with the government collapsed. One of his main interlocutors was Fidan, who is also counted among Turkish President Recep Tayyip Erdogan’s most loyal lieutenants.

Barring the rare family member, Ocalan has not been permitted visitors since. It’s conceivable that Fidan has sought Ocalan’s intervention to rescue his men, but it's impossible to know.

The PKK is based in the Qandil Mountains straddling the Iraq-Iran border from whence it oversees its bloody campaign for self-rule inside Turkey. Turkey sporadically rains bombs on the area but to little effect. The government is believed to have revived plans to assassinate high value PKK targets such as Cemil Bayik, its top-ranking leader in the field.

An Iraqi Kurdish official speaking on condition of anonymity because of the sensitive nature of the subject speculated that the PKK would likely hold on to the Turkish intelligence officers as “insurance” against any further attacks against its headquarters in Qandil. The official said the rebels might also see them as a bargaining chip, discouraging Turkey from moving against its Syrian Kurdish allies, the People’s Protection Units, which Turkey labels “terrorists” as well.

Meanwhile, despite intensified pressure from the United States, Iran and Baghdad, Massoud Barzani, the president of Iraqi Kurdistan, remains adamant that the referendum on independence will take place on Sept. 25 as scheduled. Turkey has made rude noises about the referendum but has not used any of the levers at its disposal, most crucially the oil spigot and the Habur border crossing, to stop it.

In a critical boost, the PUK agreed to reactivate the parliament on Sept. 14 to pass a law approving the referendum. The body has remained frozen since 2015 because of the opposition Gorran movement's objections to the extension of Barzani’s presidency, which expired that year. Gorran, whose members were barred from Erbil, has yet to decide whether it will participate in the session. Gorran officials are set to meet with the Kurdistan Democratic Party and the PUK tomorrow for further discussion.