Turkey abruptly shut down the office of the Patriotic Union of Kurdistan (PUK), which had been in Ankara since the 1990s, following the PKK's reported abduction of Turkish intelligence agents in an area under PUK control. 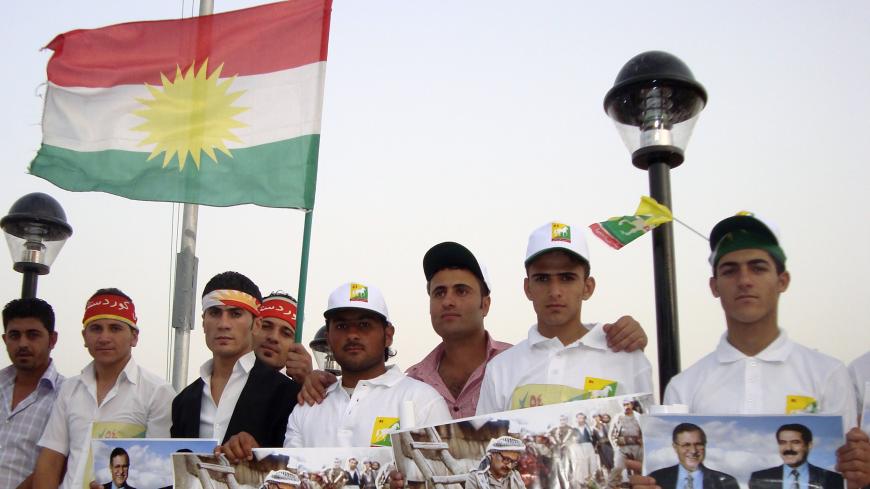 Supporters of the Patriotic Union of Kurdistan (PUK) hold and wave political posters and flags in Sulaimaniyah, 260 kilometers (160 miles) northeast of Baghdad, July 9, 2009. The PUK's office in Ankara was recently shut down after Turkish intelligence agents reportedly were captured by the Kurdistan Workers Party in an area under PUK control. - REUTERS/Tim Cokcs

DIYARBAKIR, Turkey — Turkish Foreign Minister Mevlut Cavusoglu last week visited the Kurdistan region of Iraq. His agenda with Massoud Barzani, the president of the Kurdistan Regional Government (KRG), focused on the independence referendum the Kurdish administration is preparing for.

Among the Kurdish officials the Turkish minister met was Sadi Pire, a member of the political bureau of the Patriotic Union of Kurdistan (PUK), which is led by former Iraqi President Jalal Talabani. But just as Cavusoglu was on his way back to the Turkish capital, the PUK’s Ankara office was shut down and people working there were asked to leave Turkey. The abrupt closure of the PUK office, which had been operating in Ankara since the 1990s, came as a surprise because nobody could explain it. Why did Turkey take such a radical step when relations with the Kurdish administration were at their best? Ankara didn’t say anything, but information obtained through leaks in Ankara indicated the decision was taken at the request of the Foreign Ministry and had to do with the seizure of Turkish intelligence agents by the Kurdistan Workers Party (PKK), a Turkish guerrilla group.

Among those asked to leave Turkey within 24 hours was Behroz Gelali, the Ankara representative of the PUK. Actually, while the Ankara government and the Turkish news media kept mum, the news broke out with a statement Gelali made after he arrived in Sulaimaniyah in Iraqi Kurdistan. In his press statement, Gelali widely referred to the PKK presence around Sulaimaniyah, which is controlled by the PUK, as a primary cause of tensions between Turkey and the PUK. Gelali said, “We did good work the region. We lived through many political crises in 17 years and never reached this level of tension. Last week there was a crisis in Sulaimaniyah that had nothing to do with the PUK. It was mostly Turkey’s mistake. Their Foreign Ministry informed us of their displeasure over an incident in the PUK region. That unfortunately went so far as closing the PUK office in Ankara. Such incidents happen in politics and diplomacy. We remember how the US Army went after Turkish soldiers in 2003 in northern Iraq. Mr. Talabani had mediated for peaceful resolution of the problem between the Turkish and American militaries. States usually solve such problems through diplomacy. But this time Turkey followed a rigid course for solution and told us to keep the office closed until the problem is resolved.”

Gelali said this is the first time the PUK has had such a serious crisis with Turkey and warned the PKK to be aware of the sensitivity of the area and behave accordingly.

So what made Turkey so angry? Turkey has not yet said a word about the incident, presumably because unofficial efforts are ongoing to conclude it. The allegation is that the PKK kidnapped two agents of Turkey’s National Intelligence Service (MIT) in an area controlled by the PUK.

Security sources of the Kurdish government who did not want to be identified confirmed the reports to Al-Monitor. They said the incident happened near the town of Dokan. The MIT agents whose real mission in the area is not yet known were kidnapped with the help of two PUK members, hence the crisis, the sources said. They said that Turkey’s searches in the area were futile and that the PKK did not respond to the KRG’s demands for meetings.

The first pertinent clarification came from Pire. He told regional NRT TV that the MIT had planned an operation against the PKK but failed. Pire said, “An operational team coming from Turkey, including some senior officials, was apprehended by the PKK while preparing for an assassination against PKK leaders. Ankara held the PUK responsible for the failure of their operation. This is why they reacted by closing our office in Ankara. We met with Turkey’s foreign minister to solve the problem and our contacts are continuing."

Pire’s statement was followed by one from the PKK. Diyar Xerip, a senior official in the Kurdish umbrella organization Kurdistan Communities Union (KCK), claimed some MIT personnel had been captured. Xerip said the MIT agents were in the area to launch an operation against Kurdish leaders and said the KCK is ready to show the MIT agents to journalists.

Turkish Foreign Ministry sources said Gelali was at the root of the problem. They said the Foreign Ministry was disturbed by what it saw as Gelali’s attitude of being supportive of the PKK. The sources said the PUK had been warned about this earlier, and that when nothing changed, the decision was taken to shut down the Ankara office.

The same ministry sources, however, remained mum about the claims that MIT personnel had been abducted. Ankara’s total silence about the incident reinforces the belief that the abduction happened. The PKK’s statement of taking credit for the incident is not, however, enough because it was not accompanied by the usual visual material related to such claims. If the claims are true, then this would be the first time that the PKK has abducted MIT personnel. This would have political repercussions in the region. If true, what course will Turkey follow to retrieve its personnel from the PKK? Is it possible that this might be a reason that Turkey last week issued a state of emergency decree authorizing the state to exchange prisoners with foreign powers (whose definition remained vague)?