Mad love, amnesia or fear? How Erdogan pulls it off

President Recep Tayyip Erdogan’s political fortunes have not suffered from his contradictions, questionable denials and attacks on opponents. 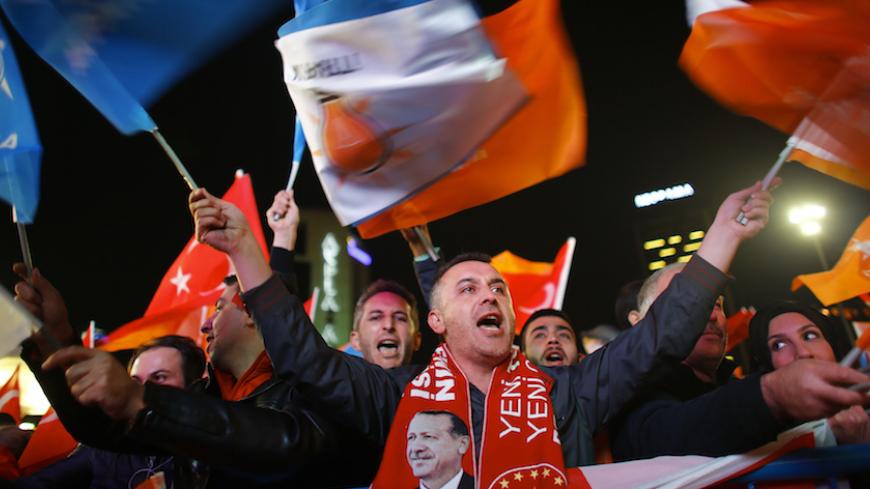 A distinctive trait that President Recep Tayyip Erdogan has displayed over the years is the ease with which he switches between diametrically opposed positions on the same issue. When the Justice and Development Party (AKP) was created in 2001, he disavowed his Islamist roots only to later declare with pride that he had never changed. In another instance, democracy for him was at first “a means,” but then it became “an end.” Such contradictions were initially seen as part of his “political style,” but during his 13 years in power, the AKP has had such startling changes of heart that many now wonder whether Turkish society is plagued by some sort of collective amnesia on which Erdogan and his party prey.

The most striking examples of this tendency emerged during the mass, anti-government protests over Gezi Park in summer 2013. In a bid to discredit and vilify the protesters, Erdogan, then prime minister, and the pro-government media made two inflammatory claims that they repeated for months. First, they said the protesters had desecrated an ancient mosque by boozing and kissing inside the building. According to the second claim, at Istanbul’s Kabatas pier​, dozens of male protesters, half-naked and wearing leather gloves, assaulted a young mother with her baby because she was wearing an Islamic headscarf and then urinated on her. The claims included assertions that video of both incidents would be released “soon.” Three years on, the public is still waiting for the video evidence. Meanwhile, security camera footage from Kabatas revealed that the alleged victim was never attacked. Neither Erdogan nor the pro-government media has felt the need to correct themselves or apologize.

Months after the Gezi protests, the government was rocked by corruption allegations that led four ministers to resign. The corruption probes revealed in December 2013 shattered the AKP’s 11-year alliance with the movement headed by Fethullah Gulen, as the police and prosecutors leading the investigation were accused by the AKP and its backers of being Gulenist plotters seeking to unseat the party. Soon after, those involved in the probe were relieved of their jobs. A few years earlier, these same police and prosecutors had been the much-lauded architects of a sprawling case against the purported terrorist Ergenekon, a group that allegedly conspired to plunge Turkey into chaos by paving the way for a military coup against the AKP.

So the corruption probes suddenly woke up Erdogan! The Gulen community was now branded the “Fethullahist terrorist organization” (FTO), although only months earlier Erdogan had spoken of how he yearned for Gulen to return home from the United States. Erdogan grumbled that he had left no wish of the Gulenists unanswered, called them “ingrates” and claimed he had been “deceived.” In the ensuing onslaught, dozens of alleged FTO members — prosecutors, policemen, academics and bureaucrats — ended up in Silivri prison, near Istanbul.

Since 2007, Silivri has hosted dozens of soldiers, journalists and intellectuals accused of being Ergenekon members. Erdogan and his associates backed the arrests and encouraged narratives vilifying the army, claiming the “military tutelage” was being dismantled. After the corruption probes, however, Turkey's soldiers were no longer putschists, but “brothers,” “sons” and “co-workers” to Erdogan, and all the blame for the yearslong trials was put on the FTO.

In the freshest example of such contradictory behavior, this month Erdogan began denying the existence of the agreement that representatives of the government and the Peoples’ Democratic Party had reached Feb. 28, 2015, as part of efforts to resolve the Kurdish issue. In 2012, Erdogan admitted that he had personally instructed Turkey’s intelligence chief to initiate secret talks with Kurdish rebel leaders, although he had previously challenged the opposition to prove its claim that such talks were underway or face being labeled “dishonorable” liars.

So, how can Erdogan and the AKP be thriving politically given such glaring contradictions and discrepancies on vital issues? Binnaz Toprak, a political scientist known for her social research and a former opposition lawmaker, outlined three main reasons.

First, she told Al-Monitor, “This country’s people have a very short memory, because every morning they wake up to such staggering news that they forget previous [episodes]. This is something unseen in established democracies.”

Second, Toprak pointed to the extraordinary loyalty of Erdogan's supporters. “Those who love Erdogan love him madly. That’s why they didn’t bat an eye over the [corruption] probes despite all the evidence and audiotapes and the safe boxes and dollars [discovered in suspects’ homes],” she said. “In this case, it’s not forgetting, but keeping silent. Female supporters treat Erdogan like a pop star. You can’t explain this only through sociology. Erdogan provided a sense of being [true] citizens to all those people ostracized by the republic and those who felt like underdogs for wearing the headscarf. That’s how he earned their fanatical loyalty. Counting on this, he came to believe that they will support him whatever he says.”

The third factor, according to Toprak, stems from the intense polarization gripping Turkey. “In polarized environments, people cling tightly to their poles, hate ‘the others’ and keep silent on daily problems,” she said. “At the time of the [corruption] probes, I talked to people in the streets. To those who said they would still vote for the AKP, I brought up their religiosity. They said 'Never mind that. Who isn't corrupt?'”

The journalist Muyesser Yildiz, who spent 15 months behind bars as an Ergenekon suspect, believes there is more to the issue. She spoke to Al-Monitor days after the High Court of Appeals on April 21 overturned all the convictions in the Ergenekon trial, effectively debunking the case in its entirety.

“Gross legal violations were committed. The courts functioned like a 21st-century inquisition. Now, they can’t wash their hands of it simply by saying they were deceived. If you are so easily deceived, how do you run the country?” Yildiz said. “The memory of a society can’t vanish, of course. The answer lies in this logic: ‘We’ve intimidated society to a sufficient extent, and now there is no one left to speak up.’ And when you also nourish despair along with fear, you can comfortably say all the things you like.”

The pro-government media played a crucial role in the Ergenekon trials, spreading disinformation and mercilessly maligning the defendants. A lieutenant colonel, Ali Tatar, committed suicide out of dignity, and after that, a pro-government columnist wrote, “Where are you going without answering [for your crimes]?” The same media attacked and bullied colleagues and jurists who exposed the legal breaches and the fabricated evidence.

“Being played for a sucker is more offensive to me than being branded a terrorist,” Yildiz said. “Both Erdogan … and the media said we were not journalists but terrorists. We’ll never forget those headlines.”

“The Appeals Court has now made its decision. It turns out there was no Ergenekon. We are still here, but what about the others?” Yildiz asked, citing Tatar and other defendants who died in prison or while on trial. “Put aside what we went through, what about the rights of the deceased?”

Yildiz vowed to pursue accountability for those who played a part in the “police-judiciary-media triangle the state used to frame its citizens.” The debate on how short Turkey's collective memory is could go on, but one thing is for certain: The victims of the Ergenekon case, including the deceased and their families, expect a convincing apology from the state, the government and the media.

by Murielle KASPRZAK and Joseph SCHMID | AFP | May 26, 2022
END_OF_DOCUMENT_TOKEN_TO_BE_REPLACED