A growing group of feminist university students in Turkey is taking direct and aggressive action to confront men accused of harassment and sexual assault. 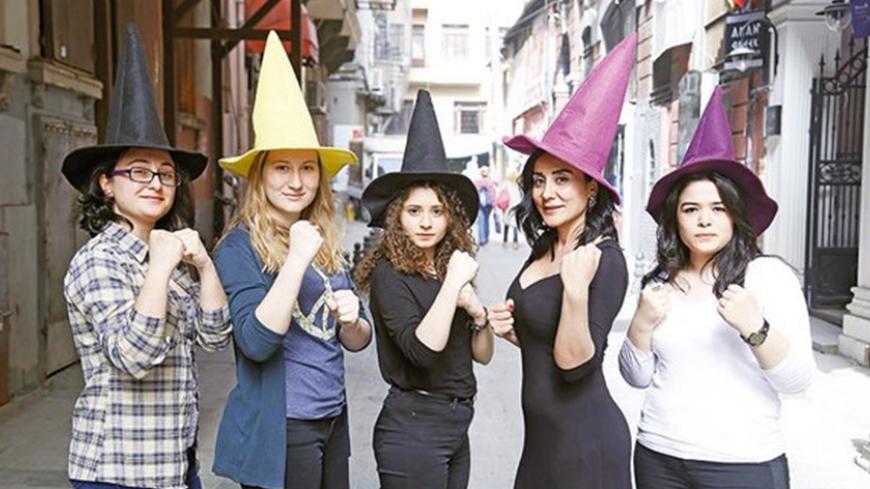 Members of the Ankara University Faculty of Language, History, and Geography stand in support of the Campus Witches in Ankara, Turkey, April 13, 2016. - Polat Torumtay

In late March, an unusual scene unfolded at Ankara University’s Faculty of Languages, History and Geography. A male student sitting with friends in an outdoor canteen was ambushed by a group of agitated girls. In a matter of seconds, he found himself under a flurry of punches and kicks as his company fled and a young woman shouted that he was being punished for harassing and sexually assaulting his ex-girlfriend. Security guards came to the student’s rescue, leading him away amid jeers and slogans of female solidarity. The incident, filmed on a cell phone, was posted online and immediately went viral.

This was the Turkish public's introduction to the "Campus Witches," a network of female university students who urge women to stand up against male violence and sexual harassment and often take matters in their own hands. Their slogan is “Never rely on a prince! When you need a miracle, pin your hopes on a witch.”

Born three years ago, the Campus Witches are currently organized in 20 universities across the country. “We won’t stop until we shatter male dominance to pieces,” they pledge. The reason for their rage is not hard to guess — violence against women has dramatically risen in Turkey in recent years, with many charging that government policies embolden the perpetrators.

In the 2015 Global Gender Gap Index, Turkey ranked 130th among 145 countries. Nearly 42% of Turkish women have suffered physical or sexual violence at least once in their lives.

In a newspaper interview, Campus Witches co-founder Meral Cinar painted a gloomy picture even for young urban women, describing how the group formed in 2013. “I was one of five female students in an engineering class with 80 males. The professors would address the males as they lectured. Then, there would be off-color jokes and obscenities," she said.

Cinar added, "We were facing harassment in the dorms as well. The security guards would draw up rankings or top 10 lists of the prettiest girls according to room number. At Ege University [in Izmir], the lane to the subway station was unlit, and all the women passing through there would be harassed. Mersin University has the same problem. Two female students were murdered [in unlit areas]. All those reasons led us to take action to try to create an atmosphere where women can express themselves freely on campus.”

Lawmaker Gaye Usluer, who represents the main opposition Republican People’s Party on the parliament’s education commission, takes a broader perspective and blames the ruling Justice and Development Party (AKP). “In the 14 years of AKP rule, they’ve created such a society that today there are even paid teams targeting women with verbal abuse on social media,” she told Al-Monitor. “They have no tolerance for any views but theirs. They pursue shameful policies to make women toe the line. The aim is to bully, intimidate and shut women up. The solidarity of the university girls is a result of the indignation that all this has provoked.”

And what about the Campus Witches countering violence with violence? Usluer believes they should rethink their methods. “In the face of inhumane behavior, they project an image like ‘We are not afraid, we are here and strong together,’ which is good. [But] they have to say, ‘We are not using the language you do.’”

Juliana Gozen, another co-founder, said the Campus Witches are committed “to self-defense and not some lynching culture,” adding they provide free training in Wen-Do, a form of self-defense developed specially for women. Cinar added, “We are learning self-defense to avoid being murdered or raped by a stranger in the street.”

The Campus Witches use Facebook to communicate, organizing quickly when their help is needed. The filmed beating of the young man in Ankara was not an isolated incident. The Campus Witches have also shown up in other universities in the capital as well as in Istanbul, Izmir, Mersin and Antalya.

In November, they landed in a tight spot when a tragedy was barely averted. Campus Witches at Akdeniz University’s Fine Arts Faculty in Antalya were called in for help by a female student, who claimed harassment by a classmate. About 30 women stormed the class, but the accused was not there. They confronted him later in the canteen. The young man, who denied the accusations, was so distraught that he attempted suicide outside the faculty building, leaving a note that read, “I’m not a harasser. All you who besmirched me, here you go, I don’t want to live.” The student stabbed himself four times in the abdomen but was rescued by emergency services.

Despite the controversy, the Campus Witches are determined to soldier on. Their actions are not limited to confronting men and extend to various realms in which they feel women are humiliated. At the Ege University campus, for instance, they stormed a booth selling wax strips, a protest that earned them mockery as “hairy women” on social media.

Cinar, however, said the raid was not about depilation. “We don’t care about the ‘hairy women’ comments. Our reaction was not to the company, but to the way the product was presented. They had a mockup of [model] Adriana Lima at the booth, so we objected to being told we should look like Adriana Lima,” she said. “Beyond that, we, too, put on makeup and remove hair. But if a woman doesn’t want to wax, she’s free not to do so. We want this to be understood. Women even lose their lives because of this imposition of beauty [standards]. Just how many women died of anorexia because of [body image] propaganda?”

In late February, Istanbul’s Bogazici University canceled a planned Campus Witches conference, a move the group blamed on “the climate of fear created by the misogynous AKP.” In a written statement, the Campus Witches pledged, “We, the granddaughters of the witches burned … by the same empires of fear many centuries ago will continue our witchcraft with stubbornness and audacity despite all obstacles and pressure.”