The crash in the Syrian pound’s value against foreign currencies has resulted in higher food prices and increased demand for other currencies. 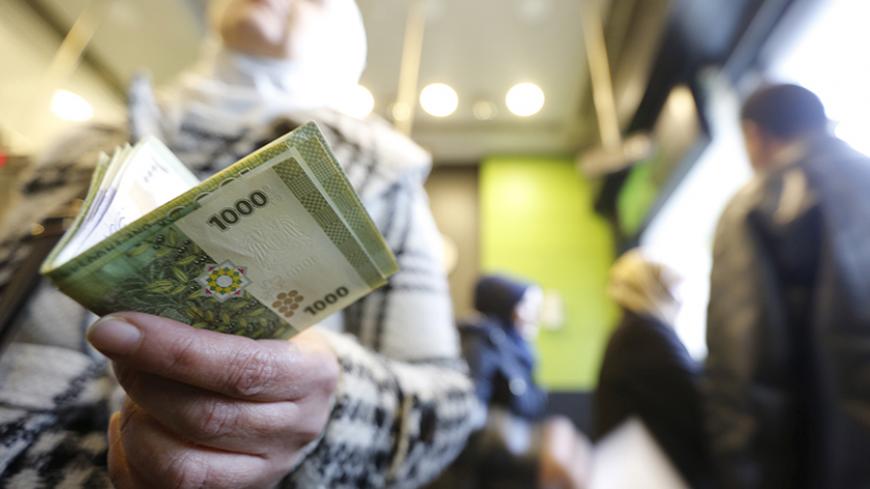 A woman holds Syrian pounds inside an exchange shop in Damascus, March 17, 2016.

ALEPPO, Syria — An unprecedented plummet in the Syrian pound’s value against foreign currencies is contributing to skyrocketing food prices and compounding Syrians' already-dire economic situation as the war here enters its fifth year.

The pound's exchange rate against the US dollar exceeded 500 in early April. Markets in the Syrian opposition-controlled areas in Aleppo have been plagued with a semi-recession due to the rising prices of food and other commodities, the declining local currency and weak purchasing power. This comes amid a lack of job opportunities and low revenues.

Abu Muhammad is the provider for his seven-member family. Al-Monitor met him in a popular market in the opposition-controlled area in Aleppo city.

“I came here to buy some goods for the house," he said. "I have 2,500 Syrian pounds [$5]. Previously, I could buy enough food for two weeks with this amount. Today, with the high prices, the amount is enough to buy food for four days. The prices are skyrocketing and there are few job opportunities because of the war. Should there be any jobs available, the salaries are very low, while prices are on the rise in the market. We only buy necessities.”

As their currency's value sinks lower day after day, Syrians have been exchanging pounds for foreign currencies through exchange offices. This is true particularly since the Central Bank in Damascus has failed to deliver on its promise of pumping US dollars into the market. This comes on top of the widening gap between the Syrian pound exchange rate in the banks and on the black market, which can range from 10 to 15 pounds per dollar.

Abdel Kareem Ahmad, owner of a cash store in the Qazi Askar neighborhood, confirmed to Al-Monitor that in recent months the Syrian pound's value has fallen significantly. "In early March, 400 Syrian pounds were equal to $1. After March 15, the Syrian pound started to crumble in an unprecedented manner as a result of the Russian troop withdrawal from Syria, which further raised doubts about an imminent end to the war in Syria. The central bank also stopped pumping dollars into the market, causing 500 Syrian pounds to be equal to $1."

He also noted the flock of affluent citizens and merchants exchanging Syrian pounds for foreign currencies, particularly US dollars or Turkish lira, fearing the pound could collapse further.

“No one wants to buy Syrian pounds, and if they had to the amount would be very small. There is no longer trust in the local currency, especially now," he added.

The country’s trade deficit of $3.5 billion, the almost complete lack of imports and exports, and the Islamic State's (IS) control over most of the oil fields have created a dilemma for the Central Bank regarding the pound devaluation problem, given the constant need to pump hard currencies into the market. However, in light of war-related consumption and the trade deficit, the Central Bank has failed to meet that need.

“Under normal circumstances in any country, the economic situation depends on the trade balance and stability, as well as the revenues from agriculture, trade, tourism, taxes and customs, which achieve the bulk of the trade balance," said Mohammed Bakour, an economist living in the opposition-controlled Saif al-Dawla neighborhood in Aleppo. "However, with the outbreak of the Syrian revolution, most revenue sources were halted while disbursements increased, which was the cost of the ongoing war, in the regime's view. It is only normal for the local currency to collapse gradually at that point. However, given the support provided to the regime by Iran, Russia and Iraq, among other allies, there had been some sort of balance in the Syrian pound price up to a certain stage.”

The changing political and military situations in the country have also contributed to the currency's collapse, he noted, especially "the displacement and migration of millions of Syrians, who stopped dealing with Syrian pounds.”

On solutions that can be adopted now, Bakour said, “We, the people of the liberated areas ... suggested dealing with hard currencies such as the US dollar or the Turkish lira in major transactions, limiting the Syrian pound to minor ones by canceling bills of 500 Syrian pounds, while keeping the smaller notes, as they have little effect and are not widely traded.”

On the possibility of a recovery for the Syrian pound, in light of the regime forces’ advancements on the ground, Bakour said, “The issue is not related to the recent victories by the regime forces in several parts of Syria. The problem is that these victories are accompanied by the population's displacement from those parts, which has disrupted daily life.

"Moreover, factors necessary for an economic revival are not available in areas that the regime seized recently. The natural resources are under IS control, the land crossings are under Syrian armed opposition control, and Aleppo, which is of major importance for the Syrian economy, is becoming empty of the majority of its people, including traders and industrialists, whose factories were transferred to Turkey. The economic life will not be recovered unless the war ends."