New Syrian banknote may be more than meets the eye

Syria has issued a new 2,000-pound banknote sporting the face of President Bashar al-Assad; not surprisingly, the opposition refuses to use it. 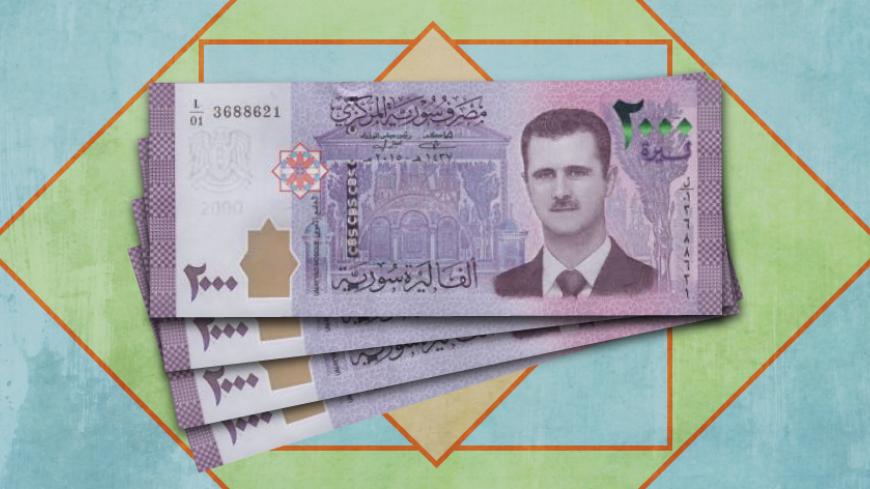 ALEPPO, Syria — The Central Bank of Syria is circulating new 2,000-pound banknotes in all cities under the regime’s control, topping the previously largest denomination of 1,000 pounds and helping to shrink the wads of cash residents have been forced to carry because of the currency's devaluation since the ongoing civil war began in 2011.

Central Bank Governor Duraid Durgham said in a July 2 press conference in Damascus, “Given the worn nature of the bills currently in circulation, the central bank saw that it was the appropriate time to release the 2,000-pound banknote on the market. It is highly secure because it is not easily forged, and it is distinguishable.”

The 2,000-pound note is thicker than other banknotes and is characterized by embossed writing. It also features the face of President Bashar al-Assad on the front in his first appearance on a note during his 17-year rule. An image of the parliament building sits in the background.

The note was actually printed years ago, along with several other denominations, but the government decided not to circulate any of them at the time because of the civil war and volatile exchange rates. The note was worth about $4 when it launched earlier this month and remains at about the same value today.

Institutions affiliated with the Syrian opposition refuse to use the new note. The Free Economists Community for Development and Modernism, a nongovernmental organization close to the opposition, issued a statement July 6 in which it warned of the risks of using the notes in opposition-controlled areas. The group, and some experts, claim the regime is attempting to withdraw foreign banknotes, like the Turkish lira and the US dollar, from the rebel zones and use them for a war fund.

Freelance economic expert Muhammad Bakour in Idlib told Al-Monitor, “The regime released the 2,000-pound banknote to withdraw the foreign banknotes from the liberated areas. The regime is in desperate need of hard currency to cover part of its accrued financial burdens as a result of the war. But issuing this new banknote will cause more harm, as it will lead to a drop in the value of goods in general.”

Syrians in opposition areas have been using the US dollar and Turkish lira since the pound collapsed in 2012. Some people still use the pound, however, for transactions in local markets, as there is no substitute for the local currency.

Bakour further stated, “There will be an imminent drop in the pound's value compared with other currencies, due to the currency surplus on the market, hence the 2,000-pound banknote. Exchange rates might be quite volatile, affecting economics and trade in the country, which is already undergoing a recession due to the war and the migration of capital and labor to neighboring and European countries.”

The Syrian Interim Government, affiliated with the National Coalition for Revolutionary and Opposition Forces, also issued a statement July 7 forbidding trade using the new banknote. It said the prohibition is aimed at protecting the public interest and warned that violators will be referred to judicial authorities. The interim government did not specify what mechanisms would be used to prevent the banknote's circulation or implement any sanctions.

Neighborhood councils in areas under the armed opposition's control are blocking the note's circulation. The local council of the city of Achterin, in Aleppo province, is threatening one year in jail for anyone in possession of the 2,000-pound note.

Civilians in opposition-controlled areas are divided on how to deal with the new note. Abdullah Halabi, from Azaz in the northern Aleppo countryside, told Al-Monitor, “We should not circulate the new banknote. We are paying for the bullets and missiles that are killing us and our children and destroying our houses. We need to boycott not just the new Syrian banknote but all other banknotes and search for a currency that is traded in liberated areas. We need to be firm, because in the end, we do not want to pay for our death out of our own pockets.”

Ahmad al-Jamou, who was displaced from Aleppo and is now living in Idlib, had a different opinion. “I do not see a problem with using the new banknote,” he told Al-Monitor. “Otherwise, we would need an alternative, which does not exist at the moment. Two years ago, the Turkish currency was on the table instead of the Syrian pound, but that didn't work. At the end of the day, we have to use the currency the Syrian regime proposes, whether we like it or not.”

The Syrian Committee for Replacing the Currency in Opposition-Held Areas, an independent group, had proposed a project in summer 2015 to officially replace the pound with the Turkish lira. It failed, however, because people refused to switch to the Turkish currency.

Syria's economic situation has been dire for years because of the war and the migration of capital and labor to neighboring and European countries. The regime has lost many of the resources that once fueled the economy, such as oil wells, some of which are now under the control of the Islamic State (IS), especially in Deir ez-Zor. The budget deficit reached 741 billion Syrian pounds ($1.379 billion) in 2016, said Hussein Hassoun, head of the Budget and Accounts Committee in the Syrian parliament, in a press statement last November.

The new 2,000-pound banknote is a double-edged sword for the Syrian regime. It will either increase the value of the pound against the dollar if the worn-out 50- and 100-pound notes are withdrawn from circulation, or it will worsen the pound's collapse if it is merely added to the existing currency supply, especially if opposition-held areas do not use it.