The Syrian opposition forces in rebel-held northern areas hope a change in currency will put pressure on Bashar al-Assad’s regime on the economic level. 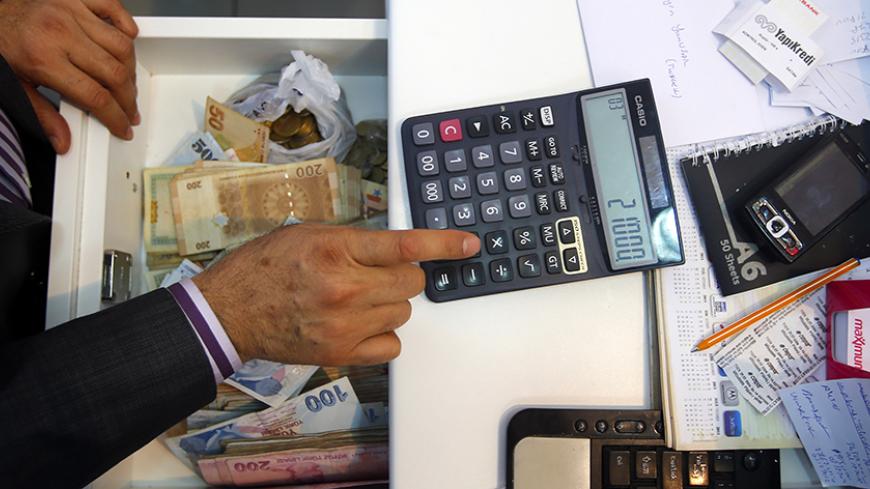 A money changer calculates the exchange rate of Turkish lira to Syrian pound at his office in the southern Turkish town of Reyhanli, Nov. 29, 2012. - REUTERS/Laszlo Balogh

ALEPPO, Syria — The Syrian opposition forces and institutions in the north are investigating whether the Turkish lira could substitute the Syrian pound, which has been drastically dropping in value since the start of the war in early 2011. The Syrian pound is still the main currency in the opposition-controlled areas, despite it having been three years since the Bashar al-Assad regime lost control of these areas.

In the eastern part of the country that is under the control of the opposition in Aleppo, one rarely sees products priced in foreign currencies. Food items such as bread and vegetables as well as fuel and clothing are priced in Syrian pounds; electronic devices such as imported mobile phones and computers are priced in US dollars.

At the end of each day, traders convert their money from the Syrian pound to foreign currencies in order not to lose out. Alaa, a seller of fuel in Bab al-Nairab, told Al-Monitor, “I don’t keep large sums of Syrian pounds. [The Syrian pound] is volatile and unstable.”

The Syrian pound has been witnessing sudden price fluctuations against foreign currencies, in light of the rapidly changing political and military events. Before the protests in March 2011 that demanded the departure of Assad, $1 was worth 46 Syrian pounds. But according to the Central Bank of Syria, $1 was worth 240 Syrian pounds on July 9. The exchange rate of the dollar on the black market in Aleppo is currently around 298 Syrian pounds.

The Committee for Replacing the Currency is now working in opposition-controlled areas in the north — Aleppo, Idlib, Hama and Latakia — to realize the replacement of the Syrian pound with the Turkish lira in the daily dealings of the population.

On July 9, Al-Monitor attended an economic seminar held by the Committee for Replacing the Currency in Aleppo. According to the seminar organizers, the committee is a civil initiative sponsored by the Association of Syrian Economists and is not affiliated with any official or political party related to the opposition.

Starting Aug. 1, the committee will be taking practical steps to gradually move Syrians to use the Turkish lira in collaboration with opposition institutions, such as the Local Council of Aleppo City, the Sharia Court, the Executive Office of the Free Lawyers of Aleppo and the Union of Media Professionals.

Essential items such as bread and fuel will be priced in Turkish lira under the supervision of an oversight committee. The salaries of the employees in opposition institutions will be paid in Turkish lira, and traders and manufacturers will be encouraged to price their goods in Turkish lira.

On the sidelines of the seminar, Al-Monitor met with Ammar Saqar, the committee’s official who is responsible for communication with the military factions. He said, “So far, most of the opposition military factions have agreed to the plan. This will be formally announced later. We are waiting for [some factions] to finish studying the plan.”

Saqar told Al-Monitor when asked whether using Syrian pounds will be banned in opposition areas in northern Syria, “The project is introduced in stages and currently we will not compel the citizens [to cooperate]. But [they should switch currency] voluntarily to serve the public interest and to fight the regime economically. When we get to an advanced stage, we may [compel the citizens to stop using] the Syrian pound if that does not harm the citizens.”

In addition to placing economic pressure on the regime, the Association of Syrian Economists believes that replacing the Syrian pound for the Turkish lira will achieve positive results on the economy in the opposition-controlled areas. The most prominent of those results would be reducing and stabilizing commodity prices and encouraging commercial and industrial investment, which will be helped by the market’s stability.

In this context, Anas al-Halabi, a member of the association, told Al-Monitor, “If we switch to a stable currency, commodity prices will drop in our areas because traders are now increasing prices by a certain margin to ensure no losses in the event the Syrian pound drops. Once we transition to a stable currency, this margin will disappear.”

Halabi said that this will not have a major impact because most goods being sold in the north of Syria are imported from Turkey. He said the Turkish lira was chosen as an alternative to the Syrian pound because “Turkey is a neighbor of Syria, and this makes the Turkish currency plentiful. In addition, it is easy to secure the metal currency pieces [cents], which are necessary for daily transactions. For instance, a kilogram [2.2 pounds] of tomatoes is 50 Syrian pounds, which is equivalent to 50 Turkish cents, or $0.16.”

As seminar organizers in Aleppo confirm that Turkey is not involved in the currency switch project, no official statement or position has been made by Turkey in this regard. This step coincides with talks about a possible Turkish intervention in the Syrian territories to establish a buffer zone, which would bolster Ankara’s position.