What's next for Aleppo?

Clashes resumed in Aleppo after the cessation of hostilities there, which raises questions anew on the future of the city and the overall peace process. 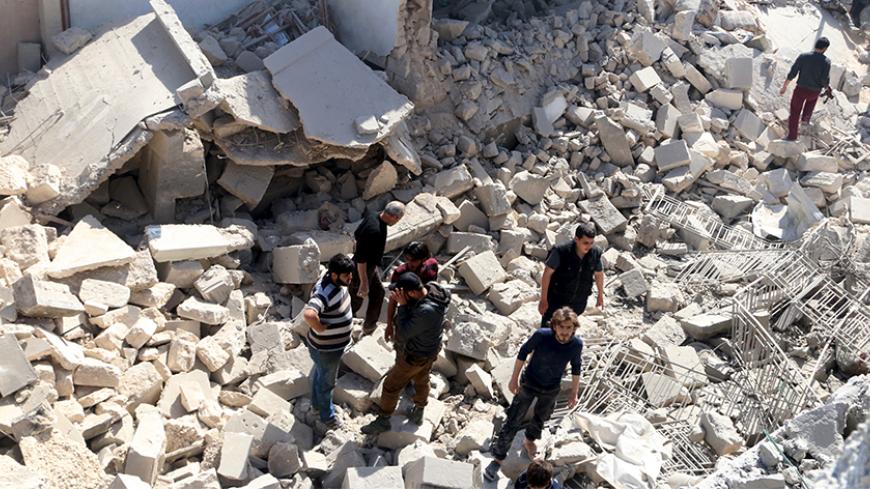 Residents look for survivors amidst the rubble after an airstrike on the rebel-held Old Aleppo, April 16, 2016. - REUTERS/Abdalrhman Ismail

The Feb. 26 cessation of hostilities in Syria, which were followed by a conference in Geneva between warring parties on March 14, gave a glimmer of hope to the Syrian peace negotiations. This hope is now fading, with the resumption of clashes this month between President Bashar al-Assad's regime and the opposition in Aleppo conflating with the stalling of the ongoing peace process in the Swiss city. What are the various scenarios that might play out in Syria, and can a more realist median solution arise from the rubble?

Despite multiple breaches, the level of violence across Syria dropped dramatically over the last few months. “There is a feeling of normalcy in Daraa in spite of clashes with the Yarmouk Brigade, which is affiliated with the Islamic State [IS],” says a fighter from Ahrar al-Sham, who spoke to Al-Monitor on condition of anonymity.

The fragile cease-fire seems to be now collapsing, nonetheless. Syrian opposition factions including the groups Salafist Ahrar al-Sham and Jaysh al-Islam declared a counteroffensive on the regime forces on April 18 dubbed Rad al-Mazalem (Facing Oppression). Aleppo also witnessed an escalation in fighting in the last few weeks around mid-April, as Syrian forces backed by the Russian air force continued their offensive on the city. The area was also the scene of intense clashes between rebels and IS, according to Free Syrian Army Lt. Hassan Hamadeh, who spoke to Al-Monitor. “The rebels are under pressure both from the regime and IS,” he added. The recent fighting between the rebels and the regime has already allowed IS to recapture areas it had lost in northern Aleppo around al-Rai. In addition, a regime airstrike in the area of Maarat al-Numan killed around 40 people this week.

The situation appears to also be devolving on the political side. In Geneva, a source within the opposition told Syrian newswire Alsourianet that it had asked UN special envoy to Syria Staffan de Mistura to postpone the current round of negotiations. “The regime has not taken seriously the negotiations; they are creating diversions to avoid speaking of the transition phase,” Syrian opposition delegate to the UN Najib Ghadban told Al-Monitor. Independently of the UN-led peace negotiations in Geneva, the regime also held parliamentary elections on April 13.

“The regime believes that whatever happens, it will not lose the support of Russia and Iran,” says Fabrice Balanche, a Syria expert at the Washington Institute for Near East Policy. In parallel, the Syrian opposition and its Gulf backers will not accept any power-sharing agreement with Assad. On April 16, a source close to the opposition told Al-Monitor that Assad envoy Riad Daoudi had suggested to de Mistura that Assad was willing to share executive powers with three vice presidents from the opposition — a leak later confirmed by the media and that, according to the source, had been devised by a Washington think tank.

With the cease-fire and negotiations taking a turn for the worse every day, the conflict in Syria appears to be for the long haul, further devastating a country where more than 470,000 people have already died from the fighting over the last five years and half the population has been displaced.

Three possible scenarios appear to be emerging in the wake of the recent breakdown in the peace process. The first — and gloomiest — would entail the conflict regaining full intensity. “While Saudi Arabia and Turkey are not in the best financial condition, they may still beef up their support to the Syrian opposition brigades; they will also want Secretary of State John Kerry to make good on his promise to train and equip rebels if negotiations fail,” Sinan Hatahet, a researcher at the Turkey-based Omran Dirasat, told Al-Monitor.

The second scenario would be maintaining a relative freeze of most demarcation lines, with the exception of a few — including Aleppo. “Syrian President Bashar al-Assad would remain in control of Damascus, the Latakia belt and large urban hubs falling in his turf. The rebels would maintain control over southern Syria, the northwest of the country, and pockets around Aleppo and Damascus, while the Kurds would secure the northern areas,“ explains Balanche. In such a framework, international and local military offensives would be maintained against IS areas, according to Balanche. Such a scenario is highly probable given the manpower problem faced by regime forces, which are stretched thin and have to be moved from one battle front to the other.

The last and most positive scenario would entail realism prevailing on the Syrian political scene: the absence of a clear victory in favor of any of the warring sides, the manpower issue the regime is facing, combined with the end of Barack Obama's presidency next November, who could be replaced by a more hawkish contender, opening a window of opportunities for a compromise. “There is no balance of power in Syria; it is a balance of weaknesses. No one can win,” says Hatahet.

Local and international parties also have their own calculations. “President Assad would prefer to have a solution on Syria this summer, because they know that a deal under President Barack Obama would be in their favor [as opposed to] the next administration,” says Balanche. Europe is also pressed by time with the refugee crisis with more than 1 million people reaching the shores of the European Union in 2015 and around 4,000 people dying while crossing the Mediterranean.

Europe is also keen on stabilizing Syria, the war there and in Iraq, reverberating across countries with a multiplication of terror attacks in various European capitals, the latest of which injured over 300 people and killed 35 in Brussels.

Ultimately, the cease-fire and the second round of Geneva conferences have demonstrated the leverage that external players such as Russia and the United States — which backed both initiatives — have on Syrian protagonists. “We need to keep an eye on the Russian-US talks," advises Ghadban.

Moscow remains the joker in this game of cards, showing its ability to reign in the regime's ambitions when needed while continuing, at least officially, to show support for a negotiated solution. Such a solution may be far from a full-fledged peace deal and could entail re-establishing a cease-fire and power-sharing agreement by region while working toward an exit strategy, where the divisive issue of Assad’s departure would be the last phase to be tackled by the political track. A final option would be the application of the power sharing agreement suggested by de Mistura last week, allowing for Assad to be stripped of executive powers, which would be transferred to a transitional body. It remains to be seen if Assad’s powerful backers Russia and Iran would agree to such a deal and if it could be implemented in real terms, given that the preservation of the security apparatus would allow Assad to still wield significant power, more specically on his political ennemies.