Does Israel have justification to enter West Bank's Area A?

Palestinians and Israelis disagree over the legality of the Israeli army pursuing Palestinian fugitives into Area A of the West Bank. 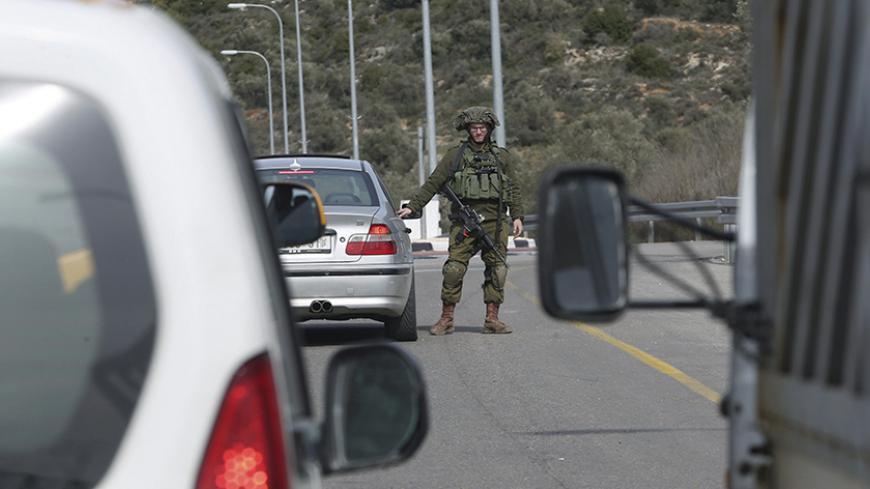 An Israeli soldier searches a Palestinian car at an Israeli checkpoint leading to the West Bank city of Ramallah, Feb. 1, 2016. - REUTERS/Mohamad Torokman

The outbreak of the latest intifada in October, accompanied by the intensification of Palestinian attacks against Israeli targets, which resulted in the death of 33 Israelis and the injury of over 250 others, provided the Israeli army with an excuse to further encroach on the West Bank under the pretext of a hot pursuit of Palestinian fugitives, without any distinction as to the statuses of Areas A, B and C. Such hot pursuits began after Israel launched Operation Defensive Shield in the West Bank in 2002 following suicide bombings undertaken by Palestinian factions between 2001 and 2002 within Israel, which killed and wounded hundreds of Israelis.

Amin Maqbul, secretary-general of Fatah's Revolutionary Council, told Al-Monitor, “Israel’s determination to invade Area A reveals its intent of fueling security tensions with Palestinians. It is also indicative of Israel’s refusal of the security and military recommendations by the IDF [Israel Defense Forces] and the Shin Bet in late November 2015, which included a series of provisions for the PA, such as strengthening its security by giving it more weapons, as well as granting work permits for Palestinians inside Israel, releasing Palestinian prisoners, granting permits for the export of goods from the West Bank to Israeli factories, allowing Palestinians to build houses in Area C in the West Bank, in addition to Israel refraining from any military action in Area A. This means that Israel is making a wrong political judgment that may harm the region in general by further exacerbating the [heated] situation. The PA can respond to these Israeli measures by calling for suspending the security coordination and reconsidering the political agreements signed with Israel such as the Oslo Accord in 1993, the Paris Economic Protocol in 1994 and the security coordination agreement in 1994.”

The Israeli newspaper Haaretz reported April 7 that Israeli Prime Minister Benjamin Netanyahu had stated that the IDF's freedom of action in Area A is sacred, which paves the way for the IDF to enter all areas in the West Bank without differentiating between Areas A, B or C.

On the same day, Haaretz also reported that Education Minister Naftali Bennett warned that if the Israeli government decides to reduce the IDF’s operations in Palestinian cities of the West Bank, this may undermine the coalition’s stability, claiming that the IDF's control over Area A is a guarantee of Israel's security.

By conducting hot pursuits in Area A, Israel aims to chase and arrest Palestinians wanted on security charges, including those planning to launch armed attacks against Israel. The Shin Bet compared these fugitives to a “ticking bomb,” claiming that it cannot afford to waste time by coordinating with the Palestinians before arresting the fugitives, who can exploit the situation to go underground and elude Palestinian security before launching their attack. It should be noted that in the period between October 2015 and March 2016, Israel was able to detain 3,000 Palestinian fugitives.

A Palestinian official following the course of the security coordination with Israel told Al-Monitor on condition of anonymity, “The PA believes Area A is one unit that cannot be divided and refuses to surrender any part of it. It also stands firm on Palestinian sovereignty over it and the need for Israel to respect and refrain from violating this sovereignty under any excuse. In the past few weeks, Palestinian officials urged their Israeli counterparts to restore the PA’s control of Area A according to a preset short schedule without any further delay, because the PA did not and will not tolerate the Israeli security measures labeled as hot pursuits.”

Meanwhile, Israel insists on chasing Palestinians in Area A, although Maj. Gen. Roni Numa, the head of the IDF's Central Command, pointed that the PA is intensifying its activities against perpetrators.

In its article, Haaretz reported that a senior official involved in the secret talks quoted Numa as saying that until a few months ago, Israel was handling 85% of counterterror activity in the West Bank and the PA only 15%. However, the equation changed in March, and the PA started handling 40% of the hot pursuits, with Israel security and military action in the West Bank dropping down to 60%. Nonetheless, Israel seems to only trust its security forces to maintain its security.

On March 15, an Israeli political source told Hebrew radio on condition of anonymity that the secret talks with the Palestinians for putting certain areas under the PA’s security control led to a dead end since the Palestinians refused to meet the Israeli conditions, no understandings were reached regarding changing the pace of the security and military Israeli action in the West Bank; the source said the IDF will continue to operate wherever and whenever it deems necessary.

Former Endowments (Awqaf) Minister and Hamas leader in Hebron Nayef al-Rajoub told Al-Monitor, “The hot pursuits are nothing new for Israel, although Palestinian security services have been making significant contributions toward ensuring Israeli security and protecting the Zionist project rather than the national Palestinian one. But sometimes, the Israeli army does not trust the information provided by Palestinians, leading to Israeli incursions in Area A, thus undermining what is left of the PA’s shadow relevance in the West Bank to the extent that it is now seeking to preserve its interests with the Israelis for the sake of some of the PA’s influential figures to the detriment of the Palestinian national cause.”

Seven months into the intifada, and with the Israeli army continuing its operations in Area A, questions are raised as to the fate of the security talks that started in March 2015 between the two sides on the IDF’s redeployment in Palestinian cities such as Ramallah and Jericho.

However, the ongoing hot pursuits may suggest an Israeli plan to take over some areas in the West Bank while keeping its security sway under different terminology such as security areas, armed intervention and securing settlements.

Hasan Kharisha, the second deputy speaker of the Palestinian Legislative Council, told Al-Monitor, “Hot pursuits are entrenched in the Israeli army’s ideology. I am fully convinced that they are being carried out in coordination with Palestinian security. This coordination is intensifying day after day with more attacks being thwarted and ongoing exchange of Palestinian militants between the security services of the two sides. This indicates that the PA does not seem serious about its threats of halting security coordination, which provides Israel with a cover to continue its pursuits against Palestinians.”

It seems that the Israeli army enters Area A whenever it pleases and carries out armed pursuits. Sometimes Israeli authorities inform the PA about it and request intel concerning some armed groups. It should be noted that the Israeli army withdraws its troops after arresting the fugitives it is pursuing, which is what happened in cities such as Hebron, Nablus, Jenin and Ramallah.

Raed Noueirat, a political science professor at An-Najah National University in Nablus and director of the Contemporary Center for Studies and Policy Analysis, told Al-Monitor, “Israel’s ongoing armed pursuits promote the Israeli government’s popularity among Israelis and provide the IDF with more accurate information about the West Bank than the Palestinian security services do. At the same time, Israel prefers the collaboration between its own security apparatuses and their Palestinian counterparts within the West Bank in order to preserve maximum security.”

Israel does not seem inclined to halt its hot pursuits against Palestinian fugitives anytime soon, amid the ongoing intifada and the helpless PA’s failure to end it or contain it, neither politically nor militarily. As a result, what is remaining of the PA’s imaginary sovereignty over the West Bank, as per the Oslo Accord, is gradually waning.