Israeli-Palestinian relations are back to square one as Israel recently threatened to invade and occupy the West Bank. 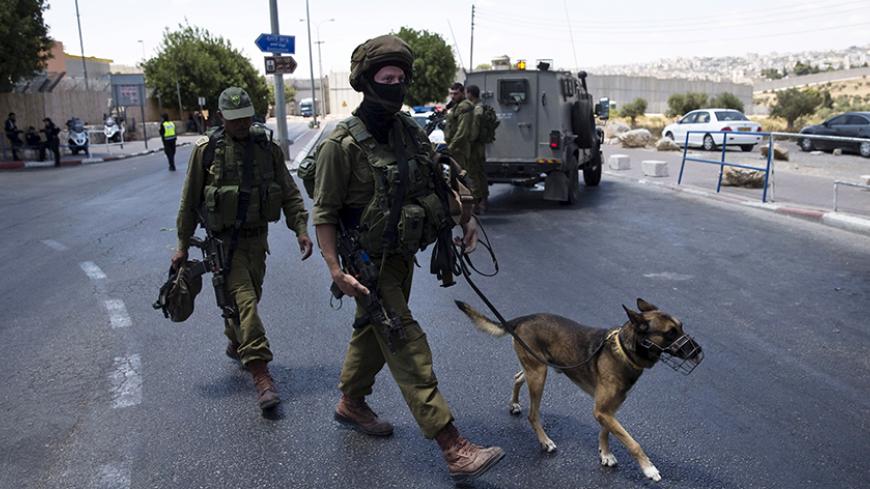 Israeli soldiers walk with a dog next to an Israeli checkpoint near the West Bank town of Bethlehem, after a stabbing attack by a Palestinian woman on a member of the Israeli border police, June 29, 2015. - REUTERS/Ronen Zvulun

Relations between Israel and the Palestinian Authority have been witnessing a political deadlock since the negotiations sponsored by US Secretary of State John Kerry stopped in April 2014.

In November 2014, Amin Maqboul, the secretary-general of Fatah’s Revolutionary Council, revealed that an official Israeli threat was made to the Palestinian Authority of a total invasion and military control of Ramallah.

Tension escalated between both parties and relations seem to have reached a dead end following the announcement of the Israeli elections’ results in March, which resulted in the formation of the most extreme right-wing coalition in Israeli history, led by Prime Minister Benjamin Netanyahu.

Fatah spokesman Ahmad Assaf said March 10 that Israel had made a second threat to entirely occupy the West Bank again and liberate itself from all agreements with the Palestinian Authority should the latter stop security coordination. This Israeli threat came following the authority’s measures to join international institutions.

The third Israeli threat was reported by Kuwaiti al-Rai newspaper June 14, which quoted an anonymous source close to the Palestinian presidency stating that an anonymous high-ranking Israeli security official threatened to occupy the West Bank in 24 hours during a meeting with the Palestinian civil affairs minister, Hussein al-Sheikh, in early June in an undisclosed location.

A high-ranking Palestinian official told Al-Monitor on condition of anonymity, “The PA is taking the Israeli threats to occupy the West Bank seriously. We received such threats from different parties” that he refused to disclose, adding, “This means that Israel’s ability to occupy the West Bank and test its practical and military capabilities has reached an advanced level.”

The West Bank was last invaded by Israel in March 2002, when the Israeli army launched Operation Defensive Shield in response to Palestinians carrying out armed operations, such as rigged cars, between late 2001 and the end of 2002. The Israeli army remained in the West Bank for four months, from March 2002 to July 2002.

The current field situation in the West Bank is proof of the quasi-absolute security control imposed by the Israeli army. The latter breaks into any camp or village whenever it pleases through coordination with Palestinian security services, and it arrests wanted people by conducting night raids, the most recent of which took place June 1 in different West Bank areas, including Bethlehem, Nablus and Hebron.

President Mahmoud Abbas even said in December 2009 that he “lives under the Israeli boots,” referring to the Israeli military control. This may be proof of the extent of the Israeli infiltration in the West Bank.

The most recent Israeli threat to invade the West Bank coincides with the authority’s continuous diplomatic efforts to join the International Criminal Court — which succeeded April 1 — and with the authority implying that it might stop security coordination and contribute to the international boycott against Israel.

Israel had announced a series of sanctions against the authorities; in April 2014, Israel froze Palestinian tax revenue funds.

In January, Israel demanded the US halt financial aid provided to the authority, which was carrying on with its diplomatic and political efforts against Israel in international forums. During the same period, Israel also said it was considering filing lawsuits against Palestinian figures, as it will not stand idly on the international judicial level. It said it is ready to respond to the Palestinian lawsuits with counter-lawsuits.

On June 28, the Israeli station Reshet Bet revealed details about Abbas and his assistants’ flights outside the Palestinian territories, at a time when the Palestinian Authority is suffering a financial crisis.

The PLO’s chief negotiator, Saeb Erekat, said June 28 that the Israeli announcement about Abbas’ flights at this time reveals Israeli concerns about the diplomatic success that the PLO and its institutions are having.

The Israeli threats against Palestinians reached their peak when the Israeli army conducted an unexpected military maneuver in the West Bank on March 1, in which 13,000 soldiers participated. The maneuver took into account the scenarios that could result from a possible explosion of the situation in the West Bank, such as the outbreak of popular demonstrations and armed attacks. These scenarios also included invading and occupying the West Bank.

Fatah Central Committee member Jamal Mohaisen said March 2 that the Israeli military maneuvers in the West Bank come in the context of the continuous occupation and Israel’s lack of commitment to the Oslo Accord not to enter the Palestinian territories. He also noted that these maneuvers are messages addressed to the Palestinian Authority to stop resorting to the ICC.

In April 2015, the Israeli army sent the elite Golani Brigade to the West Bank, after a three-year absence, in response to armed attacks against Israeli settlers; the army did not mention the duration of the brigade’s stay in the West Bank.

Wassef Erekat, a retired major general from the Palestinian Authority, told Al-Monitor, “The recent Israeli military measures reflect aggressive Israeli intentions aiming at a new escalation in the West Bank, because the Golani Brigade’s job is to face armies and military operations, and not to confront unarmed civilians.”

On the military level, the Israeli army is not facing any field problems in occupying the West Bank again; its forces are spread in all cities and villages. In addition, it has a list of targets that it constantly updates in order to strike its targets whenever it decides to invade the West Bank. Among these targets are the Palestinian Authority’s public buildings, the Hamas-affiliated charities, the youths affiliated with armed Palestinian factions and the houses of people wanted by the Israeli intelligence.

The official Palestinian news agency, Wafa, published in 2011 a survey showing the geographic spread of the Israeli army camps in the West Bank. According to the survey, the Israeli camps are set up in east, west, north and south West Bank, which makes the possibility of Israel invading it again a probable option for the army.

Al-Monitor obtained an internal security document from the Palestinian Authority prepared by unknown parties in recent weeks, but still not published in the media as it was only circulated to a limited extent between Palestinian officers in the West Bank.

The document read, “The question that preoccupied Palestinian decision-makers is not about the possibility of Israel implementing its threats to invade the West Bank or not. The question is when will the invasion take place, which region would it reach and how long will it last?”

The document also stated, “The Israeli, regional and international reality creates a perfect timing for the Israelis to completely revoke the peace process, by reoccupying the Palestinian cities in the West Bank, revoking the PA’s authorities in these cities, granting the Israeli Civil Administration more tasks and intensifying the semi-permanent military presence of the Israeli army in the West Bank.”

The Palestinians are well aware that they are facing a right-wing government that believes the West Bank is the main fighting pit in light of the latest security developments. Armed operations against Israeli settlers and soldiers are increasing, while Hamas’ presence in the West Bank is growing, which could negatively affect the security coordination between Israel and the Palestinian Authority, should the negotiations remain suspended.

These Israeli fears could lead to occupying the West Bank again, which may be an option for Israeli army generals in the event that a green light is provided on the political level that does not foresee peace with Palestinians anytime soon.