A decade ago, crossing from Gaza at the Erez checkpoint was a nightmare, but now under Defense Ministry management the once-dangerous crossing offers a model of order and security for West Bank facilities. 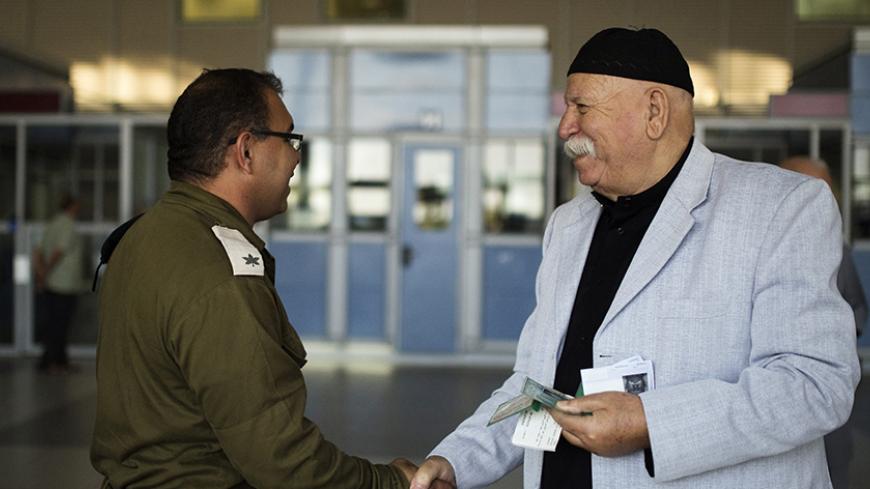 Tens of thousands of Gaza Strip residents, Palestinians who used to work in Israel, bear scars from the Erez crossing. They used to call it the “barrier of death” because the passage to Israel through the crowded crossing was life threatening. Hundreds required medical treatment after suffocating there or being trampled in the cruel battle for survival at the antiquated, congested security checkpoints. Injuries were par for the course. There isn’t a single Palestinian laborer who traveled from Gaza to work in Israel who has not experienced the travails of this crossing, with its notorious and nightmarish carousels – revolving steel barriers through which they passed to the Israeli side.

More than 10 years ago, I arrived at the Erez crossing with a camera crew. The footage shot that night deeply shocked television viewers and decision-makers in Israel. The film crew and I barely escaped being trampled by the thousands of Palestinians who stormed the revolving turnstiles, rushing not to miss a day of work. We climbed onto the roof of the revolving barrier and the masses charged forward below us. The Israeli soldiers stationed at the facility controlled the barrier by pressing a button, every so often allowing small groups of laborers to push through the narrow passages leading to the turnstiles. Anyone not fast enough to slither through to the other side risked being trapped against the iron rails along the sides of the passageway. Two Palestinians laborers were crushed to death in this manner in 2004. Being stomped on, injured and humiliated was a daily routine for tens of thousands of Gaza residents for whom working in Israel was the only way to make a living.

Similarly horrifying spectacles reminiscent of the terrible years at the Erez crossing occur daily at the other crossings between Israel and the West Bank, including the one north of Bethlehem, known as the 300 Checkpoint, and the one at Qalandiya near Ramallah. The humiliation and horrendous conditions that the West Bank Palestinians endure at the crossings even riled Agriculture Minister Uri Ariel of the right-wing HaBayit Hayehudi. Ariel said April 15, “The State of Israel and its defense agencies should be ashamed of this disgrace: People standing there under inhumane conditions in the heavy summer heat and the winter rains.”

The West Bank roadblocks are run by the Israel Defense Forces and the police, but the Erez crossing was handed over in 2006 to the Ministry of Defense, which reopened it with a new terminal in 2007. Palestinians now call it “the good crossing.”

“Erez today has become like the ‘Good Fence’ that we used to have on the border between Lebanon and Israel,” said Lt. Col. (res.) Shlomo Tsaban, who has been running the facility since it was revamped some nine years ago.

Shock at the conditions that prevailed at the Erez crossing in the past led Prime Minister Ariel Sharon to order it widened into a humane crossing with effective and innovative security checks, able to accommodate tens of thousands every day. The large new building was erected on the foundations of the old crossing, and it looks more like an airport or seaport passenger terminal than a border crossing between enemies.

About two months after the new crossing was inaugurated, Hamas carried out a coup in the Gaza Strip and the residents have since been banned from working in Israel. Today, the Erez crossing serves mostly sick people, traders and the staff of welfare and aid agencies operating in Gaza.

“This reality is surreal and the crossing operates in a surrealistic manner,” Tsaban told Al-Monitor. Hamas officials stand on one side, Israeli soldiers on the other in a state of preparedness along the border fence and in the middle the crossing serves travelers. But the calm inside the terminals is misleading. There, there is no sense of tension, no war or fear of violence between the sides. Only the sounds of the Israeli Air Force planes circling overhead and the shrieks of artillery shells fired from the Strip into Israel every few days provide a reminder of the true state of things.

Some 1,000 people come through the Erez crossing daily. Ambulances from Gaza transport high-risk patients to hospitals in Israel. On a tour of the area last week, I heard Tsaban addressing the soldiers and civilians who had convened in the staff dining room for a toast ahead of the Passover holiday. He spoke about how things should be run at a border crossing between two warring sides. According to him, they should go about their business as if there were no war, no violence and no tension. They should take all possible precautions, but not at the expense of those passing through the crossing.

“We see the scenes at the West Bank crossings and we can only regret the conditions and the suffering [the Palestinians] endure there every day on their way to provide for their families,” Tsaban told his staff, adding, “Everyone remembers that things here were different once, nothing we should be proud of. But there’s been a change. Every worker here knows that a Palestinian coming to us from the other side has the right to the best treatment he deserves.” Tsaban laid down a basic rule for dealing with those passing through from Gaza to Israel: “A ten-minute wait is longer than the service goal we set for ourselves.” With many of those passing through being sick people on their way to life-saving medical treatment in Israel, a lengthy wait is dangerous. “We have to enable them to make their way from Gaza to Israel in the easiest, most convenient way.”

Given that Gaza has been under blockade for nine years, meetings between Palestinians from the Strip and Israelis are fairly rare. Some of those crossing at Erez are seeing an Israeli for the first time in their lives, and the encounter confuses them. This is not the Israeli they have grown used to seeing on Hamas television, and these are not the Israelis they saw in clashes with the IDF in Gaza.

Israeli defense officials have recently started granting permits to young Gaza residents to cross into Israel accompanied by their parents. Whether children of merchants or young men and women accompanying sick people heading for treatment in Israel, the idea is for the young Palestinians to meet Israelis. Such meetings might change their conception of the neighbors on the other side of the Erez crossing that has been largely molded by Hamas media. The plan is perhaps a drop of sanity in a sea of hostility between Israel and Gaza, but it’s a step in the right direction and part of the process that has turned the Erez crossing from a death trap to a gate of hope.

The Erez model should be applied at the West Bank crossings. Although the number of those passing daily through Erez cannot compare to the flow at the overloaded West Bank crossing points, the IDF should hand over responsibility for the crossings to the Ministry of Defense and the Port Authority.