Every day, Israeli volunteers drive Gazan medical patients, including children sick with cancer, from the Gaza border checkpoint to hospitals in Israel. 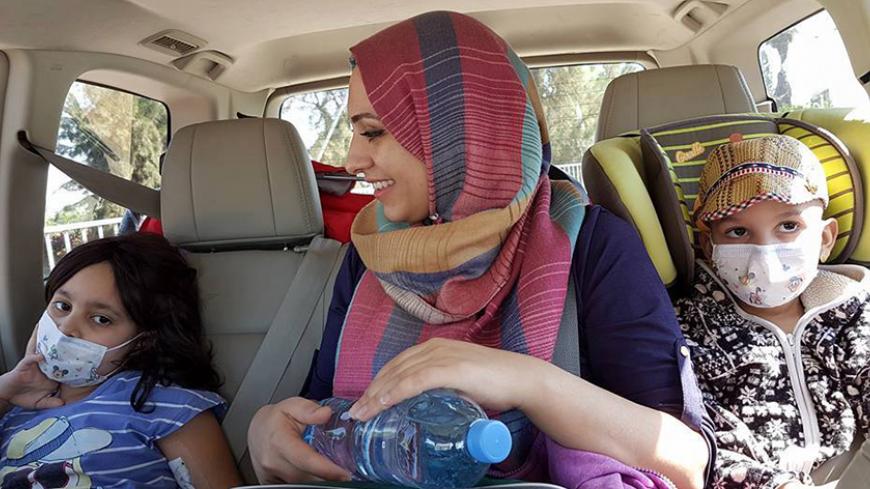 As part of Road to Recovery, sick children are being driven by a volunteer to Tel Hashomer hospital in Israel, June 2, 2016. - Facebook/theroadtorecovery1

The conversation with Jamal, a resident of the Nuseirat refugee camp in the Gaza Strip, was fraught with emotion — long periods of silence punctured by weeping. His 11-year-old daughter, Rima, was diagnosed several months ago with leukemia, and he fought for weeks with the Gaza health authorities to get permission to take her out of the Gaza Strip for life-saving treatment in Israel.

“When we got there, her situation was almost hopeless. They said she could not be saved,” he told Al-Monitor, asking that only his first name be used. Initially, he said, the doctors considered sending her home, but eventually Rima underwent a bone marrow transplant and her situation improved, though she was still not out of the woods. In November, she was released from the hospital to return to her home in Gaza. Once every two weeks she has to go back to the Israeli hospital for checkups and monitoring.

But the drive from Gaza to Tel Aviv is an expense very few in Gaza can afford. A taxi to Tel Aviv or Jerusalem from the Erez crossing on the Gaza-Israel border can cost as much as 500 shekels ($133). It's a fortune in the besieged enclave, where many inhabitants are unemployed and rely on handouts from the United Nations Relief and Works Agency for Palestine Refugees in the Near East. Were it not for a group of Israeli volunteers who turn up every morning at the Gaza border crossings into Israel (and at Israeli military roadblocks throughout the West Bank), these seriously ill Palestinians would probably not get the life-saving care they need.

Road to Recovery is an Israeli nonprofit that takes Palestinians from the crossings and roadblocks to hospitals. It was founded by Yuval Roth, whose brother Ehud was kidnapped and murdered by Palestinians from the Izz ad-Din al-Qassam Brigades while he was serving in the military reserves in 1993. Another volunteer who organizes volunteer drivers is Buma Inbar, whose son Yotam, a Golani Brigade fighter, was killed in Lebanon in 1995. Buma has since taken on the task of driving Palestinians who essentially have no other way to get to Israeli hospitals for treatment.

“The demand far outstrips what we are able to supply,” said an activity coordinator for Road to Recovery who asked to be identified only as A. She is in daily contact with Palestinian Authority (PA) officials in Ramallah and with their representatives in Gaza, through whom she arranges pickups for Palestinians needing to be driven to the hospital. A. said some 700 sick Gaza residents and their escorts come out of Gaza every week, but not all get the transportation they need. Even after investing tremendous efforts into convincing the local authorities to let them go for treatment in Israel, some never make it to the hospital.

Jamal said he has the phone numbers of volunteers to coordinate his daughter’s travel in Israel. “I know they are doing everything they can," he said with a sigh, "but every time I see more and more sick people waiting at the Erez crossing. Sometimes these are kids who can barely walk or are in wheelchairs, and sometimes with a grandfather or grandmother accompanying them because their parents are not allowed to leave Gaza to go with them. Isn’t it a pity? Some wait for half a day at the crossing, until they miss their appointment at the hospital and have to go back home without getting treatment.”

“[Palestinian President Mahmoud] Abbas has forgotten them. They are paying the price of the struggle between Hamas and Fatah, because they are the weakest and most downtrodden links in the chain,” an officer with Israel’s Southern Command told Al-Monitor on condition of anonymity. “They could have rented buses for them or recruited transportation companies with Arab-Israeli drivers who speak Arabic and could have made it easier for them, at least to give them the feeling that their lives matter,” he said.

There was once a proposal to set up a transportation system from within Gaza to the Erez crossing and from the crossing to Israeli hospitals, he said, but the initiative was buried because the PA was unwilling to invest in it. “It’s convenient for the PA to depend on Israeli volunteer organizations,” he added.

Amram Mitzna, the former Labor chairman and one-time mayor of Haifa, is one of the Road to Recovery’s volunteers. For the past year, he has been driving to the Erez crossing every Monday morning to take sick Palestinians to Jerusalem hospitals for treatment. He told Al-Monitor that both his sisters volunteer with the organization, and he joined them.

“I try to do even small things in order to feel at peace with myself and have contact with Palestinian society,” he said in an interview. “To do good for sick, miserable people who go through an impossible system in the Gaza Strip and come up against the terrorist rule of Hamas that doesn’t show consideration for anyone. Medical treatment is something basic and humanitarian.”

Mitzna said some of his sick passengers recognize him. “They know who I am and they’re very moved over this gesture,” he said. “But I don’t talk politics with them; I talk with them about daily life. I very much want to hear what they’re going through, what life is like there in Gaza under Hamas rule, but usually they’re not interested in complaining to me.”

Mitzna said the Palestinian patients who see Israeli volunteers drive up in their own cars to take them for the treatment they so desperately need are deeply touched. “I hope they will have a small corner in their hearts for us, because that’s the least we can do in this insane and impossible reality in which we live,” he concluded.