Iran’s non-oil trade balance has turned positive for the first time in the history of the Islamic Republic of Iran, but is this good news? 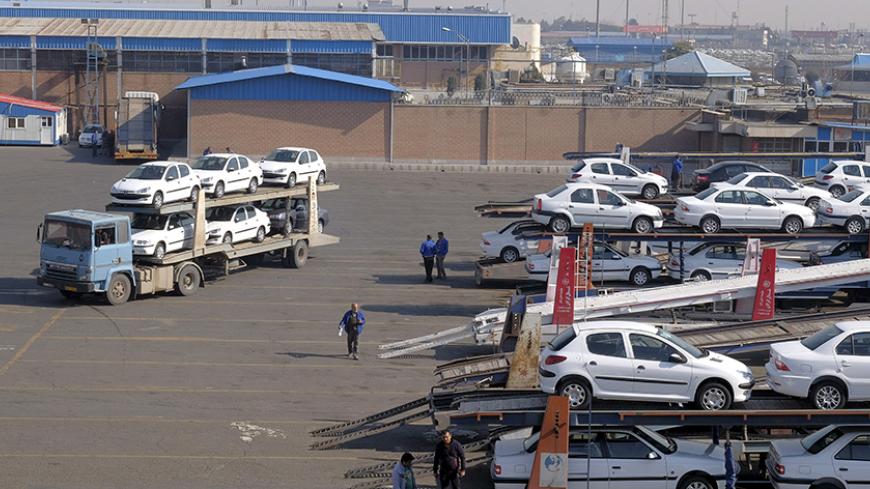 TEHRAN, Iran — Iran’s non-oil balance of trade turned positive in the past Iranian year, which ended March 19. The $916 million trade surplus is the country’s first since its 1979 Islamic Revolution. On April 4, President Hassan Rouhani hailed it as an achievement that the country secured despite international sanctions as well as low oil prices.

“Last year, non-oil exports exceeded non-oil imports for the first time since the Islamic Revolution. Progress has been achieved through the support and participation of the people as well as their unity,” Rouhani said.

Figures published by Iran’s Customs Administration for the past Iranian calendar year put non-oil exports at $42.4 billion and imports at $41.5 billion. The non-oil trade balance turned positive as exports witnessed declines of 16.1% and imports declined by 22.5%, compared with the same period in the previous Iranian year. 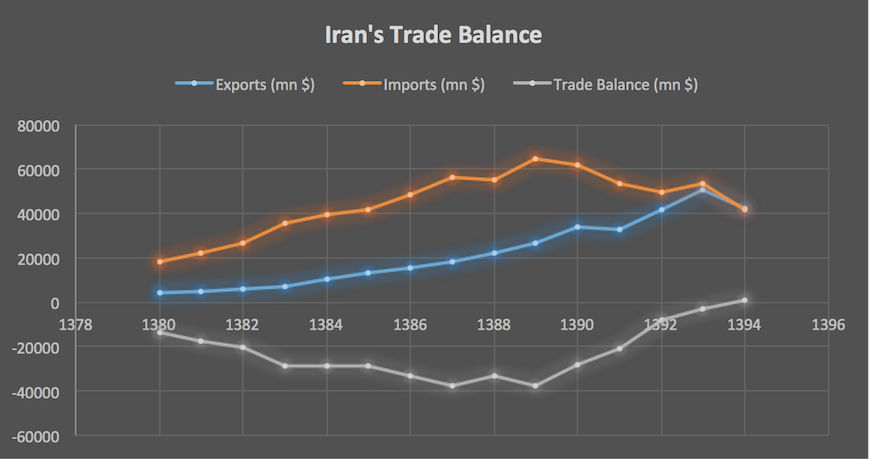 Ali Mohammad Goodarzi, adviser to the minister and head of public relations and the communications center at the Ministry of Industry, Mine and Trade, believes that the government’s policies played a direct role in achieving a positive trade balance.

“The government’s success in the talks with the P5+1 countries (the five permanent UN Security Council members plus Germany) over Iran’s nuclear program, improvement of the business environment, incremental return of Iran to the global economy and the creation of mutual trust between Iran and the European Union are among the factors that led to a positive trade balance,” Goodarzi told Al-Monitor.

As for the domestic policies, the Iranian official believes that “controlling the country’s inflation as well as export-oriented strategies and monetary discipline of the government” have also played a role.

Rouhani and other administration officials’ hailing of the positive trade balance has not been welcomed by everyone. Some figures active in the economic arena do not regard it as an achievement, arguing that it was only the result of sharp drops in both imports and exports, as well as what they call “unusual economic conditions.”

Mohammad Reza Sabzalipur, head of the World Trade Center Tehran, told al-Monitor, “It is not a positive balance of trade. Rather it shows austerity and economic contraction. The overall foreign trade of the country was around $40 billion last year, of which imports shrank by nearly 25% and exports by 18% compared to the same period the previous year.”

Critics also argue that the non-oil trade surplus does not reflect an economic improvement, given that Iran’s economy is hit by a recession while falling imports have reduced domestic production.

Asadollah Asgaroladi, a prominent businessman who is also a member of Iran’s Chamber of Commerce, told the local Eghtesad News, “It is not a good matter that Iran’s balance of trade has become positive. If imports are reduced, domestic demands cannot be met. It is good to reduce imports of consumer goods, but imports of production machinery and raw materials should be increased, otherwise smugglers will import them.”

Although official figures indicate a positive trade balance, it is no secret that smuggling, which is not included in official data, has long been a major issue for the Islamic Republic.

The value of smuggled imports is estimated at an average of between $15 billion to $25 billion a year. Mehdi Pourqazi, head of the Industry Commission at Tehran’s Chamber of Commerce, told the online outlet Omid-e-Iranian that if this estimate is added to the bill for legal imports, “the balance of trade would not be positive.”

Meanwhile, some economic experts see distorted foreign exchange rates and the government ban on imports of luxury cars as other factors behind the slide in imports. They argue that foreign exchange rates must be determined based on economic realities rather than petrodollars to boost domestic production and exports while reducing smuggling.

As Rouhani administration officials — and their critics — continue to see the country’s trade balance as black or white, there are experts who believe it all could be both an opportunity and a threat. Daniel Khazeni-Rad, an editor at English-language economic daily Financial Tribune, told Al-Monitor, “The positive trade balance can be seen in two ways. First, it shows that Iran finally has moved from an oil-based economy to a mixed economy. It also denotes a worrying trend on the other hand as local manufacturers have tougher external competition. This is likely to be compounded when Iran's application to the World Trade Organization is accepted and tariffs and protectionist policies must make way for fairer treatment of foreign businesses."

Iranian officials stress that the government has tried to lower imports of basic goods such as wheat and replace them with domestically made products — all part of its policy to implement the so-called resistance economy promoted by Supreme Leader Ayatollah Ali Khamenei.

Following the Jan. 16 removal of nuclear-related sanctions as part of the implementation of the nuclear deal, international institutions such as the World Bank have predicted that Iran’s economy will grow 3-5% in 2016. Economic experts say that an increase in exports in the non-oil sectors will largely depend on how the government uses its foreign exchange reserves. With the expected gradual return of Iranian business to the global market, it now remains to be seen how the government can materialize its promise to revive the country's economy and expand its share of global trade.