Iranian newspapers have returned after a two-week hiatus, with one hard-line editor offering up what seems to be an endorsement of US presidential candidate Donald Trump. 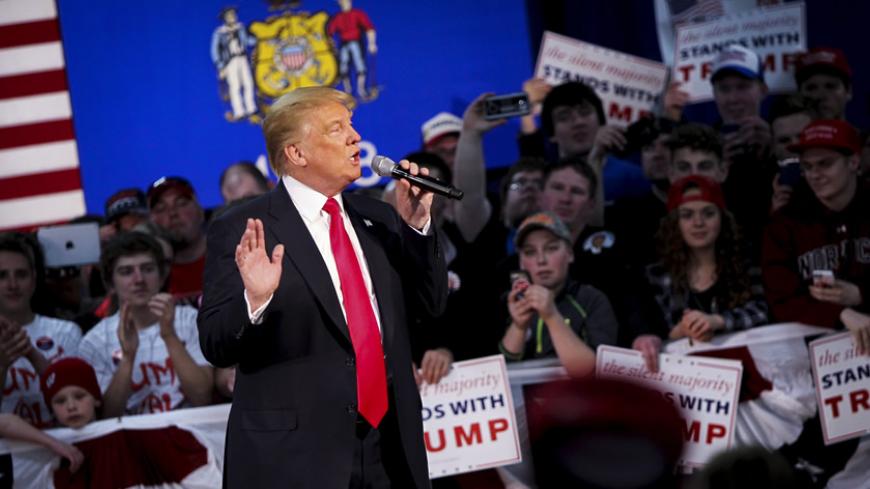 Iranian newspapers have come back from a two-week Nowruz vacation ready to renew old partisan fights with new talking points. While websites and news agencies continued to cover the significant stories of the country, it is the print media where the partisan divide is the most obvious. This year it seems that the US presidential elections have sparked an early row.

“The wisest plan of crazy [Donald] Trump is tearing up the nuclear deal,” Hossein Shariatmadari, editor of the hard-line Kayhan newspaper, told Fars News Agency when asked about the Republican front-runner’s opposition to the nuclear deal. Shariatmadari called the nuclear deal a “golden document” for the United States but insisted that for Iran it has caused nothing but “damages, humiliation and deception.” Instead of making proclamations, Shariatmadari invited the administration to show one achievement of the nuclear deal.

While the director general for political affairs of the Foreign Ministry, Hamid Baeidinejad, responded that Shariatmadari’s comments were surprising, it was Reformist Arman Daily that compared Shariatmadari to Trump, who is sometimes simply referred to as “crazy Trump” in Iranian media. In the front-page story titled “What Shariatmadari and Trump have in common,” Arman Daily wrote that Trump’s opposition to the nuclear deal has made “domestic critics happy,” and that Shariatmadari “once again become one voice with American extremists.”

Two and a half months after the implementation of the nuclear deal, there still continue to be serious disagreements within Iran over its achievements. In an interview with Iranian television April 2, Abbas Araghchi, deputy foreign minister and chief of staff for the implementation of the nuclear deal, appears to also be tasked with the job of asking Iranians to be patient to see the results of the deal.

Araghchi said all the sanctions that were planned to be removed have been removed, but warned it would take time for Iran to get back to where it was pre-sanctions, given that they went from selling 2.5 million barrels a day to 1 million barrels. Perhaps showing frustration with domestic criticism, Araghchi said, “The West promised to lift oil sanctions — they did not promise to find us oil customers.”

While there have been questions over other countries seeking to do business with Iran fearing the remaining US sanctions not related to the nuclear program, Araghchi also addressed other concerns that foreign businesses may have, saying, “Sometimes we fuel distrust a little bit and if we want to solve problems quicker we have to create this trust.”

While the administration is hoping that the results of the nuclear deal improve the economic situation, a number of Iranian media looked domestically toward Supreme Leader Ayatollah Ali Khamenei’s slogan for the year: "Economy of Resistance: Action and Implementation." The Iran newspaper, which operates under the administration, dedicated four articles to the topic. Most of these articles had a positive spin, with Economy Minister Ali Tayebnia suggesting that the implementation of the resistance economy had already begun. Hard-line Vatan-e Emroz, which has been opposed to many of President Hassan Rouhani’s policies, dedicated four of the six articles on its front page to the economy, perhaps suggesting that this is where they will be able to apply the most pressure on the administration in the upcoming year.

One interesting topic raised in the Iran newspaper was whether or not Iranian newspapers should take a two-week holiday for Nowruz. On April 1, many newspapers published their first papers since March 18, two days before the Iranian New Year. The author wrote, “A two-week media holiday in a world where the media says the first word is unacceptable in every way.” The article continued, “Any country that can have no newspapers for two weeks can go all 52 weeks of the year without a newspaper.”

The author conceded that the biggest obstacle is the distribution networks to newsstands during the holiday schedule, when many kiosks are closed. According to the author, only a few voices each year raise this issue. However, the author believes that it would not be difficult to change the holiday schedule to only the four official days that are given for Nowruz. The article asked readers to write in and ask the newspaper owners and editors to change this policy.