How the nuclear deal's failings ignited anti-Western sentiment in Iran

In the absence of what Iranian officials see as the lack of full implementation of the nuclear deal, the factors that could reignite anti-US sentiment in Iran appear to be back in place. 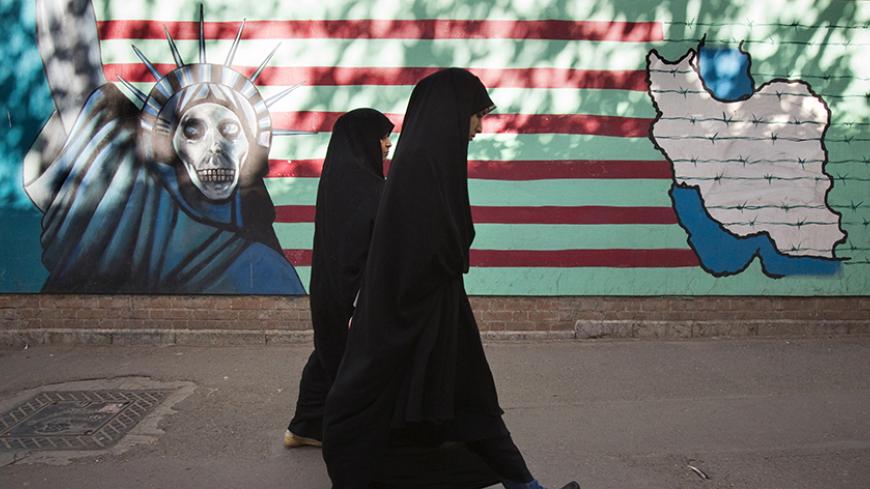 Iranian women walk past an anti-US mural on the wall of the former US Embassy in Tehran, Oct. 12, 2011. - REUTERS/Morteza Nikoubazl

Only four years ago, a meeting between an Iranian foreign minister and his US counterpart would have dominated news and stirred criticism by both Iranian and American hawks. Not anymore, thanks to the Joint Comprehensive Plan of Action (JCPOA) — the result of record-breaking meetings between Mohammad Javad Zarif and John Kerry. Both men today know very well that this breakthrough was itself a true sip from the “poison chalice” for many in Tehran and Washington.

When the nuclear deal was announced on July 14, 2015, there were many in Tehran who poured into the streets to celebrate. There were also those who denounced the whole new Iranian approach, reiterating what late founder of the Islamic Republic Ayatollah Ruhollah Khomeini used to say: “Until the US and Israel say, ‘There is no God but Allah,’ we won’t accept it.” It was mainly the hard-liners who were completely against the JCPOA — those on the very right of the political spectrum, well known in Iran as the “Hezbollahis.” They campaigned for their cause among the ranks of the regime who, during the negotiations, were very cautious not to make provocative statements that might reflect a sense of division within the establishment. It was mainly this collective consciousness that was pushing the majority of Iranian elites to build hopes of sanctions relief and economic prosperity, which at that political and diplomatic moment meant that all anti-deal voices should stay calm, no damaging comments were welcome and that pessimists should keep their thoughts to themselves.

“Nine months are enough for a pregnant lady to give birth, yet nine months weren’t enough for the nuclear deal to give us anything,” an Iranian official who spoke on condition of anonymity told Al-Monitor. “The US wants everything from Iran, and they aren’t ready to give anything. This is only helping the anti-US sentiment grow in Iran, not only among the Principlists and their camp, but even among those who used to push for normalization [of ties with the West].” The Iranian official specifically cited the latest ruling by the US Supreme Court to seize $2 billion of Iranian assets. Indeed, “[The ruling] provides a new standard clarifying that, if Iran owns certain assets, the victims of Iran-sponsored terrorist attacks will be permitted to execute against those assets,” said Justice Ruth Bader Ginsburg, who added, “applying laws implementing Congress' policy judgments, with fidelity to those judgments, is commonplace for the Judiciary.”

Among other US steps that have been seen as provocative by Iran were the changes to the Visa Waiver Program (VWP), which bars nationals of Iran, Iraq, Sudan and Syria, as well as nationals of VWP countries who have traveled to these countries in the past five years, from visa-free entry to the United States. Measures such as these are seen by Iran as discouraging businessmen who want to engage with Iran. The same applies to other steps, including the lingering banking limitations that are causing a delay in the return of around $55 billion worth of frozen Iranian assets. Yet Kerry told journalists after his most recent meeting with Zarif in New York, “There are now opportunities for foreign banks to do business with Iran,” adding, “Unfortunately, there seems to be some confusion among foreign banks, and we want to clarify that as much as we can." It’s yet unknown which steps are to be taken by Washington to clarify this “confusion.”

“If the US fails to abide by the deal and continues to deprive Iranians of their rights, then things might get out of control,” the Iranian official told Al-Monitor. “Iran, abiding by the [supreme] leader’s red lines, did its part of the deal — yet we haven’t seen anything serious in return. If this policy continues, then [it is] no surprise that one day this deal might fall, and then — given the failure in building trust — it’s going to be very difficult to reach a similar deal within a decade or two from now.” According to the Iranian official, “The only thing we can understand from what’s happening is that they want us deprived from our strength — not to make peace, but to launch a war while we are defenseless. This isn’t going to happen at any price.” The Iranian official was referring to the pressure that’s being exerted on Iran to give up its missile program, which is regarded by the US as a violation of UN Security Council resolution 2231, which was one of the results of the nuclear deal, but not a violation of the JCPOA itself.

All these moves have had a dire impact on the Iranian side, reviving memories from the 1940s and 1950s when the level of mistrust of the West reached its peak, especially during the last days in power of ousted Iranian Prime Minister Mohammad Mossadegh. It’s worth mentioning that the first anti-US slogans in Iran didn’t emerge after the country’s 1979 Islamic Revolution as many might think, but during the period between 1951 and 1953. According to Ervand Abrahamian, professor of history at Baruch College and author of “The Coup,” these slogans first emerged during the visit of US diplomat Averell Harriman who came to mediate between Iran and Britain in the wake of the nationalization of the Anglo-Iranian Oil Company. Such incidents multiplied long before the British-American-backed coup of 1953, which restored Mohammad Reza Pahlavi as Shah of Iran and ousted Mossadegh. Former US Ambassador to Iran Loy Henderson recalled in an interview with the Harry Truman library oral history program, “I received a telegram from our consulate in Esfahan stating that several thousand persons bearing Communist flags and shouting in Persian ‘Yankees, go home’ had been parading in front of the consulate.” A third incident was during demonstrations on July 16, 1952, which saw protesters chanting “down with Anglo-American imperialists,” among other slogans.

Today, Hezbollahis in Tehran continue to chant “Death to America” slogans and raise banners and posters depicting President Barack Obama as Shimr, the man who killed Hussein ibn Ali, the grandson of Prophet Muhammad and the third Shiite Imam. Such moves would usually stir criticism from among the ranks of Reformists and even pragmatic conservatives who back the JCPOA. Nevertheless, after all these months after the signing and implementation of the nuclear deal, it’s very unlikely to hear such voices. Instead, those who might have criticized anti-US provocations might these days themselves be reading Iranian writer Jalal Al-e Ahmad’s 1962 bestseller “Gharbzadegi” (West-toxication), a book seen as the mother of anti-Western discourse and sentiments in Iran, or in other words — anti-West 101.