Who is really inciting violence in Israel-Palestine conflict?

Deputy Palestinian Information Minister Mohammed Khalifa tells Al-Monitor that, while Israel blames them for incitement, right-wing Israelis are responsible for the violence. 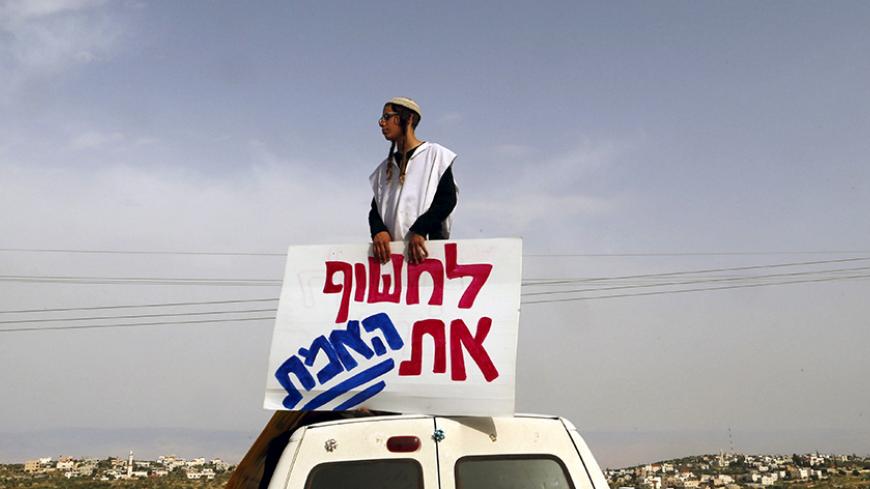 An Israeli right-wing activist takes part in a protest calling for the release of suspected Jewish attackers, who were arrested by Israel over a July arson attack on a Palestinian home that killed a toddler and his parents, outside the West Bank village of Duma near Nablus, April 5, 2016. The Hebrew script reads, "Reveal the Truth". - REUTERS/Ammar Awad

The Palestinian Information Ministry in Ramallah has in recent months been compiling materials it claims are proof that the Israeli media incites hatred against Palestinians in general and Palestinian President Mahmoud Abbas in particular.

Many West Bank Palestinians share the feeling that Israel is conducting unbridled incitement, even though some of this is based on reports that were never published in the Israeli media or were misleadingly interpreted. Now many of these allegedly hatred-inciting reports are being bound in a thick file that is being updated daily since the current wave of terrorism began in October 2015.

The so-called “incitement file,” prepared by the Palestinian Ministry of Information, currently comprises about 270 pages of newspaper clippings (including ultra-Orthodox Jewish newspapers such as Yated Ne’eman and Hamodia, to which most Israelis are never exposed) and transcripts of news reports aired on major Israeli television channels.

“You accuse us of incitement, but you would do well to put your house in order,” Deputy Information Minister Mohammed Khalifa told Al-Monitor. Despite the ministry’s tight budget, the issue is too important to be ignored. Thus, two Hebrew-speaking researchers have been hired by the ministry to analyze Israeli media stories that prove, in their view, the extent to which the reports distort reality and incite distrust and animosity against the Palestinians.

“Show me one news item published in Israel that reports on Abbas' efforts to quell incitement and on our media restraint in refraining from encouragement of terror attacks. What you’ll find in the Israeli media are the same slogans, over and over, recited by [Prime Minister] Benjamin Netanyahu who incites against us. The Israeli media quotes his comments without checking,” Khalifa says.

“On our station you won’t find a single word of incitement, nor on other stations,” the manager of the popular al-Huriyah (Freedom) radio station in Ramallah, Majdi Arbid, told Al-Monitor. “Support for an end to the occupation, yes, but not violence and not encouragement of terror attacks against you. On the contrary, we appeal to the youth and implore them not to do stupid things because their lives are important.”

According to Arbid, Abbas has urged the Palestinian media to act responsibly — and it does. “President Abbas doesn’t want violence, but the Israeli media incites [animosity] against us and presents a distorted reality as if marginal radical voices represent the Palestinian mainstream or Abbas' views. There’s no mention in your reporting of the war against incitement being waged by the Palestinian Authority,” he says angrily.

Reading through the “incitement file” prepared by the Palestinians poses some difficulty. As an Israeli journalist, I found it difficult to understand why the PA regarded certain reports as incitement. For instance, opinion pieces or quotes and interviews with right-wing activists — the Palestinians view these as incitement despite the fact that they do not represent the Israeli media. These reports are often accompanied by sharp [Israeli] criticism against the activity of the right.

In the incitement file, I found a plethora of reports about the famous wedding video clip in which right-wing activists are seen dancing at a wedding and stabbing with a knife a photo of Ali Dawabshe, the baby who was burned to death in an arson attack on his home in the [West Bank] village of Douma. The video shocked most Israelis and led to the arrest of the rejoicing groom and some of his guests, but for the Palestinians the very report about the incident is regarded as wild incitement against them.

Thus, for example, is the commentary that compared “our crazies and their crazies.” Commentator Yoaz Hendel wrote in Israeli daily Yedioth Ahronoth, “There’s no difference between them [the people of the radical rights] and the crazy Muslims around us.” Arbid explains that “generalizations by the Israeli media drive the Palestinians crazy.”

Another item in the incitement file is an editorial written by Reuven Berko in the daily Yisrael Hayom about global jihadi terror attacks in Europe. “There’s no chief magician running global Islamic terrorism. This is a four-stage global production of the Islamic Prophet’s legacy,” Berko wrote. “Is this not incitement?” ask the researchers of the Palestinian Information Ministry.

During my April 14 conversation with the manager of the Ramallah radio station, Israeli media sites reported that right-wing radical activists Michael Ben-Ari and Baruch Marzel had set fire to a Palestinian flag near the gate of the Defense Ministry in Tel Aviv. The prominently displayed item was accompanied by a video clip showing right-wing activists “celebrating” alongside a burning Palestinian flag with not an Israeli police or soldier in sight.

“How do you feel when an Israeli flag is burned at a Hamas or Islamic Jihad demonstration?” asked Arbid. “Would you air such photos as a news item or censor them? And what would you say about Abbas who failed to stop them?”

Another news story in the incitement file deals with the issue of Palestinian bereavement in light of the controversial comments made by radio host Razi Barkai in which he allegedly equated Israeli and Palestinian bereavement. And this is how Middle East scholar Mordechai Kedar was quoted in Yisrael Hayom: “The shahids [martyrs] are not by way of being dead … this apparently strange logic is based on the belief that the shahid is already in paradise, running around with the 72 virgins, and that’s why he’s sweating … transferring the sweat [of the shahid] to them [the funeral participants] is their last opportunity to take part in these events in the ‘paradise’ of the shahid.” That same article also mentioned that Palestinian television supposedly praised the shahids.

“You’re confused,” said Khalifa. “What you portray as Palestinian television is actually Hamas television. Are you not aware of the fact that there was a revolution in Gaza, and that the West Bank is different from Gaza? Are you unaware of the fact that in Ramallah there’s a Palestinian president putting out his hand in peace, whereas Gaza is ruled by Hamas that kicked Fatah out at gunpoint?”

“Why can’t you understand that we grieve for our despairing young who choose death in desperation?” Arbid asks. “We bemoan our fate and feel the pain of our young. This is not incitement. This is grim reality.”

In summing up, it would appear that each side — the Israeli and the Palestinian — only sees the flaws of the other.