Hate of Israeli Arabs has reached a peak with the murder of Mohammed Abu Khdeir, 16, reflecting the tolerance of Israeli society toward words and deeds of extreme-right activists. 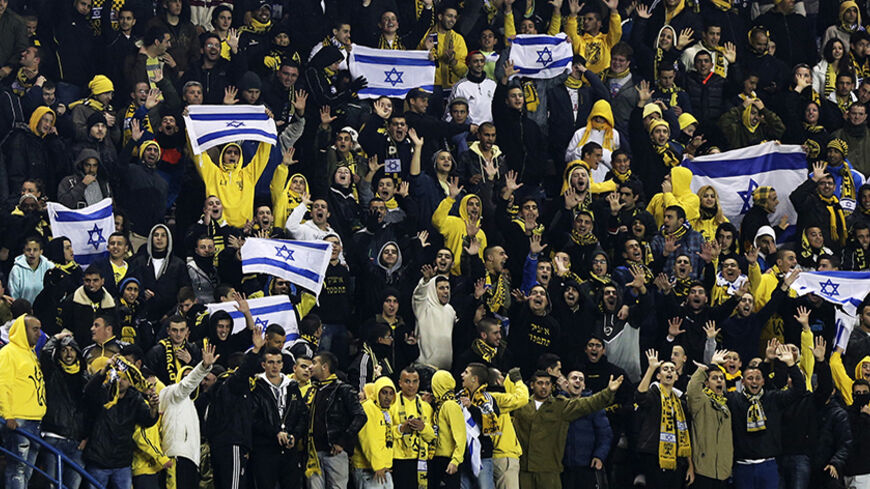 Supporters of Beitar Jerusalem cheer for their team during a soccer match against Maccabi Umm el-Fahm at Teddy Stadium in Jerusalem, Jan. 29, 2013. - REUTERS/Mohamad Torokman

Twenty-four hours after the charred body of Mohammed Abu Khdeir, 16, was discovered on July 3, President-elect Reuven Rivlin paid a condolence visit to the Shaer family, whose son Gil-Ad was abducted and murdered by terrorists. When asked by journalists about the voices calling for revenge against Arabs and the wave of incitement and racism on the social networks, Rivlin responded with an analogy from the sphere of soccer. He said that when racist cries emerge from the eastern gallery of the Teddy Stadium, it's befitting that the fans from the western gallery should admonish them. “I always thought that the western gallery is no less guilty than the eastern one. Even if it is horrified inside, that’s not enough.”

It's doubtful whether Rivlin knew at that moment that the police were already on the heels of the suspects, who are believed to be members of an extremist Jewish organization in Jerusalem. The organization’s activists and inciters are part of that infamous eastern gallery.

Every Arab soccer player who played in Teddy (Jerusalem’s soccer stadium that occasionally hosts the games of Israel’s top teams) was the target of a string of curses and invectives from the fans in the “eastern gallery,” only because he was an Arab.

Cries of “Death to the Arabs” are a routine part of soccer matches in Teddy. Each time, after politicians mouth feeble objections, things revert back to normal until the next match with its series of curses and incitement. Nothing significant is ever done. Official Israel treats the hatred of Arabs expressed by growing numbers of groups in Jerusalem as an almost unavoidable phenomenon. It is regarded as an inappropriate but not really dangerous one.

Evidently there were those who were sure that the distance between words and acts is very great, and that there is no rush to adopt the means to fight the phenomenon. The motto of the racist activists and their various organizations is fanatical hatred of Arabs. But they have not been placed outside the law; on the contrary, their leaders have continued with their daily routine. Most of them were not investigated or indicted for incitement, and no one imposed administrative detention on them or severed them from their sources of influence.

One of the “sources of inspiration” for the far-right Jewish movements is Michael Ben Ari, a former Knesset member of the Ichud Leumi Party. Ben Ari now heads the Otzma LeYisrael movement that did not garner enough votes to pass the electoral threshold in the 2013 elections. Ben Ari and other movement activists are working energetically to disseminate their worldview, based on Kach movement ideology. Ben Ari was one of its activists.

In 1994, the Kach movement was declared a terrorist organization by Israel. It is included in the list of terror organizations of the United States, the European Union and other countries. But its holdovers — including Ben Ari, Baruch Marzel, Itamar Ben Gvir and others — continue to recruit adherents for the same goal: the expulsion of all the Arabs from the territories of ''the land of Israel.''

In their eyes, all means are acceptable to recruit more and more supporters and fans. On July 1, Ben Ari posted the following status on his Facebook page: “Riots in Jerusalem: The situation has deteriorated in the recent hour after minority youths attacked Egged’s bus line No. 1 that transported a large number of passengers to the Western Wall. A nearby Border Police force intervened but was harshly attacked by scores of minority members.” Ben Ari attached to his report harsh photos of violence, and asked his thousands of Facebook followers to disseminate them.

The problem is that nothing of the kind had taken place. The fallacious report used 4-year-old photos from a demonstration in East Jerusalem after houses had been demolished in Jerusalem’s Arab neighborhoods. There was also a photo of a bleeding casualty of an Israeli bus that capsized in 2003.

These old photos and the fallacious report received more than 3,800 ''likes'' and more than 2,100 ''shares.'' This served to heat up the already charged atmosphere that held sway on the heels of the murder of the three boys: Gil-Ad Shaer, Naftali Frenkel and Eyal Yifrach. The responders acted ''in kind'' with a gamut of curses and recommendations on how to harm Arabs, including shooting, burning, slaughtering, etc.

The falsehood was exposed the next day, and Ben Ari corrected his Facebook status and argued in his defense that “I received the information and photos from a news and current events center, with your permission I won't go into details; this center was also misled. This morning it emerged that the photos are old, but there’s nothing new under the sun. In [the Arab neighborhood of] Beit Hanina, the heart of Jerusalem, are difficult scenes of rocks being thrown at policemen …”

Another example: On June 30, Ben Ari wrote, “Jews—Revenge!!” and attached a picture that was written (he claims) with the blood of those slaughtered in the Holocaust, “Juden Revenge.” In addition, Ben Ari invited his friends to a lesson on the topic, “the meaning of revenge.”

The next day, the day of the funerals of the abducted boys, Ben Ari arrived in Jerusalem and was carried on the shoulders of the demonstrators. There, too (and simultaneously on Facebook), he egged them on to revenge and they responded by calling for “Death to the Arabs.” Afterward, dozens of extremist right-wing activists emerged from the demonstrators to the streets of Jerusalem, to “hunt” Arabs and beat them up.

Ben Ari was not investigated by the police on suspicion of incitement, even though incitement against Arabs is his daily bread and his speeches and publications are open to the entire public. If police investigators would only open the Facebook pages of Ben Ari and the fans who follow him, fans who respond with their own aroused cries to every inflamed status of his, the police would not have to work hard to indict him for incitement.

The next day, Abu Khdeir was brutally murdered by activists of the radical right. It was not an especially difficult mission to capture the six suspects, some of whom are minors. According to video footage distributed by a Palestinian site, two youngsters were recorded on security cameras placed in the neighborhood of Shuafat. They supposedly approached Abu Khdeir late at night, and started talking to him. According to his father, the security footage shows also the faces of the youngsters and the license plate of their car.

Palestinian Attorney-General Muhammad Abd al-Ghani Uweili, who was present at the autopsy of Abu Khdeir's body, told the Palestinian news agency Maan that the findings point to the fact that the boy was burned alive. Flammable material was detected in his respiratory channels and 90% of his body was covered with severe burns.

It's impossible to describe the intensity of the incitement absorbed by these youthful murderers, some of whom are younger than 17, which led them to burn alive the Arab youth. How much poison was inserted into their brains until they stopped seeing the Arab as a human being? And how did all this fall under the radar of the Shin Bet and the police?

But this is not the end of the affair. Law enforcement agents must conduct now a thorough examination and reach the generators of incitement and activists of the radical Jewish organizations. And the sooner the better.

Attorney Itamar Ben Gvir, a radical right-wing activist and former parliamentary assistant to Ben Ari, became famous in his youth for gaining access to Prime Minister Yitzhak Rabin’s car and holding its logo. “We got to Rabin's car, next we'll get to him,” Ben Gvir said at the time. Ben Gvir was summoned at an investigation and released without being indicted; nothing was done regarding the wild incitement. Two months later, Rabin was assassinated (1995).

Right-wing activists of that era, and additional incited supporters who joined them, are working untiringly now to fulfill the Kach movement’s ideology. As aforesaid, this movement has been illegal for 20 years.

The inciters and activists operate freely and openly. It would not be difficult to arrest them and declare the current organizations to be illegal. It is our obligation to do this, to avert the next hate murder.