How Israeli far right uses news as a tool of incitement

As Prime Minister Benjamin Netanyahu condemns Palestinian incitement, he should be careful about far right news sites depicting a false picture of the reality, damaging the already fragile relationship between Jews and Palestinians in Israel. 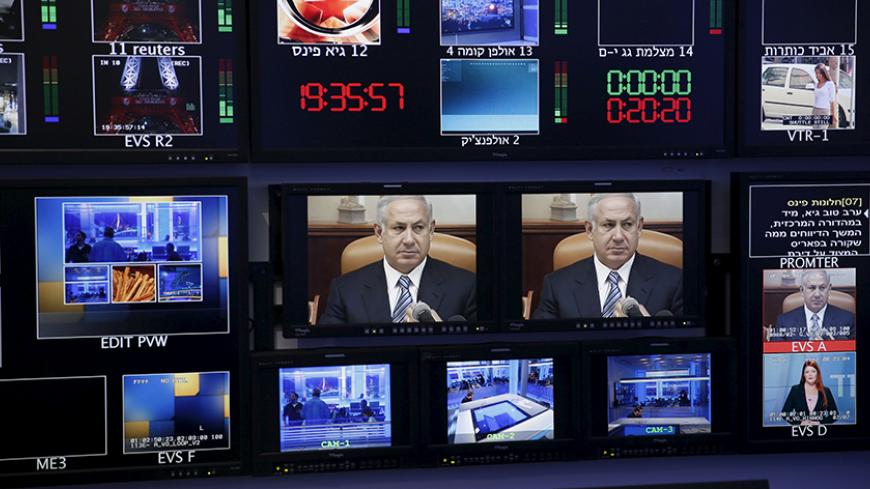 In Israel, particularly among political leaders, it is not uncommon to suggest that Palestinian incitement is the root cause of the recent spate of terrorism. Prime Minister Benjamin Netanyahu — like some of his Cabinet ministers — holds President Mahmoud Abbas chiefly responsible for incitement in the Palestinian Authority (PA). Before his meeting with US Secretary of State John Kerry in Berlin on Oct. 22, Netanyahu said, “There is no question this wave of attacks is driven directly by incitement; incitement by Hamas, incitement from the Islamist movement in Israel and incitement, I am sorry to say, from President Abbas and the Palestinian Authority.” Indeed, Hamas’ Al-Aqsa television network and Palestinian radio stations in the West Bank, particularly in Hebron, exercise no restraint in portraying Israelis mendaciously and perversely, occasionally fabricating events that never took place.

Established in 1998 by Yigal Carmon, the Middle East Media Research Institute has for years been monitoring the Palestinian and Arab media. One of its stated goals is to provide the Israeli public with information about certain phenomena in the media, especially the electronic one. The information is then uploaded onto YouTube and distributed to Israeli news outlets so they would in turn report how Israelis are being portrayed in news reports in the Arab media in general and the Palestinian one in particular. The material disseminated by the institute oftentimes features Muslim clerics characterizing the nature of Jews. In children-oriented programs, the children — mainly Palestinian ones — are imbued with messages of jihad and adoration for the shahid (martyr). Tendentiously directed clips depict the supposedly evil Jew, and so on and so forth.

Yet, incitement is not confined exclusively to the PA or the Arab media. It can also be found in Israel’s extreme-right, non-mainstream “news” websites. Many such news websites have been recently launched after declaring that they are fed up with the “leftist” Israeli media. They seek (so they claim) to offer an alternative to other news information distributing outlets. Paradoxically, those extreme right-wing sites also despise the settlers’ own news site: Arutz 7. They are trying to propose an alternative, which would be more suitable, so they argue, to the spirit of nowadays.

The declared goal of one such website, JTF News, is to convince its readers and prove to them that all of Israel’s right-wing parties have sold out. The website’s logo instantly clarifies whom you are dealing with: a clenched fist, reminiscent of the logo of the outlawed Kach movement.

The vitriolic arrows are aimed at Arabs in general and Palestinians in particular but also at the “Israeli left.” One of the articles on the website holds Israeli left-wing activists, who had vigorously pushed for a European boycott, responsible for the EU decision on Nov. 11 to label products from the settlements. “The voice is the voice of Europe but the hands are the hands of the Israeli left,” the article asserts (alluding to the biblical story about Jacob and Esau in the Book of Genesis).

Another right-wing Israeli news website, which can only be defined as the most noxious and inciting one, appears under a spurious misnomer: Newsdesk Israel. A glossy website, it spreads its “teachings” on social media. Its operators say they work voluntarily and have no investors or sponsors, nor do they have any specific political agenda. All they want is to present an unbiased picture.

In times of escalating tension between Jews and Arabs, the material of Newsdesk Israel floods the Internet, “exposing” many viewers to reports or video clips to which they cannot remain indifferent. By and large, those reports and clips can be deemed sheer incitement. Sometimes they are based on true events that can be interpreted differently, but on other occasions those are outright false reports that the unsuspecting Israeli reader has no way of verifying.

In the wake of the Nov. 13 terror attacks in Paris, Newsdesk Israel posted a doctored video clip titled “Watch, Ramallah: Palestinians celebrating Paris attacks.” The footage shows thousands of Palestinians celebrating with a display of fireworks as a backdrop. Cheerful men are seen holding trays of baklava pastries that are being served to those “rooting for the Paris attacks.” But the photos were not taken after the Paris attacks. That was a collage of several events photographed in recent years in the territories. The 28-second clip consisted of photos previously taken in the Palestinian cities of Gaza, Ramallah and Bethlehem. Some of those old photos were taken at al-Manara Square in Ramallah showing Palestinians celebrating the induction of the PA into UN institutions. Other photos were taken in Gaza during Operation Protective Edge in the summer of 2014 in which Palestinians were seen cheering upon hearing false rumors that the Hamas Izz ad-Din al-Qassam Brigades had captured Israeli soldiers. The Israeli readers were asked to share those photos mainly with their French friends so as to show them and help them understand what “the Palestinians’ true colors” really are.

But Palestinians are not the only ones in the crosshairs of this “Israeli news site.” Under the heading “A phenomenon,” Newsdesk Israel told its readers that Israeli Muslim Arabs were blasting their car stereos with Islamic State songs while driving through Arab towns and villages. The site ascribed the report to a so-called statement made by Father Gabriel Naddaf, whom it touted as “the spiritual leader of Christians in Israel.” The report stated that the “spiritual leader” had related that “this is a phenomenon showing increasing danger from Arab Israelis who espouse the ideology of global jihad and see IS doctrine as a way of fulfilling their vision of establishing an Islamic caliphate.”

Al-Monitor contacted Naddaf, a resident of Yafa an-Naseriyye (an Arab local council in the Lower Galilee), to confirm that he had made a statement to that effect, but he replied that he could only be interviewed over the weekend. When Al-Monitor contacted him again and said that the article would appear the following day, Naddaf would no longer take its calls.

Wadia Abu Nasser, the executive director of the Assembly of Catholic Bishops in the Holy Land, told Al-Monitor that Naddaf is far from being the spiritual leader of Christians in Israel. “First of all, he is not a bishop. He is an Orthodox priest, and they are a minority among the Christians living in Israel,” he observed. “Most Christians in Israel are Catholic, which is why he cannot be a religious leader. He holds a very junior rank in the church and is barely the leader of a small community in Yafa that has splintered and where the majority of the people do not attend the church where Naddaf is active.”

In an atmosphere of escalation and justified concern by Israelis over possible terror attacks, incitement under the guise of news does not fall on deaf ears. Meanwhile, nobody has issued a word of caution about overt incitement in Israel nor does anyone see this to be a disconcerting sign of what the future might hold.