Will reports of hospital segregation spark debate on racism in Israel?

The scandal on the segregation of Jewish women and Arab women in Israeli hospitals has succeeded in breaking the long-held public silence on racism and discrimination. 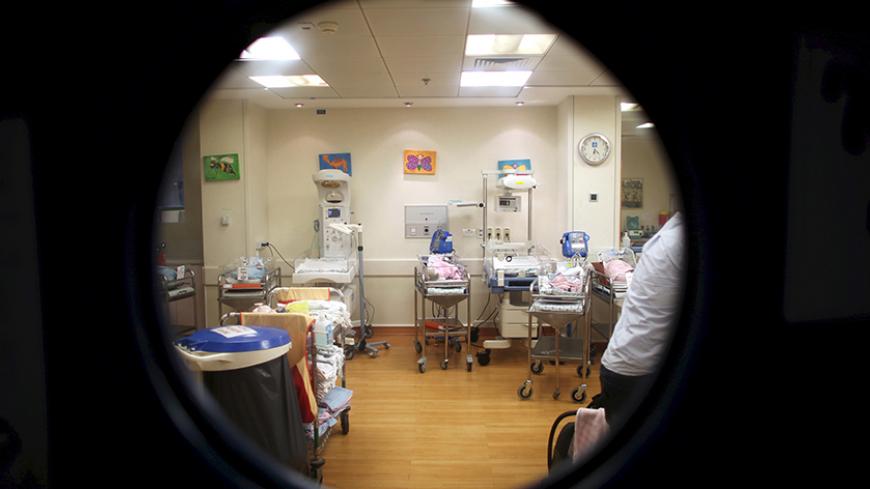 Cribs for newborn babies are seen through a window at a hospital nursery in Jerusalem, Sept. 10, 2015. - REUTERS/Ronen Zvulun

The poem by German Lutheran theologian Martin Niemoller, “First they came …,” is often quoted in recent times by Israeli left-wing and human rights activists. They adopted the poem about the cowardice of German intellectuals who failed to speak up against the Nazis to describe the silent majority in the bitter war of cultures being waged in Israel. Following the vicious ''mole'' campaign by the right-wing Im Tirtzu organization and the accusations of treason against activists and supporters of the Breaking the Silence and B’Tselem human rights groups, Niemoller’s protest, written more than 70 years ago, has become a modern-day anthem of those persecuted for protesting the silence of the majority.

Niemoller, who fought courageously against the Nazi regime in Germany, listed all the silent segments of society: Protestants, Catholics and trade unionists who thought they would never be targeted. He continued, “Then they came for me — and there was no one left to speak for me.” This week, too, these words were quoted in the context of Israel’s latest public uproar.

An April 5 expose on Israel Radio revealed that some hospitals separate Jewish women and Arab women in maternity wards. Knesset member Bezalel Smotrich of HaBayit HaYehudi took to Twitter to express support for the segregation. He wrote, “My wife is totally not a racist, but after giving birth, she wants to rest without the mass celebrations that are traditional in Arab families.”

His wife, Revital, told a Channel 10 television interviewer that during one of her births she asked the hospital administration to replace the Arab obstetrician with a Jewish one so that Arab hands would not touch the newborn. “The moment that the infant enters the world is sacred and pure. It is a Jewish moment, and I would be very happy if Jewish hands were the first to touch my child,” she said, further stirring the cauldron. It suddenly became clear that segregation between Jews and Arabs was not simply a routine occurrence — it also enjoys the support of various groups.

But why was this particular instance — of separation between new mothers — greeted with such shock, more so than separation of Jews from Arabs in other places in Israel and the territories, which is normally accepted with indifference?

No one spoke out when wide, new roads paved in the West Bank were reserved for Jewish settlers, while Arabs were absolutely prohibited from using them. The Palestinians dub these thoroughfares “apartheid roads.” As evidence, five years ago on a news assignment I was driving on Route 557 leading to the settlements of Itamar and Elon Moreh with a Palestinian passenger from the nearby village of Burin by my side in the car. Settlers in the area who spotted a Palestinian passenger in the car of a Jewish driver were quick to alert the army and police so they could arrest the Arab who dared use the road reserved for settlers, in violation of the ban. The argument of the defense authorities at the time was that the decision to pave separate roads stemmed from security considerations.

“Security considerations” was also the explanation provided by Defense Minister Moshe Ya'alon — who is now being targeted by the radical right for criticizing the Israeli soldier who shot dead a Palestinian in Hebron — when he caved in to settler pressure and ordered that Jews and Arabs be segregated on bus lines in the territories. The instructions, which were also endorsed by Prime Minister Benjamin Netanyahu, were not carried out — not because of the silent majority that did not raise its voice, but as a result of international media attention that included prolific use of the word “apartheid.” A year has gone by, the buses remain mixed, and lo and behold they don’t pose a security threat.

There are numerous other examples of this type of discrimination in everyday life in Israel. The former mayor of Nazareth Illit, Shimon Gapso, tried all sorts of methods to make life hard for the non-Jews living in his town. He was strenuously opposed to opening schools for Arab students, even though more than 20% of the town’s residents are Arabs. Gapso’s explanation back then was that “the city of Nazareth Illit was established in order to create a Jewish majority in the Galilee … the residents, and I at their head, are staunchly supportive of the principle that Nazareth Illit must retain this role.”

Arabs are discriminated against in hiring, Jews refuse to rent apartments to Arabs, and prior to the 2015 elections, Netanyahu even urged right-wing supporters to get out and vote because “the Arabs are moving in droves to the polling stations.” Separation and racism have become a fact of life in Israel and is being nurtured by senior decision-makers including Netanyahu and the right-wing ministers in his government. Even the centrist former finance minister, Yair Lapid from Yesh Atid, was not immune. After being elected to the Knesset in 2013, he said that he would not sit on the opposition benches with “Zoabis” — using the name of Arab Knesset member Haneen Zoabi to refer to all Arab politicians, a sobriquet for which he subsequently apologized.

But it was only this time that the Israeli public was shocked. In a spontaneous outpouring of anger against the comments by the Smotriches and the expose about segregation in hospitals, women have been posting photos of Arab mothers and Jewish mothers together, thrilled with their babies. All those who kept mum about segregation in other places suddenly found their voice. Journalist Hanoch Daum, who describes himself as a dyed-in-the-wool right-winger, wrote a reaction to Smotrich, admitting that he had voted for his HaBayit HaYehudi party, but criticized his remarks: “One of the sweetest memories I have from the birth of my son Yehuda, way back 17 years ago, is standing and biting my nails at the Misgav Ladach hospital, along with an Arab from [the Jerusalem Arab neighborhood of] Beit Safafa, the two of us spending a long night in expectation of our first born … it was so universal and wonderful. And that’s what’s sad about your remarks. Not only do they reek of racism, you are also missing out on something far deeper: If there’s hope in the place where we live, it’s visible there, in the delivery room. There are no Jews and Arabs there. There’s only father and mother and a new life coming into this world — a piece of sanity in a bitter world.”

Too bad that many of those who were outraged at the racism in the maternity wards forget that there are also people outside the hospitals — Jews and Arabs — seeking hope and sanity. Too bad that they forget how easy it is to speak out against segregation in hospitals, but how easier it is, apparently, to accept the reality of separation and discrimination in other areas of life in Israel without speaking out.