Will Israel limit the power of its own Supreme Court?

The duel between Israel's Justice Minister Ayelet Shaked and Supreme Court President Miriam Naor over the gas outline ruling reflects the battle within Israeli society between radical forces and those protecting liberal values. 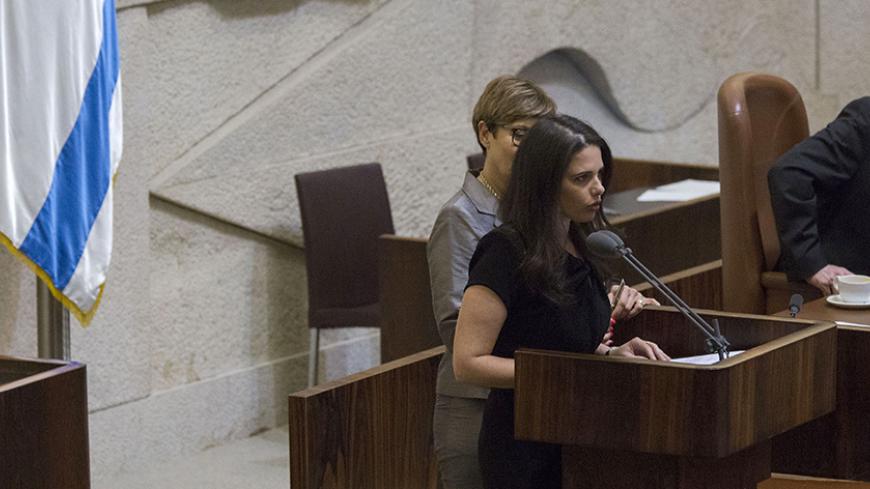 Ayelet Shaked, Israel's justice minister, speaks as she is sworn into Israel's 34th government during a parliament session in Jerusalem, May 14, 2015. - JIM HOLLANDER/AFP/Getty Images

For decades, the reputation of Israel’s legal system has been a beacon of light for Israel’s democracy. The country’s Supreme Court has earned itself considerable international prestige, even in places where Israel itself is disparaged and maligned on a daily basis. The independence of the Israeli legal system has been maintained meticulously since the founding of the state in 1948, and the ultimate authority of the law is a supreme value, even if the country has been ripped asunder over the past few years in a clash of cultures and values, which threatens all of the above.

Though the Israeli right has long called for placing a limit on the power of the Supreme Court and allowing the country’s elected officials to rule, never before have these calls been so vociferous and so dangerous. This was evident in an impassioned clash that erupted during the opening session of the Israeli Bar Association’s annual conference in Eilat on April 4.

Raising the banner of revolt was Israel’s young Justice Minister Ayelet Shaked, Naftali Bennett’s partner in the leadership of HaBayit HaYehudi. In her inaugural speech to the conference, Shaked focused on the Supreme Court decision March 27 that led to the delay of the deal that Israel signed with the firms operating Israel’s offshore gas fields, including the large US corporation Noble Energy (for distribution of resources and benefits).

“A judicial body that has no responsibility for filling the [country’s] coffers is the one that allows itself to empty them,” she said. “This is yet another example of [the court] exerting its authority, but bearing no responsibility for it. The court has once again become a place for adjudication of purely political and macroeconomic questions.” Surprisingly, Shaked’s speech received thunderous applause from the hundreds of lawyers and top Israeli legal figures who were present in the hall.

Issues surrounding the reserves of natural gas, which has been found in abundance off the Israeli coast, are tearing the Israeli public apart and dividing them into two hawkish camps. As a result, the government has so far been unable to reach a deal with the gas field operators. Netanyahu has no Knesset majority for that, and the Supreme Court’s decision put a serious hold on his most recent decision. Also hanging in the balance are the gas field operators themselves, who include Israeli tycoons and an American company facing financial difficulties. “I hope that we won’t turn — in the eyes of the world — into a country that eats its investors,” Shaked said to the audience’s applause.

Chief Justice of the Supreme Court Miriam Naor delivered her remarks immediately after Shaked. “One would expect the Bar Association and its members to oppose any attempt to impugn the democratic structure of the state, its independent judiciary, the authority of the Supreme Court or of the Committee to Select Judges,” she said.

This public duel between the minister of justice, representing the elected leadership, and the chief justice, representing the legal system, was not the first time these two women clashed. It did, however, take the struggle over the very nature of the State of Israel — which was originally founded as a liberal, humanistic, tolerant state of law — to a whole new level.

The right, which has ruled Israel for a generation, is becoming more extreme in its positions, and dragging the entire system with it. Laws to limit the power of the Supreme Court have been stacking up in the Knesset, while many other attempts to limit its power have been made by politicians of various stripes in an effort to win more votes. The left regards this phenomenon as a real danger to Israeli democracy as we know it. If a law eventually allows the Knesset to circumvent Supreme Court rulings — as advocated by some right-wing politicians — the original Israel that we once knew would cease to exist.

Later at the Eilat conference, Tzipi Livni, the previous minister of justice, delivered her address. It is worth noting that Livni is considered the foremost defender of the Supreme Court’s status and independence. She said, “[Minister of Justice] Shaked drew a sword and plunged it into the court.” Another public media skirmish between Livni and Shaked erupted that evening, with Prime Minister Benjamin Netanyahu and Minister Bennett rushing to Shaked’s defense. Netanyahu even declared, “No institution is immune to criticism.”

The left regards these statements as more gnawing away at the stature and independence of the Israeli Supreme Court, which is bunkering down in its vast marble edifice in Jerusalem as it gradually becomes the last holdout of the old Israel. It is a desperate battle, being fought practically in vain. The Israeli masses vote right. They are fed up with the old order in a way reminiscent of the Donald Trump phenomenon in the United States. The most recent victims of these battles include people who were once part of the consensus, like Minister of Defense Moshe Ya'alon or Chief of Staff Gadi Eizenkot. They have come under attack because of the public’s emotional support for the soldier who allegedly executed a wounded Palestinian terrorist. There is no such thing as “politically correct” anymore. The “rule of law” receives no more lip service. This is a new era: violent, impassioned and unknown.

As if it couldn’t get even more chaotic, on April 5, the most right-wing member of Knesset, a settler named Bezalel Smotrich (HaBayit HaYehudi), popped up with the assertion that he understands Jewish women giving birth who refuse to be in the same hospital room as Arab mothers. Smotrich wasn’t referring to Palestinian women either. He was talking about Israeli Arab women who are citizens with equal rights in the Jewish state. Smotrich’s wife, Revital, who was interviewed immediately after him by the Army Radio, said that during each of her five births, she refused to be treated by Arab obstetricians, because “the moment that the infant enters the world is sacred and pure. It is a Jewish moment, and I would be very happy if Jewish hands were the first to touch my child.”

A veritable world war erupted in the media following those remarks. Once again, liberal Israelis found themselves confronted with a new wave of despicable racism and xenophobia of the worst kind. “There has been a 100-year war here between Arabs and Jews,” Smotrich tweeted. “I think it is natural that my wife would not want to lie [in the hospital] next to another woman who just gave birth to a baby that in 20 years might want to murder my wife's baby.”

Many think that Smotrich is the very personification of the kind of Jewish extremism that thrives and flourishes on the hills of Judea and Samaria. He is the fulfillment of what philosopher and professor Yeshayahu Leibowitz raged about prophetically in 1982, when he warned against the rise of a new race of “Judeo-Nazis.” The problem is that in the past, people like Smotrich had to hide and keep their opinions to themselves. Now, however, they feel confident enough to express their opinions loud and proud. They can even serve as legislators in the Israeli Knesset.