Will Sisi fulfill his 'Sinai promise'?

Egyptian President Abdel Fattah al-Sisi has promised that a new development project will eliminate terrorism and revive the economy in the Sinai Peninsula, but past failures raise doubts about its effective implementation. 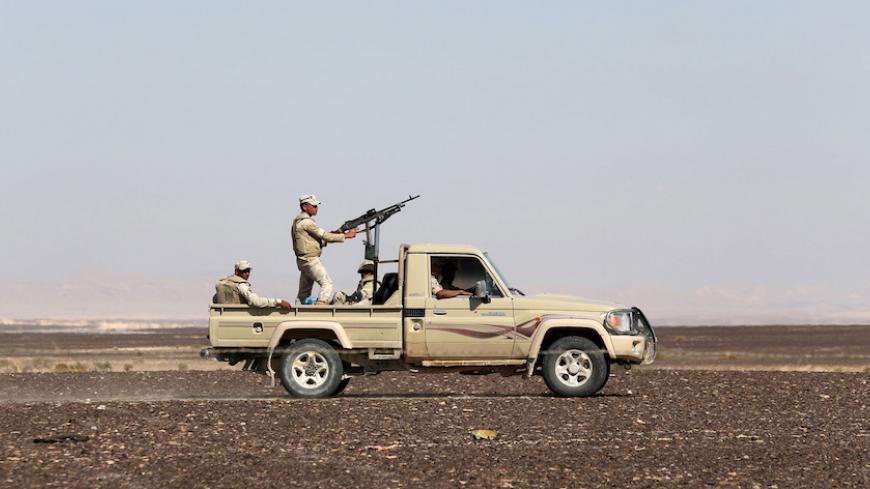 In an on-air call last month with Amr Adeeb on the Al Qahera Al Youm channel, Egyptian President Abdel Fattah al-Sisi declared his plan to complete the building of an integrated urban community in the Sinai Peninsula within the next year and a half.

“I have allocated 10 billion Egyptian pounds [$1.1 billion] to develop Sinai. There is no room for trifling, neither with ourselves nor with the Egyptian people. Eighteen months from now, you and the Egyptian people will see a fully developed area in Sinai, starting with a creation of a 1,500-kilometer [930-mile] network of roads and bridges, the development of main axes and the building of Bedouin compounds, each comprising 150 houses and 500 agricultural acres. We aim to create an integrated urban community for our children, whether in the north or the south,” Sisi told Adeeb March 7.

He added, “You do not have enough information on what is happening in Sinai. We are making concerted efforts and I am not providing empty rhetoric — and people are well aware of that. Heed my words, Egyptians, what I am telling you is the truth. In a year and a half [the project] will be implemented without one day of delay. I am capable of doing so, God willing.”

Sisi’s announcement of the series of mega projects, which the country is currently implementing in Sinai, came following the scathing comments against the state’s institutions for what some have called obvious “neglect” vis-a-vis the Sinai issue, compounding the lack of actual development in the area in recent decades. This was particularly true under the rule of President Hosni Mubarak, despite officials’ countless statements about development plans, demolishing of tunnels with Gaza, elimination of corruption and ways to take advantage of the treasures and wealth of Sinai.

On Oct. 13, 1994, the government approved a comprehensive plan to implement a project dubbed the National Project for the Development of Sinai, at a cost of 110.6 billion Egyptian pounds (roughly $33 billion at the official exchange rate then), of which 64 billion pounds were to be allocated to the north and 46.6 billion pounds to the south.

It was considered one of the mega national projects to be implemented by the Ministry of Water Resources and Irrigation, with the aim of strengthening and consolidating Egypt’s agricultural policy by increasing the area of cultivated lands and agricultural production, conducting a redistribution of population and resettlement of citizens in the desert of Egypt, connecting Sinai to the East Delta area, transforming it into a natural extension of the Nile Valley so as to introduce a new agricultural map for Egypt in the 21st century. However, this project has yet to see the light of day.

In 2012, then-Prime Minister Kamal Ganzouri issued a decree regarding the formation of the national mechanism for the development of the Sinai Peninsula with an estimated budget of 3.4 billion Egyptian pounds (roughly $563 million at the exchange rate at the time) on a yearly basis to replace the old national project for the development of Sinai, to bring about real development on the ground. These endeavors, however, were not welcomed by Sinai citizens and observers and thus nothing was achieved on the ground.

For his part, Salah al-Balagh, a board member of the national mechanism for the development of the Sinai Peninsula, told Al-Monitor that the establishment of the national company is the first step in the right direction to build an integrated urban community in Sinai. The company will rely on direct investment, according to him, unlike the previous bodies and councils that failed to achieve anything in terms of development in Sinai and squandered public money.

“There has been a political will to develop Sinai since the 1990s. Projects had been well planned but execution on the ground was a failure every time. This is because we lack expertise and efficiency in administration, whether at the level of the government or the parties in charge of implementing these projects. The government unfortunately decided to establish the national mechanism with certain financial allocations but had stripped it of all powers. The head of the mechanism is a deputy minister, and thus the minister has bigger powers, which would hinder any decision-making and any real development measures on the ground,” he said.

He added, “The mechanism ought to be directly affiliated with the president instead of the minister or the council of ministers, if we truly seek reform. As for the parties in charge of the projects, there were no clear procedures as to the selection of effective members or entities capable of achieving development.”

Balagh strongly criticized the fact that 10 billion pounds only were allocated to the implementation of the national projects in Sinai to fix what had been destroyed by previous regimes.

“Ten billion pounds is a paltry sum for development. In 1994, the government had allocated 110 billion pounds, so how could it, after more than two decades, allocate a much smaller amount?” he asked.

Balagh suggested that two plans ought to be set forth, a short-term one and a long-term one.

According to the first plan, urgent projects for the Sinai citizens would be implemented, such as addressing the provision of drinking water and sewage networks and other pressing issues. The second plan would involve bigger projects, provided that the implementation period does not exceed one or two years at the most, he said.

“We should not let projects drag for years and decades as happened with the national project for the development of Sinai, which kicked off in 1994 and was planned to end by 2017. The greater the delay in the completion of projects, the greater the likelihood of implementation failure,” he said.

Concerning the presidential decree to establish a university in the south of Sinai bearing Saudi King Salman bin Abdul-Aziz Al Saud’s name, in parallel with the establishment of El-Arish University in northern Sinai, Balagh said, “Founding these two universities greatly reflects the interest of the Egyptian political regime to bring about real development in Sinai and integrate it in the community. The two universities would include all major subjects that could benefit Sinai. We hope that these dreams come true and that both universities see the light of day.”

In an attempt to demonstrate the government’s efforts to develop the Sinai Peninsula, the governor of north Sinai, Abdel Fattah Harour, told Al Ahram April 15, “There are hundreds of development projects underway. The name of Sinai in the mind of all Egyptians in different provinces is associated with terrorism depicted by the media. However, people are not aware of the fact that development projects have strongly kicked off following the end of the first stage to eliminate terrorism," and were named in honor of those killed.