Egypt's foreign minister has made a list of measures Iran must take before the two countries can discuss normalizing relations, but it's doubtful that he really expects Iran to meet them. 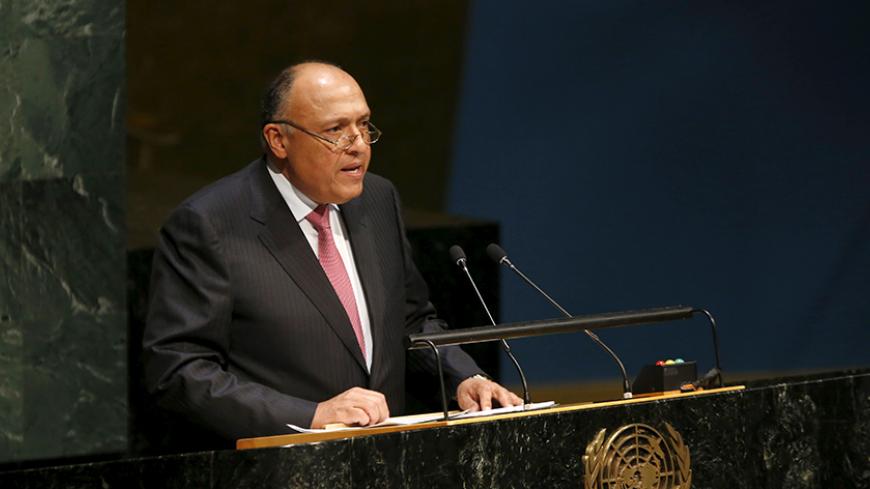 Egypt's Foreign Minister Sameh Shoukry addresses the Opening Meeting of the 2015 Review Conference of the Parties to the Treaty on the Non-Proliferation of Nuclear Weapons in regard to Iran at the United Nations headquarters in New York, April 27, 2015. - REUTERS/Mike Segar

CAIRO — When Egyptian President Abdel Fattah al-Sisi took office in June 2014, he invited Iranian President Hassan Rouhani to attend the inauguration ceremony, which sparked talk about a possible restoration of relations between the two countries.

During a March 31 interview with the Saudi newspaper Okaz, Egyptian Foreign Minister Sameh Shoukry said resumption of relations must be tied to several factors. Mainly, he said, Iran needs to change its approach and policies regarding the situation in the region; demonstrate a desire to build relations based on mutual cooperation, respect and parity of interests; respect Arab states' independence and sovereignty; and practice non-interventionism.

Egyptian-Iranian relations have been tense for decades. Under Egyptian President Gamal Abdel Nasser, controversy and hostility marked the relations between the two countries, especially following the inception of the Baghdad Pact in 1954, which included Tehran and which Egypt considered unreliable.

Under President Anwar Sadat, relations took a new political turn following the blows the Egyptian military dealt to Israel in 1973. Egypt's rapprochement with the United States also produced a good relationship with the shah of Iran, Mohammad Reza Pahlavi. This was especially true in terms of their seeking Arab unity and the liberation of Palestine, Arab solidarity and a peaceful solution of the Arab-Israeli conflict, which resulted in the signing of the Egyptian-Israeli peace treaty in March 1979.

Egyptian-Iranian relations, however, took a different turn once more following the fall of the shah’s regime in February 1979 with the outbreak of the Islamic Revolution. Sadat received the fugitive shah in Egypt, thereby cutting diplomatic ties with Iran in 1980. On April 28, 1991, diplomatic relations were restored at the business level under Egyptian President Hosni Mubarak, as Egypt and Iran had common interests. Nevertheless, relations have been tense almost continually. Iran condemned the Egyptian-Israeli peace treaty and chose the path of what it called “resistance.”

Egypt also supported Iraq’s war on Iran, which lasted from September 1980 until August 1988 and was known as the First Persian Gulf War in the Muslim world.

Although Egypt supported Iran's membership in the Group of 15 in 1999, tension returned in 2004, when Egypt accused Iran of attempting to spy on it through the Islamic Revolutionary Guard Corps in order to assassinate an Egyptian figure whose identity Cairo did not reveal.

In February 2013, Morsi invited his Iranian counterpart, Mahmoud Ahmadinejad, to attend the Organization of Islamic Cooperation summit in Cairo. Ahmadinejad was offered a rapturous welcome.

Egypt's foreign policy approach to Iran remains complicated. The Gulf countries are Egypt's main engine, as they were first to support Cairo following the revolution of June 30, 2013, particularly Saudi Arabia during the reign of King Abdullah and then King Salman bin Abdul-Aziz Al Saud.

This was reflected in Sisi’s statement to Al Arabiya in May 2014, before he won the presidential election, when he said, “Iran is well aware that the relationship with Egypt goes through the Arabian Gulf. They are our family and we are keen on seeing them live in peace. All we seek with Iran is a fair relationship.”

In an interview with BBC Arabic in November 2015, Sisi said, “We have no relations with Iran. Egypt is greatly responsible for Arab national security, as it is an integral part of Egypt’s national security.”

Mohammad al-Saeed Idris, head of the Arab and regional studies unit at Egypt's Al-Ahram Center for Political and Strategic Studies, told Al-Monitor that “conditions are not conducive for restoring relations between Cairo and Tehran.”

He said, “There is an Arab-Iranian conflict, especially with Saudi Arabia. Any rapprochement between Egypt and Iran would be viewed as a stance against Saudi Arabia. Iran has been taking wrong measures that exacerbate crises, such as its unjustified expansion in Yemen. This is not to mention its role in Iraq, whereby it is using the sectarian conflict by supporting Iraqi Shiites, preventing the achievement of real political stability.”

Idris, who is also a member of the people’s diplomatic delegation that visited Tehran after the June 2013 revolution, said, “Iran is doing the opposite of the conditions set by Shoukry. Should it commit to them, the Iranian-Saudi conflict would come to an end.” He said Tehran is unlikely to abide by Shoukry’s recommendations.

Iman Ragab, an expert on Gulf Affairs at Al-Ahram Center, told Al-Monitor, “Egypt is deferring dealing with the relations with Iran,” because — according to her — the history of relations between the two sides is mired with bilateral issues that Iran has not worked to resolve. Iran also did not respond to Egyptian demands regarding national security, specifically concerning Iran's support for some armed groups in Gaza smuggling weapons through Egyptian tunnels, which is worsening the security crisis in the Sinai Peninsula.

“Moreover, the Egyptian ruling elite is deferring the issue of relations with Iran because of Saudi Arabia, which is taking a stance against the normalization of relations with Iran until it meets the conditions Saudi Foreign Minister Adel bin Ahmed al-Jubeir set forth during his visit to Cairo in May 2015, when he said that Iran should stop interfering in the affairs of the region’s countries, and desist from supporting terrorism and from taking actions undermining the interests of the region’s peoples,” said Ragab.

Ragab also said that Iran believes relations with Egypt are bound to be economic first and foremost, especially following the suspension of economic sanctions after the signing of the nuclear deal with the six world powers (the United States, United Kingdom, France, Germany, Russia and China).

“Egypt does not have a clear vision about the nature of interests it shall have with Iran in the event of normalization of relations. Does it seek economic relations or political stances with regard to regional issues? Bearing in mind that Tehran does not want political coordination with any country, including Egypt,” she added.

Commenting on Saudi Arabia’s role in the resumption of relations with Iran, Ragab said, “It is an important factor for Egypt, given the strategic relations between Cairo and Riyadh, especially following the June 30 Revolution. Egypt will not take any stance with Iran that could lead to tension in relations with Riyadh.”

She believes the conditions set by Shoukry for the normalization of relations amount to diplomatic games, since the minister is well aware that Tehran will not meet them, but “he is throwing the ball in Iran’s court, waiting for its next move,” she added.