How Syria is pushing Egypt and Iran closer

Converging views on Syria appear to be leading to real mutual support between regional powers Iran and Egypt. 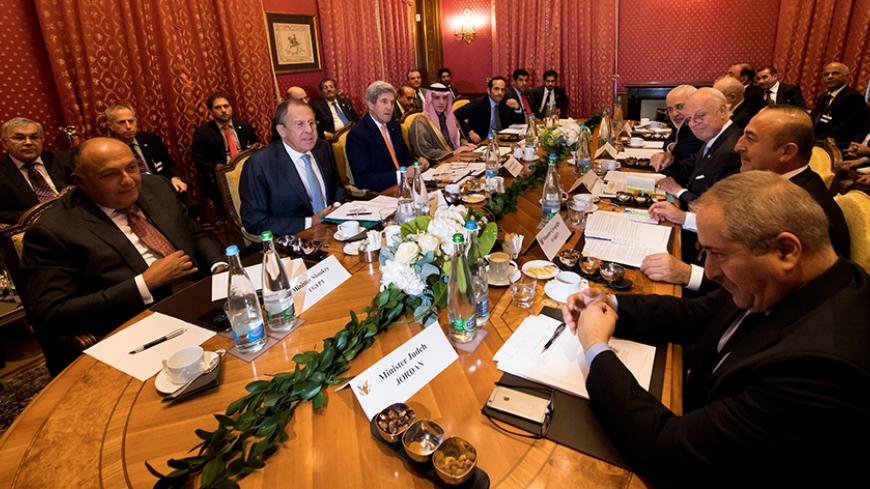 TEHRAN, Iran — Once again, Egypt and Iran appear to be heading toward rapprochement, with increasingly converging views on Syria bringing the two regional powers closer together.

Tehran and Cairo have long followed a pattern of enthusiasm about normalizing ties only to see rapprochement remain a mirage. In December 2003, Egyptian President Hosni Mubarak held a groundbreaking meeting with his Iranian counterpart Mohammad Khatami on the sidelines of a UN technology summit in Geneva. The meeting — the first between an Iranian and an Egyptian president since the 1979 Islamic Revolution in Iran — generated talk of rapprochement, but such a thing never occurred. More recently, former Iranian President Mahmoud Ahmadinejad traveled to Cairo in February 2013, a landmark visit in which he was greeted by his Egyptian counterpart Mohammed Morsi on arrival — but again with no real subsequent warming of relations.

Once very close, Iran and Egypt cut ties in the aftermath of the Islamic Revolution, given Iranian opposition to Egypt and Israel’s signing of the September 1978 Camp David Accords, Cairo’s later hosting of the deposed shah of Iran and the Iranian government’s naming of a street in Tehran after Khalid Islambouli, the man who assassinated Egyptian President Anwar Sadat.

Now, the Syrian crisis may be helping Iran and the Arab world leader finally get closer — and perhaps even lead to their long-sought rapprochement.

Normalization has been impeded by three main limitations on the Egyptian side. These include the US policy of seeking to isolate Iran, which has been weakened since the nuclear deal; Israel’s policy of confrontation with Iran, which has intensified after the signing of the Joint Comprehensive Plan of Action; and lastly, Saudi Arabia’s policy of seeking to curb Iranian influence, efforts that have been heightened in the aftermath of both the Arab Spring and the nuclear accord.

Egypt’s stance on the Syrian crisis was far closer to that of Saudi Arabia during Morsi’s tenure, as the Syrian branch of the Muslim Brotherhood sided against embattled Syrian President Bashar al-Assad. In his speech at the August 2012 summit of the Non-Aligned Movement in Tehran, Morsi, a member of the Muslim Brotherhood, angered his Iranian hosts with criticism of the Syrian government. He also sided with the United Arab Emirates against Iran over three disputed islands in the Persian Gulf. A high-ranking Iranian diplomat who spoke on condition of anonymity previously told Al-Monitor, “Mr. Morsi had said that he would only come to Tehran for a few hours, that he would not spend the night here and that he will not meet with the supreme leader.”

In contrast, ever since Gen. Abdel Fattah al-Sisi seized power in July 2013, Egypt has gradually distanced itself from its previous stance on Syria. At the same time, Sisi has tried to approach Russia, a move that has been welcomed warmly by Moscow, with the Kremlin currently negotiating the potential use of military bases in Egypt.

Things may have taken a further turn on Sept. 23, when Iranian Foreign Minister Mohammad Javad Zarif met with his Egyptian counterpart Sameh Shoukry on the sidelines of the UN General Assembly summit in New York. The Syrian crisis seemed to be the main topic of the discussions between the Iranian and Egyptian diplomats. Indeed, according to Al-Ahram, Shoukry emphasized the differences between Saudi Arabia and Egypt over the crisis in Syria in subsequent interviews with Egyptian media outlets, saying, “The coalition fighting in Syria may want to change the regime in the country, but that is not Egypt’s position.” He added, however, “The differences do not mean we have a problem. It’s just a difference in point of view.”

The Zarif-Shoukry encounter was followed by a meeting between the new head of the Egyptian interest section in Tehran, Yaser Othman, and Hossein Amir-Abdollahian, the Iranian parliament's general director for International Affairs who until recently served as deputy foreign minister for Arab and African Affairs. During the meeting, Abdollahian expressed Iran’s enthusiasm about cooperation with Egypt on regional issues — including the Syrian crisis. He said, “Iran and Egypt are two major and influential countries that can play a constructive role in decreasing the tensions in the region through common regional cooperation.” In response, Othman voiced hope for cooperation with “Iranian friends” to fill the gap between the two countries. He added, “The increase of negotiation and consultations between the officials of the two countries will be effective for improvement of the situation of the region.”

The apparent increase in interactions between Iran and Egypt has irritated Saudi Arabia, which is locked in serious disagreements with Tehran over regional issues. A Sept. 26 report by the Russian news agency Sputnik claimed that a senior Saudi official called the Egyptian president following the Zarif-Shoukry meeting to express his anger over the encounter. The same report alleges that, during the same phone call, the Saudi official threatened to cut aid to Cairo.

The big picture appears to be that the recent string of meetings between senior Iranian and Egyptian officials could signal the beginning of unprecedented cooperation between the two countries. This warming could lead to a final normalization of ties and also potentially coordinated action on the Syrian crisis. In this vein, the confusion surrounding Iran’s participation in the Oct. 15 multilateral talks on Syria in Switzerland is particularly noteworthy.

According to an Iranian diplomat who spoke to Al-Monitor on condition of anonymity, Tehran initially refused to attend the meeting and only decided to do so on the condition that Iraq and Egypt be included as well. Indeed, on Oct. 14, a day before the talks, Iranian Deputy Foreign Minister for Arab and African Affairs Hossein Jaberi Ansari announced that Iran, Egypt and Iraq would join the meeting. This maneuver is far from good news for the United States and Saudi Arabia, as it suggests that the weight of the Iran-Russia axis in the multilateral dialogue on Syria could be growing. Nonetheless, although the Syrian crisis could be a game-changer in Iran-Egypt ties, it remains to be seen whether Egypt will fully side with the Iran-Russia axis and stand up to Saudi and US pressures.