Why Iraq's Kurds are united in Baghdad and divided in Erbil

Despite their internal divisions, Kurdish parties are united in the face of Iraqi Prime Minister Haider al-Abadi's plan to reshuffle the Cabinet. 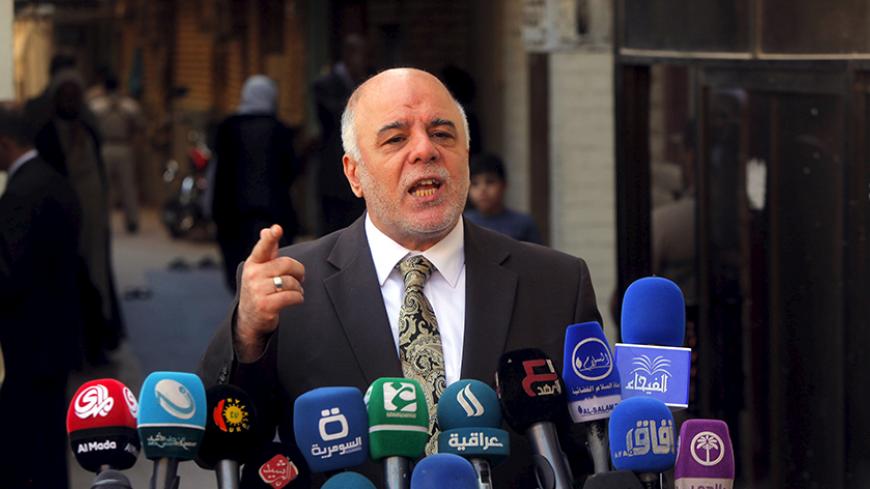 ERBIL, Iraqi Kurdistan — The ongoing reform push by Iraq's Prime Minister Haider al-Abadi has brought about a sense of unity in the Kurdish ranks, unseen for the past couple of years.

When Abadi declared plans in February to reshuffle his Cabinet, an unintended consequence of his efforts was uniting major Kurdish factions in opposition to his stated goals. Kurds have stood against Abadi's efforts to circumvent established political blocs and pick technocratic ministers for his Cabinet without having them being nominated by political groups.

"The Kurdish unity has stemmed from understanding the delicacy of the current situation in Iraq and Kurdistan," Tariq Gardi, an Iraqi member of parliament from the Kurdistan Democratic Party (KDP) that has the largest Kurdish bloc in the Iraqi parliament, told Al-Monitor. "Kurds agree that the principle of political partnership should be reflected in Baghdad's institutions, as we Kurds are not just a political faction but a key component of this country."

The five Kurdish blocs in the parliament in Baghdad have 62 seats in the 328-member chamber. The KDP has 25 seats, and the rest is divided among four other parties that are the Patriotic Union of Kurdistan, Gorran, Kurdistan Islamic Union and Kurdistan Islamic Group (Komal).

Although Abadi put forward 14 names at a parliament session March 31 as his choices for ministerial portfolios, the opposition from established Kurdish parties appears to have worked. They were against Abadi picking the ministers without consulting with them and objected to the reduced share Abadi has given to the Kurds. Now, Nizar Saleem Numan Doski, Abadi's nominee to head the crucial Ministry of Oil, has said he will not accept the nomination if Kurdish blocs in the Iraqi parliament do not support him.

Kurds have even suggested that if Abadi is so keen to form a Cabinet of nonpartisan technocrats, he should also step down because he is a senior leader of the Islamic Dawa Party and as such does not fit the criteria he has set for his own Cabinet.

The current show of Kurdish unity in Baghdad comes amid deep fissures among those parties over a number of thorny issues in Iraqi Kurdistan.

At the heart of the disputes is the fate of the office of Iraqi Kurdistan's presidency. Gorran and Komal have opposed the extension of Massoud Barzani’s tenure for another two years by a government body known as the Justice Ministry's Consultative Council.

The political strife led to Barzani's KDP taking the unusual step of blocking Gorran's speaker of the Kurdish parliament from entering the Kurdish capital, Erbil, on Oct. 12, 2015, and expelling four Gorran ministers from the Kurdish Cabinet.

Ever since, the parliament has been in a state of limbo. Gorran is now back in its opposition role inside Iraqi Kurdistan and demands an overhaul of the establishment there. Before its expulsion from the government, Gorran was the second-largest bloc in the Kurdish coalition government in Erbil with four ministerial portfolios out of 21.

But despite the bad blood in Iraqi Kurdistan, both Gorran and Komal have stood together with the KDP and other Kurdish groups in Baghdad in opposing Abadi's efforts to reform the Iraqi government. The Kurdish parties, in fact, appear to have developed an ability to compartmentalize their differences.

"There is currently a strategy by the Iraqi Kurdish parties to ensure there is a unified stance in Baghdad. This stance appears to be insulated from the political rivalries inside Iraqi Kurdistan," Ahmed Ali, a research fellow at the American University of Iraq in Sulaimaniyah, told Al-Monitor.

Although Gorran has joined the Kurdish consensus in Baghdad with regard to Abadi's moves, Sirwa Abdulwahid, a member of parliament from the party, said they support the prime minister's reforms. "His reform efforts are good," Abdulwahid told Al-Monitor. She added, "What we are against in regard to Abadi's reforms is that the Kurdish representation in Baghdad’s institutions should not fall below 20% of the posts."

Of the 14 ministers proposed by Abadi for his new Cabinet, only two are Kurdish.

Abdulwahid said her party, like other Kurdish groups, is against Abadi's decision "to pick ministers for us. Everywhere in the world, political blocs pick their nominees and they are the ones representing people politically."

The Kurdish members of parliament who Al-Monitor spoke to said Abadi's nominees for the ministerial positions will be most likely rejected by parliamentary blocs. They say Abadi now either has to accept "technocratic" individuals put forward by political groups or risk facing a no-confidence motion by the members of parliament.

Amid the newfound Kurdish unity in Baghdad, some politicians are already calling for the unity in Baghdad to be used as an opportunity to mend fences inside the Kurdish house as well.

In a sign of its disgruntlement with the situation back in Iraqi Kurdistan, Gorran has refused to attend meetings of Kurdish blocks held in the Kurdish region and only attends the ones convened in Baghdad.

Ahmed Haji Rashid, a member of parliament from Komal, said calling for Kurdish consensus in Baghdad while imposing a party's will in Kurdistan can't continue. He directs the bulk of his criticism at the KDP, which is the dominant party in the Kurdistan Regional Government (KRG).

"Fundamental reforms should be carried out in the political, administrative and economic realms," Rashid wrote in a post on his public Facebook page. "The KRG needs to be a balanced institution in terms of its participants and the current monopolization needs to end."

Kurdish sources say Abadi has now authorized the Kurdish blocs to pick three ministers for the new Cabinet on the condition that they are "technocratic" and competent.

If at the time of launching his reform project the prime minister hoped he could capitalize on the deep divisions among Kurdish parties in Iraqi Kurdistan to press ahead with his agenda, he has just achieved the opposite. His Cabinet overhaul efforts have only triggered a strong backlash and united response from the Kurds.