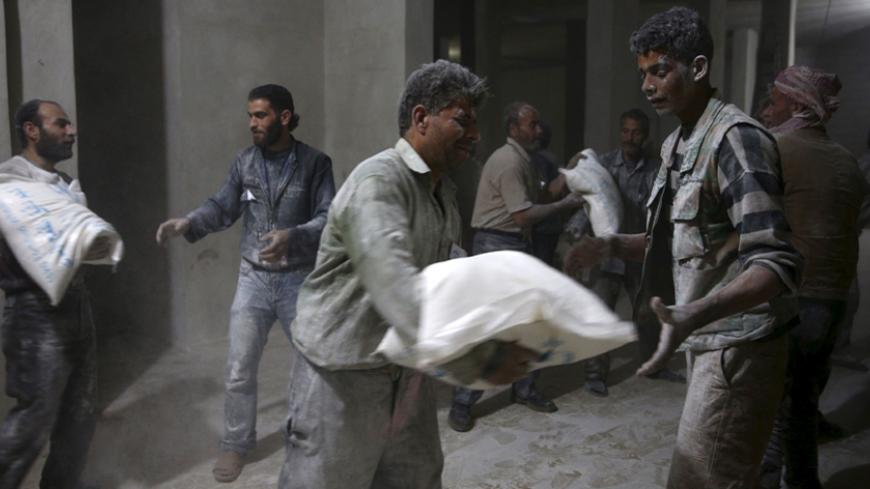 Men store bags of flour unloaded from a Red Crescent aid convoy in the rebel-held besieged town of Jesreen, in the eastern Damascus suburb of Ghouta, March 7, 2016. The cessation in hostilities in Syria has produced the first significant flow of humanitarian assistance in several years. - REUTERS/Bassam Khabieh

On March 27, the cessation of hostilities in Syria will have held for one month. Yes, there have been violations, but the agreement has held. Given where we were, and where we are, we might put the present state of affairs in the category of a small miracle, a breakthrough for US-Russian leadership and cooperation and, hopefully, a turning point for the Syrian people.

US Secretary of State John Kerry said in Moscow on March 24, “There has been a fragile but nevertheless beneficial reduction in violence — some say as much as 85-90% — in Syria. It’s also true that the cessation in hostilities has produced the first significant flow of humanitarian assistance to people, some whom haven’t seen that assistance in several years. But we both know that more needs to be done in terms of both a reduction of violence and the flow of humanitarian aid.”

There is of course much more to be done, and if the cessation of hostilities continues to hold and expand, it will be the result of a deep and impactful partnership between Kerry and Russian Foreign Minister Sergey Lavrov. Kerry said March 24 that the United States and Russia have agreed to press for expanded humanitarian assistance, the release of detainees and an acceleration of the political process leading to a transition government, a new constitution and elections. The same day, UN Special Envoy for Syria Staffan de Mistura said that both the Syrian government and the opposition delegations had taken the first round of negotiations “very seriously.” Talks are expected to resume in April.

And let’s add a bit more good news: The Islamic State (IS) is losing ground in Syria and Iraq. IHS/Jane’s reported March 15 that IS has lost 22% of its territory in both countries, mostly in Syria, since January 2015, a trend that accelerated with the Russian military intervention on behalf of the Syrian government in September. US Special Operations Forces killed top IS financier Abd al-Rahman Mustafa al-Qaduli last week, and as this column goes to press, Syrian government forces, backed by Russian air power, are poised to retake Palmyra from the terrorist group.

As IS loses ground in Syria and Iraq, its fighters are already seeking new territories, especially in Libya, and new targets, including in Europe, as evidenced by the deadly terrorist attacks in Brussels on March 22, which claimed 31 lives.

Maxim Suchkov wrote, “Putin now holds an important position for the shaping of a political transition in Syria. Russia acquired the air base in Khmeimim [or Hmaimim], which it did not have before. Its geopolitical standing is secured as a power broker in the Middle East, while its weapons are in great demand across the region. The global outreach is incredibly important as well. Some would even argue it was central to the idea of the operation from the very beginning. In addition, Russia showcased its military might, sending signals to those who might have been tempted to put it to the test. Russia also excelled on the public relations side of the art of modern war. Detailed daily reports from the Defense Ministry, accompanied by high-definition maps and video footage, prevented opponents from manipulating its campaign results in the media. Even if Moscow doesn’t save [Bashar al-] Assad’s presidency, his departure will be a negotiated event, not forced, an important element for Putin personally and for Russia’s vision of its role in contemporary international affairs.”

Ali Hashem, speaking with official Syrian and Iranian sources, confirmed that “when Russia decided it was time to withdraw the major part of its forces from Syria, the announcement, on March 14, came as no surprise to its allies in the Syrian civil war. The Syrian government, Iran and Hezbollah had been informed in advance.”

This column appreciates the complexity and fragility of the Syrian peace process, and the long game against IS and al-Qaeda, but we admit to being cautious optimists. The Obama administration is on the right track in Syria, with admittedly a long way to go. In our very first column, in December 2012, we identified the role of Russia as one of “four trends that might signal if and when there is an endgame in Syria — and what that endgame would be.” The Russian trend is indeed shaping the Syrian endgame, and the United States is right to work with it. Russia’s interests in Syria are not a perfect match for the United States, but neither are the interests of America’s traditional allies in the region. While some may understandably second-guess Russian intentions, and rightly criticize its at times indiscriminate bombing campaign in support of Syrian government forces, as this column has done, it might also be useful to create a scorecard or tally comparing Russia’s record with those of other regional powers in both seeking a peaceful end to the conflict and undertaking direct attacks on IS and Jabhat al-Nusra, al-Qaeda’s affiliate in Syria. Our back-of-the-envelope calculation is the Russian score on these counts would probably fare well compared to US regional allies. The attacks in Brussels last week reveal the stakes in Syria are linked to a struggle against IS, al-Qaeda and other terrorist groups. In Syria, as in the broader international battle against terrorism, the United States and Europe are well-served by collaboration, rather than confrontation, with Russia.

Massoud Barzani, president of the Kurdistan Region of Iraq, told Amberin Zaman in an exclusive interview for Al-Monitor that the Kurdistan Workers Party (PKK) and the Democratic Union Party (PYD) are “exactly one and the same thing,” and that the United States turns a “blind eye” because of the priority to fight IS.

In regard to the referendum on independence for the Kurdistan Region, Barzani said “with utter conviction that, barring circumstances beyond our control, that yes, we are trying to do it this year. … I think it will be before October.” He said that the wording of the referendum question, or questions, are still being worked out, and that “we are talking to Baghdad, we will talk to Iran at the same time that we talk to Turkey. We want to do it [transition to independence] in a peaceful and balanced way.”

Barzani acknowledged popular discontent with a lack of transparency in Kurdistan Regional Government energy deals and promised “to fight corruption and to fight those people who exploited their government position for oil contracts, sales of agricultural land and things like that. Whoever will be responsible from the Ministry of Interior, Ministry of Peshmerga, prime minister, any minister, any leader of the party, any security official — they all must be held responsible for what they have done.”