US 'encouraged' by momentum in Syria peace talks

As the partial Syria cease-fire holds for a month, the United States and Russia expressed cautious optimism that they have found agreement on ways to move the Syria peace process forward. 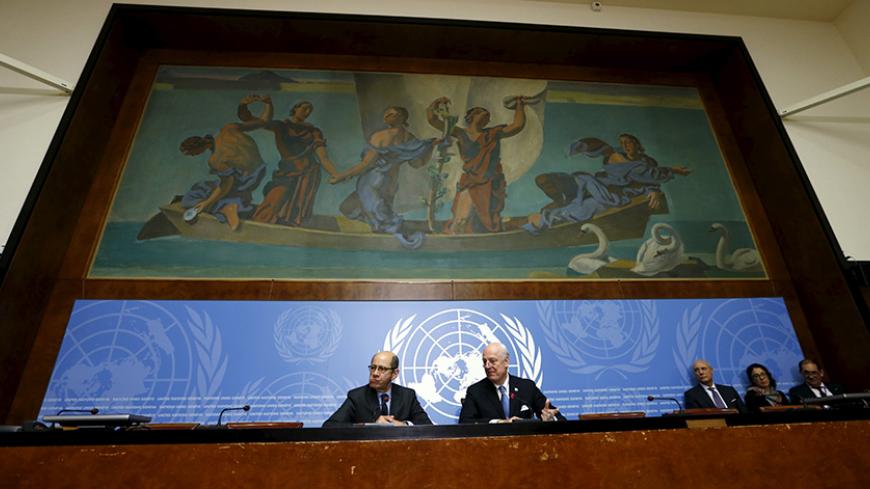 UN mediator for Syria Staffan de Mistura (R) gives a news conference at the end of the Syria peace talks at the United Nations in Geneva, March 24, 2016. - REUTERS/Denis Balibouse

WASHINGTON — The United States and Russia are expressing cautious optimism that they have found common ground on how to move the Syria peace process forward when talks resume in Geneva next month.

The more positive US and Russian assessments on the Syria peace process come amid an increase in US-Russian engagement on the matter that has long been sought by Russia. Secretary of State John Kerry traveled to Moscow to meet with Russian President Vladimir Putin and other officials March 24. CIA Director John Brennan also secretly traveled to Moscow for consultations on Syria in early March, Russian officials said March 28. Undersecretary of State Tom Shannon will travel to Moscow March 28-31 to follow up on Kerry’s consultation there, the State Department said.

“We are all encouraged that there is a sense of momentum now in the political process that we haven’t seen before,” State Department spokesman John Kirby said at the State Department press briefing March 28.

Kerry “felt very encouraged by his discussions in Russia,” Kirby said. “And encouraged by the agreements that we were able to reach with the Russian government in terms of the political process itself. … And now we have to get down to implementing those agreements.”

Kerry, speaking to journalists after a four-hour meeting with Putin in Moscow on March 24, said the United States and Russia have agreed the next round of Syria talks in Geneva, expected to start April 11, should be direct, face to face, between the Syrian regime and opposition delegations, and should focus on the details of a political transition, aiming for reaching a new Syrian Constitution by August. He also said that the United States and Russia had agreed on mechanisms for strengthening the partial Syria cease-fire that has mostly held for one month.

“We agreed that the next steps in the Geneva talks is to immediately take up the details of the political transition — the best and perhaps the only way of ending the war,” Kerry said at a Moscow news conference with his Russian counterpart Sergey Lavrov on March 24.

“We agreed on a target schedule for establishing a framework for a political transition and also a draft constitution, both of which we target by August,” Kerry said. The US and Russia also agreed “to build on recent gains by taking immediate steps to reinforce the cessation of hostilities, including by working to … halt attempts by either side to seize new territory,” he said.

“So I would say to you that I believe Russia is fully engaged in this effort, and all of us are going to try to get [Syrian] President [Bashar al-] Assad to make the right decision in these next days to engage in a political process that results in a genuine transition and in peace for Syria,” Kerry added.

Russian Foreign Minister Lavrov agreed that a political transition in Syria is necessary and that all parties must push their respective proxies to intensify direct discussions on the details of it.

“That is the necessity to have the political process, including the agreement on the details of … the creation of the transitory governing body with all the fullness of the executive power,” Lavrov said at the March 24 news conference with Kerry.

“We have agreed that the pressure on all the sides must be increased in order to bring all the Syrian participants of this process to the Geneva communique and the decisions of the UN Security Council taken after that,” Lavrov added.

Russian Deputy Foreign Minister Sergey Ryabkov, who was Russia’s lead negotiator at the Iran nuclear negotiations and is viewed as very constructive by Washington, said he was cautiously optimistic about the discussions with Kerry and the Syria developments were moving in the right direction.

“Regarding Syria, I would use the phrase ‘cautious optimism’ about our views on the current situation there,” Ryabkov told Russia’s Interfax News Agency in a March 25 interview posted to the Russian Foreign Ministry website.

“The talks were extremely clear on the need to continue exchanging information and coordinating our actions … in order to make the cease-fire last and to reduce the number and scale of cease-fire violations that could threaten the process,” Ryabkov said. “It’s a fact that we have reached serious practical results in this area, and this includes Mr. Kerry’s visit.”

“In other words, there has been progress in the military and political spheres, and yesterday’s talks were one more step in the right direction,” Ryabkov added.

UN Syria envoy Staffan de Mistura, speaking at the conclusion of two weeks of Syria talks in Geneva March 24, issued a paper with 12 common points drawn from his discussions with the Syrian regime and opposition delegations and members of civil society, which he said he believed could form the basis for common ground on their vision for the future of Syria.

“I think by looking at those 12 points, you can see that there is a lot of common ground,” de Mistura said. “It is what they are; they are an understanding by the facilitator of what could be, and we believe are likely to be, a common ground.”

Among the most interesting points in the UN envoy’s paper on commonalities, point 10 envisions a unified Syrian national army that would integrate members of Syrian armed groups who support the transition and new constitution.

“Syrians are committed to rebuilding a strong and unified national army, also through the disarmament and integration of members of armed groups supporting the transition and the new constitution,” the de Mistura paper says. “That professional army shall protect the borders and population of the State from external threats in accordance with the principle of the rule of law. The state and its reformed institutions will exercise the exclusive right of controlling weapons of war. There shall be no intervention by foreign fighters on Syrian soil.”