As IS fight ramps up, Obama sees modest progress, hope for Syria diplomacy

President Barack Obama cited fragile progress in forging a Syrian diplomatic road map at international talks in Vienna that called for bringing the Syrian regime and opposition together for talks leading to a cease-fire, a new constitution in six months and new elections in 2017. 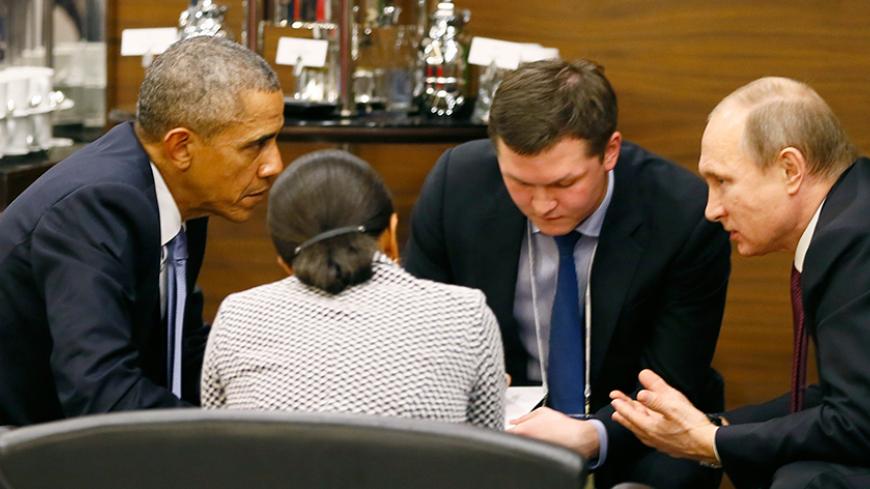 WASHINGTON — Amid a growing consensus that ending Syria’s civil war is a critical component of the international effort to combat the so-called Islamic State (IS), US President Barack Obama said there has been modest progress at international talks in Vienna to chart a diplomatic way toward ending Syria’s civil war. But he warned that the diplomatic path ahead — comprised of parallel efforts to advance a Syrian political track while working toward a cease-fire — will be extremely difficult, despite newfound international resolve and urgency following the terrorist attacks in Paris that are believed to have been directed by IS militants in Syria.

“We’ve begun to see some modest progress on the diplomatic front,” Obama told a press conference at the G-20 summit in Antalya, Turkey, on Nov. 16.

Led by the United States and Russia, diplomats from 17 countries as well as the European Union and United Nations who met in Vienna Nov. 14 issued a plan for holding negotiations between the Syrian opposition and regime starting by Jan. 1, followed by writing a new constitution in six months and holding new elections within 18 months. The political track is supposed to be accompanied by a cease-fire that would exclude the stepped-up international fight against IS.

Noting the success of getting all of the key international stakeholders, notably including Iran and Saudi Arabia, into direct, international talks on Syria for the first time at the meetings in Vienna on Oct. 30 and Nov. 14, Obama warned, however, that continued differences including over President Bashar al-Assad’s future could shatter fragile international consensus on the path ahead.

“Hopes for diplomacy in Syria have been dashed before. There are any number of ways that this latest diplomatic push could falter,” Obama said.

“What is different this time,” he added, “and what gives us some degree of hope, is that … for the first time, all the major countries on all sides of the Syrian conflict agree on a process that is needed to end this war.”

What else has shifted may be that fighting IS and ending Syria’s civil war have moved to top-tier priorities for a critical mass of countries, especially in the wake of the Nov. 13 Paris terrorist attacks that killed at least 129 people from 19 nations.

“The events in Paris underscore the threat that [IS] poses to all of us,” Secretary of State John Kerry told journalists at a joint press conference with Russian Foreign Minister Sergey Lavrov and UN Syria envoy Staffan de Mistura in Vienna Nov. 14.

“But we also know that [IS] cannot be defeated in the end without de-escalating the underlying conflict in Syria, which attracts fighters to this battlefield,” Kerry said. “And that will require a political process, and that’s why we are here in Vienna yet again.”

In a joint statement, the International Syria Support Group (ISSG), comprised of 20 nations and international entities including the United States, Russia, Iran, Saudi Arabia, Turkey, the United Nations, the European Union and the Arab League, stressed the need to work on parallel tracks to advance a Syrian political path out of the bloodshed, as well as for a cease-fire.

“The ISSG acknowledged the close linkage between a cease-fire and a parallel political process … and that both initiatives should move ahead expeditiously,” the 20-entity body said in a statement Nov. 14. It went on, “The group agreed to support and work to implement a nationwide cease-fire in Syria to come into effect as soon as the representatives of the Syrian government and the opposition have begun initial steps towards the transition under UN auspices.”

Russia’s Lavrov, in his press conference comments, hinted that some members of the ISSG were not ready to sign off on a Syria cease-fire yet. And both he and Kerry acknowledged there was still a lack of consensus among the international participants on such key matters as if Assad would be allowed to stand in new elections in 18 months, as well as who would represent the Syrian opposition at the upcoming talks.

“We all want to stop violence in Syria, and the majority of delegations today were for an immediate cease-fire; but unfortunately, not all of them were prepared for that,” Lavrov, speaking in Russian, told the press conference in Vienna Nov. 14.

“We have reiterated that the Syrian future will be decided by the Syrian people alone. This regards also the destiny of Mr. Assad and any other politician in this country,” Lavrov added.

Even as such key differences remain, the United States and Russia and other international countries were showing more resolve to try to build on areas of common ground, de Mistura said, noting Jordan had agreed to try to come up with a common list of which groups fighting in Syria would be considered terrorist groups, beyond the two already designated as such by the UN — IS and Jabhat al-Nusra.

“The good thing about this International Support Group is that … we are starting seeing partners among them volunteering to actually help in actually taking on some of the leading beginning work,” de Mistura told the press conference. “So we did hear that for instance Jordan, as you rightly said, is planning to assist us in order to come up with a proper analysis among other partners on what could [be included in] the terrorist list.

“The clear intention is to have a political process and negotiation connected with a cease-fire, the sooner the better,” de Mistura said. “So momentum is the key word, and the momentum continued. And now is the test for us, for the UN, for all of us, to actually not give up on this.”

European leaders said they were pressing Russia to recognize there would be no political solution that halts the fighting in Syria under Assad, in order to bolster international unity in the fight against IS. French President Francois Hollande will travel to Washington to meet with Obama on Nov. 24 and to Russia to meet with Russian President Vladimir Putin on Nov. 26, the Elysee said Nov. 17.

“In Syria, we’re looking for the political solution to the problem, which is not Assad,” Hollande told a special joint session of parliament in Versailles Nov. 16, noting he would travel to Washington and Moscow soon for meetings with Obama and Putin. “Our enemy in Syria is [IS].”

“The most urgent need of all [is] to find a political solution that brings peace to Syria and enables the millions of refugees to return home,” British Prime Minister David Cameron told a press conference in Antalya Nov. 16. “This morning, I held talks with President Putin and I urged him to work with the international community to support a transition in Syria, away from President Assad and his ruthless brutality,” Cameron said. “We need to find a way to work together to bring this fighting to an end and to focus on the aim we all share: destroying the evil death cult that is [IS].”

Despite increased international resolve and urgency, Syria experts and former diplomats said they saw scant signs the parties had moved closer on critical issues such as the future of Assad, and were therefore not optimistic the new diplomacy would be able to succeed.

“With regard to Vienna, let’s be honest,” former US Ambassador to Syria Robert Ford told a Middle East Institute conference Nov. 13. “The fundamental differences between outside players have not been resolved.

“I have seen no indication the Russians have moved an inch,” Ford said. “Everything they have said in 2015, I heard them say in 2011 and 2012. Same with the Iranians. If anything, the Iranians have ratcheted up a notch.”

For the political process to succeed, the parties have to “come to the table to make serious compromises,” Ford said. “I see no sign of compromise. Within Syria itself, I see nothing from the Syrian regime that it is prepared to compromise.”

“I don’t know how you would achieve what is outlined there, achieve a transition, changes of a constitution,” and plans for new elections, “unless the Iranians and the Russians turn the wrenches on the regime,” Andrew Tabler, a Syria expert at the Washington Institute for Near East Policy, told Al-Monitor in an interview Nov. 16.

“I am scratching my head about this as well,” Tabler said. “I think this is another example of when Kerry says, ‘The price of failure necessitates progress.’”