The United Nations warned of a catastrophic breakdown of the Syria cease-fire as the United States said it was outraged by what it initially assessed to be a deliberate Syrian regime airstrike on a Doctors Without Borders hospital in Aleppo. 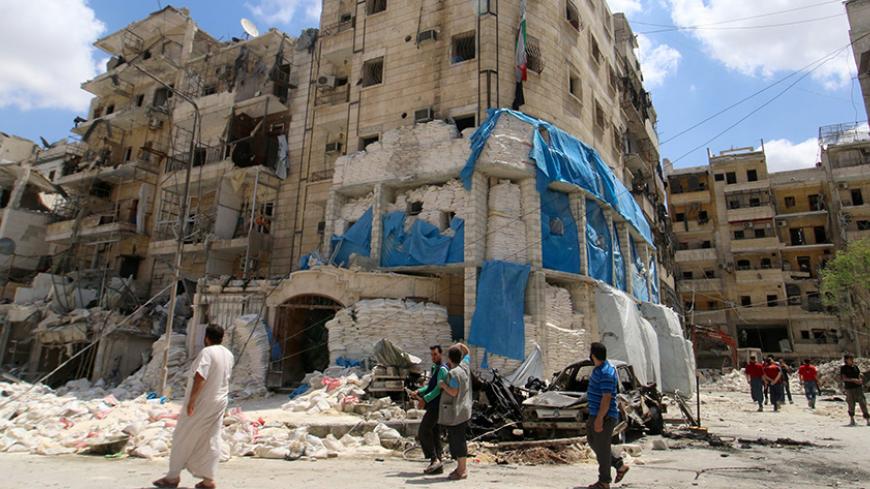 People inspect the damage at al-Quds hospital after it was hit by airstrikes, in a rebel-held area of Aleppo, April 28, 2016. - REUTERS/Abdalrhman Ismail

WASHINGTON — The United States expressed outrage at what it initially assessed to be a deliberate Syrian regime airstrike on a Doctors Without Borders-affiliated hospital in Aleppo that killed dozens of people, and the United Nations has warned of a catastrophe if the United States and Russia don’t quickly restore Syria’s partial cease-fire that has badly degraded in Syria’s largest city in the past week.

"We are outraged by yesterday’s airstrikes in Aleppo on the al-Quds hospital … which killed dozens of people, including children, patients and medical personnel," Secretary of State John Kerry said in a statement April 28.

“While we are still trying to gather the facts surrounding the circumstances of this attack, it appears to have been a deliberate strike on a known medical facility and follows the Assad regime's appalling record of striking such facilities and first responders," Kerry continued. "The United Nations today assessed the situation in Aleppo to be catastrophic … Russia has an urgent responsibility to press the regime to fulfill its commitments."

The rapidly escalating violence in Syria — which in the past 48 hours has been killing one Syrian every 25 minutes, UN special envoy for Syria Staffan de Mistura said April 28 — came as US officials said they were engaging intensively with Russian counterparts on how to restore the Syria cease-fire, but were oblique about at what level those discussions were taking place. US officials also acknowledged that Syrian opposition groups ostensibly abiding by the cessation were still "intermingling" with al-Qaeda-linked Jabhat al-Nusra militants in the wider Aleppo area, making delineating no-go areas more difficult.

"We are intensively engaged with Russia … on the urgent need [of] all parties to respect the cessation of hostilities," a senior US administration official speaking not for attribution told Al-Monitor April 28. "We call on Russia to use its influence with the Assad regime to urge it to cease its attacks on the Syrian people."

Kerry has not spoken with Russian Foreign Minister Sergey Lavrov in a few days, State Department spokesman John Kirby said April 28, but he anticipated that a meeting of the 20-member International Syria Support Group (ISSG) would be arranged in the next few days to try to re-establish the cessation of hostilities.

UN officials implored the United States and Russia to redouble their efforts to restore the cease-fire or see a humanitarian catastrophe in Syria and a breakdown in the Geneva talks on a political transition, which wrapped up its latest round April 27.

"The catastrophic deterioration in Aleppo during the past 24 to 48 hours, also in the Homs area, was reported live to the members of the ISSG today," UN Syria humanitarian chief Jan Egeland told reporters in Geneva April 28. "No one doubted the severity of the situation, and now no one is uncertain about the consequences."

"I could not in any way express how high the stakes are for the next hours and days," Egeland said. "The stakes are so incredibly high because so many civilian lives are at stake. So many humanitarian health workers and relief workers are being bombed, killed, maimed at the moment, that the whole lifeline to millions of people is now also at stake."

"This round of talks has instead been overshadowed, let’s be frank, by a substantial and indeed worrisome deterioration of the cessation of hostilities," de Mistura told journalists early April 28 in Geneva. "We cannot ignore the fact that, during these talks, we have been having incidents, one after the other. … A few hours ago, we had an airstrike on a hospital in Aleppo … the last doctor, pediatric doctor, was killed."

"In the last 48 hours, we have had an average of one Syrian killed every 25 minutes. One Syrian wounded every 13 minutes," de Mistura said.

While de Mistura emphasized that he aimed to continue the talks, he would not schedule another round until the United States and Russia had re-established the cease-fire.

"What we need to do and to hear is that the cessation of hostilities is salvaged and … saved from a total collapse," de Mistura said. "It's still alive, but barely. And the perception is that it could collapse at any time."

"We need that [the cessation of hostilities] to be urgently revitalized," de Mistura said. "And only the Russian Federation and the United States … need to come back again and relaunch it."

Regarding reports that Lavrov had been resistant to schedule another ministerial level meeting with Kerry on restoring the cease-fire, a diplomat involved in the Syria talks said it made sense that an understanding needed to be reached between the United States and Russia before a face-to-face meeting between their foreign ministers.

"It makes sense that both sides reach an understanding to salvage [the cessation of hostilities]," the diplomat, speaking not for attribution, said April 28. "Only then does a meeting … make sense. Otherwise the meeting will slide into mutual recriminations and thus undermine the Vienna process."

"Let's see what happens over the next few days," the diplomat said.