Has Erdogan confused freedom of expression with spying?

Turkish President Recep Tayyip Erdogan takes a swipe at the authority of Turkey's high court by criticizing its decision to free journalists he says are spies. 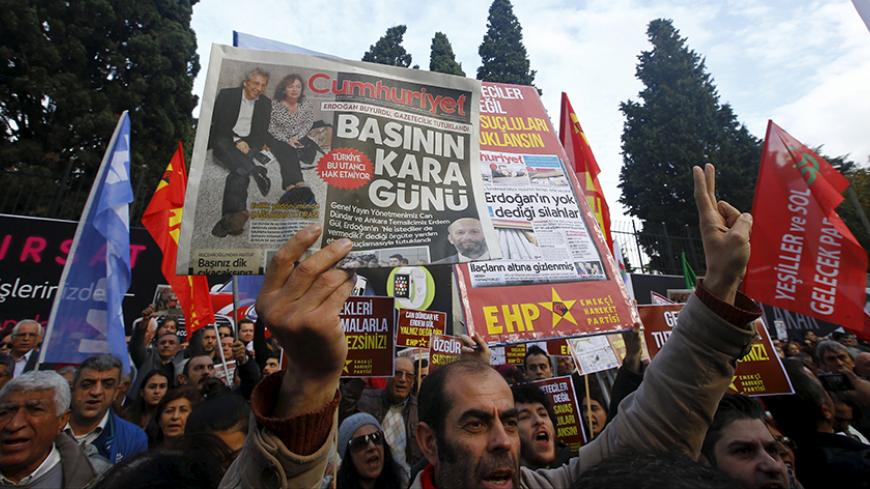 A demonstrator holds a newspaper that reads "Black day of the press" during a protest outside the Cumhuriyet newspaper in Istanbul, Turkey, Nov. 27, 2015. Around 2,000 people protested on Friday over the arrest of two prominent journalists on charges of espionage and terrorist propaganda, a case that has revived long-standing criticism of Turkey's record on press freedom under President Recep Tayyip Erdogan. - REUTERS/Osman Orsal

Turkey’s “strongman” President Recep Tayyip Erdogan is going the extra mile in his trajectory of authoritarianism by challenging a Constitutional Court ruling.

The Constitutional Court issued a ruling Feb. 25 on the case of two imprisoned journalists, Cumhuriyet editor-in-chief Can Dundar and the daily's Ankara bureau chief Erdem Gul. The pair had been behind bars for the past three months, accused of espionage because of a news story that included images showing weapon transfers from Turkey to Syrian jihadi opposition factions.

Their high-profile case received international attention and became quite controversial. Even US Vice President Joe Biden, during his recent visit to Istanbul, met with the journalists' families. In a poignant show of solidarity, he told Dundar’s son that he could be proud of his father.

The Constitutional Court last week ruled that the men's imprisonment violated their rights. The court’s ruling compelled their release. The ruling was received by rejoicing crowds in front of the prison during the early hours of Feb. 27. The court — the highest judiciary body in Turkey — set a precedent that inspires hope for some 31 journalists who are still behind bars.

There was no doubt that the Constitutional Court ruling would upset Erdogan, but few predicted that he would openly challenge it with bristling remarks. Yet he did.

“I am neither obeying nor respecting the Constitutional Court’s ruling,” he said, as he was about to embark on a trip to West Africa covering Cote d'Ivoire, Ghana, Nigeria and Guinea. His statement was published on the presidency's website. "Let me be clear that this event has nothing to do with freedom of expression. This is a case of spying.”

Although stressing that he fully supports freedom of expression, Erdogan said no one can attack the country under the guise of liberty.

"This is spying, [and] intelligence organizations in every country have almost infinite legal power — and so they can’t be interfered with so easily by any ordinary prosecutor,” he added.

“Now, after our departure, there will be a lot of turbulence behind us over my statement,” he said, signaling that he was aware of the possible dramatic ramifications of his statement.

He was right. His statement crashed onto the already-tense political agenda of Turkey like a bombshell. However, Erdogan hasn’t backtracked. “That means my statement was well-directed,” he said.

More than being well-directed, his statement was problematic regarding the nature of the regime in Turkey. In a democratic country, the president’s disapproval of a court ruling is moot. Yet in an autocratic, totalitarian or theocratic regime, nobody can speak about the separation of powers.

Turkey has become a hybrid country in this respect — a quasi-democracy. Thus, when the “strongman president” announces his disapproval of a ruling by the Constitutional Court, no one knows where the resulting controversy might lead or how it should be resolved.

Contesting a Constitutional Court ruling means opening up a discussion over the constitution and consequently the legitimacy of the president himself.

It is very difficult to doubt Erdogan's political savvy. So why did he make such a statement?

Most probably, he does not appreciate any action that could challenge his quest for unlimited personal power. Except for the military, the Constitutional Court is the most important institution — in terms of checks and balances — that might contain him.

Erdogan does not want any checks and balances. He feels such a mechanism could jeopardize his political survival. For Erdogan, democracy is becoming more and more a straitjacket.