Why Turks are skipping banks and keeping their gold at home

Turkish banks hope to retrieve 5,000 tons of gold that Turkish citizens have accumulated since World War I, and return it to the economy. 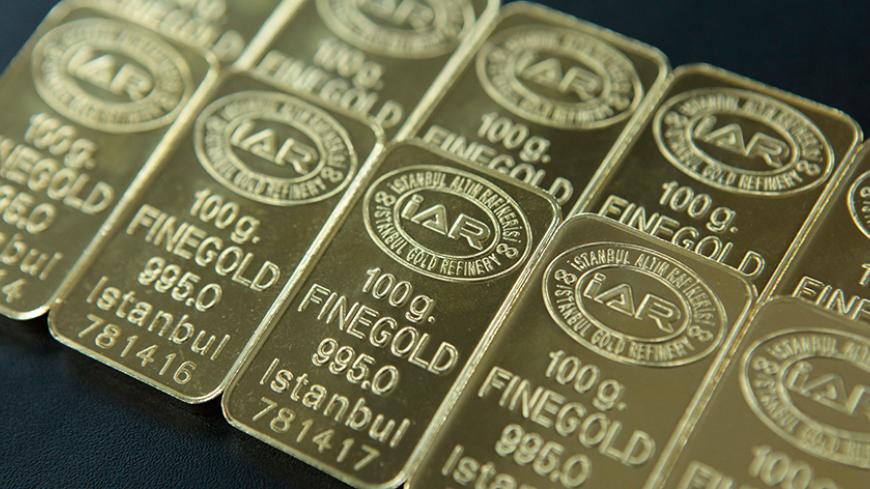 Bars of 100 gram (3.5 ounce) fine gold are seen in this picture taken at the Istanbul Gold Refinery in Istanbul, March 12, 2013. - REUTERS/Murad Sezer

Gold jewelry that adorns the arms and necks of many Turkish women is actually a traditional instrument of savings. Newlyweds put together their initial capital with gold coins, trinkets and jewelry pinned on them at weddings. But this gold, once hidden at home, has absolutely no benefit to the economy.

The Istanbul Gold Refinery (IAR) has been striving for five years in cooperation with banks to draw this gold back into the economy. In a project involving 11 banks, IAR experts inspect and assess the gold brought in by bank clients. When the amount is logged into the clients' accounts, the physical gold becomes registered gold.

IAR explains the benefit of the system: “Gold will be safe. There will be no risk of theft or loss. The state guarantee for the gold deposit accounts is 150,000 Turkish lira. They are available 24 hours [a day] for transactions. Clients can cash any amount they want from their gold accounts.”

According to a report by the official Anatolian news agency, because of a recent rapid hike in gold prices, the value of gold kept in homes has increased by about $48 billion over the past 15 months. Compared with earlier years, gold prices so far this year have broken all records already.

Officials think the campaign to attract gold might work; as of July 2015, 45 tons of gold has been deposited in banks.

Spearheading the drive to invigorate these dormant gold stocks is the Central Bank of Turkey. Durmus Yilmaz, former governor of the Central Bank, told Al-Monitor, "Banks report their deposit levels to the Central Bank every two weeks. If there is an increase, they have to deposit some percentage of that increase as a provision to the Central Bank in Turkish lira. But after 2011, the Central Bank began to accept foreign currency and gold. Banks prefer to submit their provisions in gold rather than currency, because gold doesn’t earn interest in the market."

Yilmaz said the real solution is to encourage citizens to try other attractive investments instead of amassing gold.

“You have to find a way to encourage the citizens to invest in bank deposits, bonds and the stock market instead of gold," he said. "Traded gold doesn’t enter the economy. One person sells and the other buys and puts it in the safe. It has no impact on the market.”

“The 5,000 tons of under-the-mattress gold has been accumulating since World War I. This gold amassed by Turks is kept in safes and on the fingers, necks and arms of women," he said. "If that gold instead becomes a bank deposit and banks use it as credit, the credit will be more available and will be cheaper, which means more investments and more production."

No matter how often banks use the slogan "It is time to bring us your gold from home," this will only happen when alternative investment instruments become more attractive and the pinning of gold at weddings ends. But it's not easy to change such a deeply rooted tradition.