The Justice and Development Party’s repeated insults that Kurds are considered Armenians are aimed at labeling the pro-Kurdish HDP as non-Muslim, and to justify the heavy attacks on border towns in the southeast of Turkey. 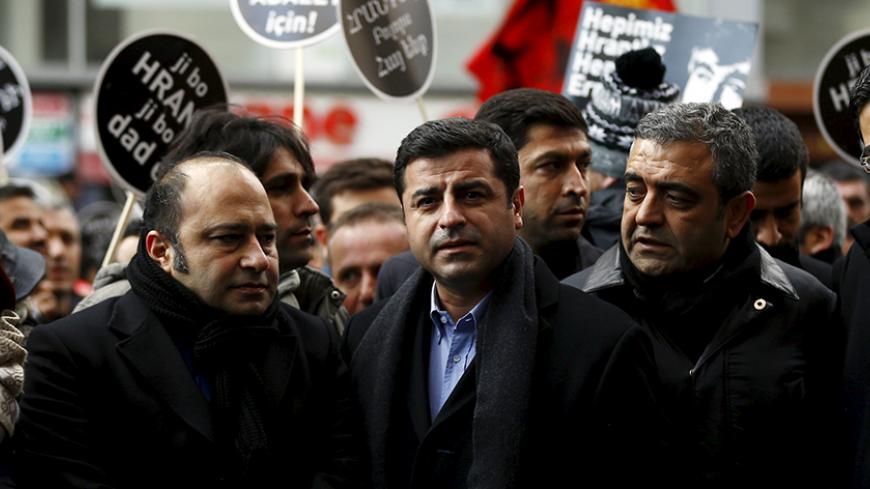 Co-chair of the pro-Kurdish Peoples' Democratic Party (HDP) Selahattin Demirtas (C) attends a ceremony in Istanbul on Jan. 19, 2016, to mark the ninth anniversary of the killing of Turkish-Armenian editor Hrant Dink. - REUTERS/Osman Orsal

Turkish Prime Minister Ahmet Davutoglu gave a searing speech Feb. 27 on the pro-Kurdish Peoples' Democratic Party (HDP) in the eastern province of Bingol. In his speech he accused the Kurds of taking advantage of the situation in the southeastern border towns of Sur and Silopi. "They are collaborating with Russia like the Armenian gangs used to do. They are opening a diplomatic mission in Moscow," he said.

Nurhan Becidyan, an Armenian-American who served in the Turkish army as a reserve officer in the 1970s, told Al-Monitor about the meaning of the term "Armenian gangs." He said, “When an Armenian hears the term, he immediately recalls the official Turkish government history lessons of the past century that talk about how the Armenians in 1915 collaborated with the ‘enemy’ [Russians] and revolted against the Ottomans. Thus they had to be deported and some unavoidable deaths occurred during the deportations. This is a trauma they have been facing for the past 100 years and they now say, ‘Here we go again.’”

In October 2015, Al-Monitor reported on how the security forces refer to the residents of the southeastern towns as Armenians. Since then the trend of labeling Kurds as Armenians has only become more prevalent and official. On Dec. 29, 2015, Justice and Development Party (AKP) parliamentarian Metin Kulunk told the media that Turkey is resilient in the face of threats. He said, “One hundred years ago it was the Armenian gangs who were burning mosques and schools. Today it is the terror gangs of the PKK [Kurdistan Workers Party].” He blamed these gangs for attempting to undermine the Kurdish identity in the region. Davutoglu, once known as a calm-mannered professor of political science, is repeating similar lines today.

Immediate replies came from HDP Co-chairman Selahattin Demirtas, who is frequently labeled as an Armenian. Indeed, Davutoglu in May 2015 claimed Demirtas’ alleged cooperation with the Armenian diaspora was the reason for the collapse of the Kurdish peace process.

The Armenian diaspora in the United States perceived Davutoglu's words as an unintended confession of the 1915 genocide. Although not reported in the Turkish mainstream media, Edward Nalbandian, foreign minister of Armenia, issued a statement in this regard stating that not much has changed in the last 100 years. Nalbandian argued that Davutoglu’s statement incidentally accepts that the Armenian genocide was deliberate and planned.

Another boisterous critic is Garo Paylan, the HDP’s Armenian lawmaker. Paylan first tweeted at Davutoglu asking, “Are you going to convince the Kurds with the Armenian hatred card?” On March 2, he gave a powerful speech in parliament addressing Davutoglu’s rhetoric, saying, “Pity! How can a prime minister utter such words? This is a hate crime.” AKP members promptly told him he was taking Davutoglu’s words out of context, and that there was no hate crime.

However, Paylan was prepared to tackle the AKP and the Nationalist Action Party representatives. He displayed several images of graffiti (allegedly from the southeastern cities) that have recently been shared on social media. One read, “Armenian bastards” from the town of Cizre. Paylan mentioned another graffiti that read, “We love you tall man RTE,” where two security personnel posed with a Turkish flag. On Feb. 10, Turkish President Recep Tayyip Erdogan said that he was touched by this message. Paylan asked, “What kind of training do these security forces receive that they can write on the walls, “If you are a Turk be proud, if not obey”?

In the last couple of months, the number of tweets and social media posts by anonymous accounts as well as prominent pundits using the word Armenian as a slur have skyrocketed. The following examples indicate the severity of the current situation.

A prolonged legal battle between Ankara’s colorful Mayor Melih Gokcek and Armenian columnist Hayko Bagdat ended March 3. Bagdat had written several tweets ridiculing Gokcek for using the word Armenian as an insult, and joked about Gokcek being an Armenian. Gokcek argued that Bagdat’s tweets were offensive and took him to court. Bagdat was ordered to pay compensation to Gokcek.

Journalist Fatih Tezcan, a staunch supporter of the AKP, tweeted March 3 to HDP Co-chairmen Figen Yuksekdag and Demirtas an old photo of two women in traditional costume holding rifles. The caption of the photo says that these women were members of an Armenian gang. Tezcan wrote, “Look, your ancestors’ photo has been published.”

Several tweets mostly from anonymous accounts told the Turkish forces to attack the “Armenian seeds [semen]” without any mercy and directed satirical remarks to the soccer club Amedspor questioning how the team based in Kurdish-dominated Diyarbakir could seek the national championship of a country whose national anthem the team cannot stand up for?

Recent tweets increasingly show deep anger and resentment toward the HDP and Demirtas, who had asked the people of Diyarbakir to join him for Friday prayer March 4. One Twitter user wrote, “You shameless, you have not left an undestroyed mosque in the region. Go join an Armenian church.”

And it is not just rhetoric. For example, on March 3, in the eastern province of Erzurum, the 98th commemoration ceremony of its liberation turned into a show to celebrate the ancestors who cleansed our lands from treacherous Armenians."

One cannot help but question whether non-Muslims will ever be considered as equal citizens of Turkey. A heart-wrenching anecdote from Ani Balikci, the father of Sevag, a conscript who was killed in the southeastern province of Batman in 2011, indicates those chances are slim. Balikci told reporters that army representatives who came to give the news of his son’s death asked him, “Can we wrap his coffin in the Turkish flag?”

Sevag was a Turkish citizen and a member of the Armenian church, and he died serving his country. He was considered a citizen in order for him to be drafted into the army, but many in Turkey believe a non-Muslim cannot be a martyr. Can this mindset bring comfort to anyone residing in Turkey?