How Syrian cease-fire has reignited spark of the revolution

During the brittle cease-fire, protesters have returned to Syria's streets to assert that the revolution continues. 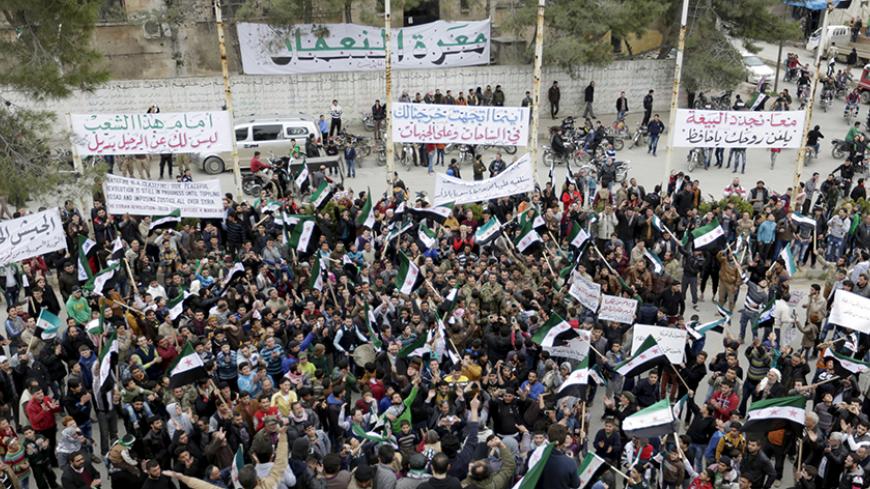 ALEPPO, Syria — As soon as the cease-fire between President Bashar al-Assad’s regime and the opposition went into effect Feb. 27, protesters returned to Syria's streets, bringing to mind the first protests staged five years ago calling for freedom and the overthrow of the government. In March 2011, the southern city of Daraa became the spark that lit the flame of the revolution. Soon after, protests spread to most of the country's cities, from the coast all the way to Damascus, Aleppo, Homs and al-Jazeera.

Back then, the regime failed to tame the demonstrations by firing live bullets at protesters and as the death toll rose, tensions escalated and anger boiled over, intensifying the uprising. The revolution turned from a peaceful movement into an armed rebellion after the regime turned to military options, including the deploying tanks in cities and towns. The country later became the stage for international competition, especially after the Islamic State moved to take advantage of the chaos in the country in April 2013. The sound of bullets and the international community’s focus on fighting IS muffled the protesters’ cries.

Now the demonstrators are back following the extendable two-week cease-fire agreement sponsored by the United States and Russia. Despite some violations, the number of airstrikes and the shelling in most regions has declined substantially, allowing for the return of the peaceful Syrian revolution.

At demonstrations in Aleppo and its countryside, Idlib, Daraa and the Ghouta area surrounding Damascus, protesters can be heard chanting, “The revolution continues.” On March 4, protests were staged in 104 locations, a level of mobilization unheard of for some time now.

These days, the city of Aleppo is experiencing a calm it has not seen since the battle moved into its streets more than three years ago. There are no warplanes in the sky, and the sound of explosions that had become so familiar is no longer heard. Only the devastation and rubble remain to tell the story of the difficult days that befell this weary city.

Some 300,000 people remain in the Aleppo neighborhoods controlled by the opposition, about half of the city. In 2005, some 2.3 million people lived in Aleppo. Although most residents have been displaced by shelling and bombing by regime and Russian forces, the city has managed to muster several protests since the cease-fire began.

Al-Monitor attended a protest organized by activists in Aleppo's Bab al-Hadeed neighborhood March 4 and saw firsthand the protesters' enthusiasm, which recalled the early days of the revolution. Demonstrators raised the flag of the revolution as well as a large banner that read “Long live Syria and down with Assad.”

On the sidelines of the protests, Shamel al-Ahmad, one of the organizers, told Al-Monitor, “I am overjoyed. … We are protesting today just like we did back in 2011, but without bullets, and the security forces are not here to repress us.” According to Ahmad, five years after the outbreak of the revolution, many Syrians have given up hope of the international community helping them achieve their demands. When asked about the reasons behind the demonstration, he said, “We came to confirm that our revolution is ongoing, no matter what happens. We are a resilient and determined people, and we will not back down from our demands: a free Syria for all Syrians and free of Assad and terrorism. Thousands of martyrs have fallen, which makes us more determined not to back off on our rightful and legitimate demands.”

During each stage of the revolution, protesters have issued new demands, among them the rejection of terrorism and IS. What is remarkable about the renewed demonstrations, however, is that the slogans from the beginning of the revolution are still being used, including “The people want to bring down the regime” and “Syria is ours, not Assad’s.”

In Aleppo, field paramedic Huzaifa Dahman brandished a poster that read, “Clear out Bashar.” “We stick with the slogans we raised at the outbreak of the revolution in 2011, which confirms that we will not back down on our demands and will not allow anyone to distort our revolution and the demands for which we took to the streets. Our revolution started in the squares and is now coming back to the squares,” Dahman told Al-Monitor. “Our revolution is peaceful. It had to be militarized to confront the regime’s repression. We stick to our demands: freedom and bringing down the Assad regime.”

If the cease-fire ends, it is unlikely the protests will continue, for fear of being shelled. Syrians see the truce as a chance to make their voices heard around the world and to reiterate that the revolution continues.