Syrian rebels say that the shift to armed movements against Bashar al-Assad’s regime has pushed people away from the main purpose of the revolution that started in 2011 and called for achieving justice, equality and freedom for all. 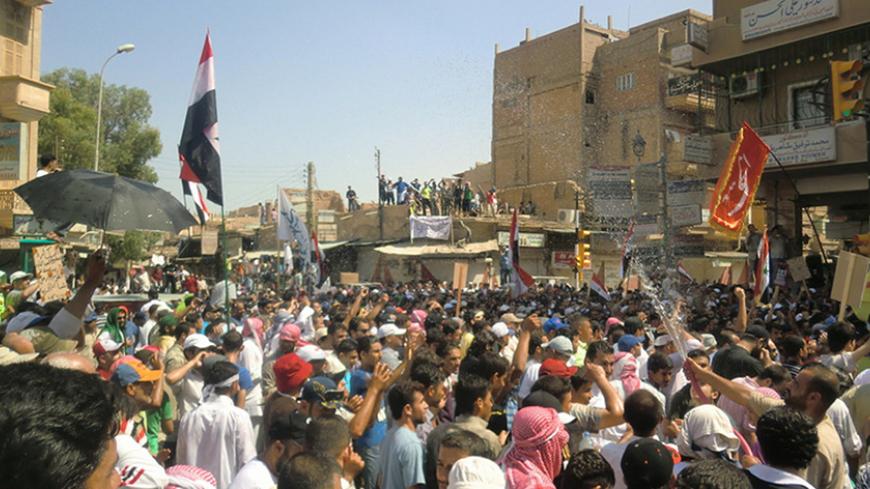 ALEPPO, Syria — March 18, 2011, was an extraordinary day in the history of Syria; the demonstration demanding the release of “Al-Arbaeen School” students in the city of Daraa in south Syria turned into an uprising that swept across the country.

“It is your turn now, Doctor,” the students wrote on their school walls without knowing that this would lead to their arrest by Syrian security forces at a time when Tunisia, Libya and Egypt were putting an end to the era of dictatorships amid what was known as the “Arab Spring.”

While protesters were only demanding freedom and some reforms, it was not long before they started calling for the toppling of the regime and its security apparatus.

Today, four years into the Syrian revolution, the scenario is not what protesters had wished for. The country is divided into four states — the Kurds’ state, the revolutionaries’ state, President Bashar al-Assad’s state and the the Islamic State's (IS) state — while regional forces such as Iran, Turkey and others act as a main engine in the war. Several rebel factions and groups have emerged under several names, such as the Levant Front or Jabhat al-Shamiyya, the Free Syrian Army  (FSA) and Jabhat al-Nusra, while Assad is still clinging to the presidency although some neighborhoods in the capital, Damascus, have spun out of his control.

The economic capital of Aleppo is divided into two: The eastern part of the city is under the control of the rebels, while the western part remains under the regime's control.

Opposition activists in the eastern part, which is almost devoid of population due to incessant shelling, commemorated the fourth anniversary of the start of the revolution. Between March 15-18, there were celebrations and carnivals held in the Bustan al-Qasr, Sheikh Maqsoud, Masaken Hanano and Saladin in Aleppo and the revolution flag (with three stars) was raised in all markets and streets. According to activists, this is the flag that brings them together in the “Free Syria,” as per their own words to Al-Monitor.

On the sidelines of the revolution flag-raising activities in Saladin neighborhood, which Al-Monitor attended, there was a conversation between a group of activists concerning the country’s current state and future.

According to journalist Akil Hussein, 31, the international community was reluctant to defend the legitimate aspirations of the Syrian people, which led to the prolongation of the revolution and drove the country to its current state.

“The regime in Syria is one of the worst regimes in terms of rights and freedoms, and it lacks the minimum levels of legitimacy while it derives its mere legitimacy from its strength. We started the revolution thinking that the world was going to support us in achieving our clear objectives, namely freedom, justice and equality for all. They let us down,” Akil told Al-Monitor.

The formation of the FSA was announced in late July 2012 after the defection of a number of officers from the Syrian army in protest against the “repression of demonstrations and the siege of rebellious cities and neighborhoods.” Most activists agree during their conversations that the use of weapons in the revolution was not in the interest of the revolution itself. Despite this, they believe armament was inevitable to confront the security campaign adopted by the regime.

Akil, who split from the Army Air Force Command during his conscription in 2012, said that “shifting to the armed action at an early stage was wrong as there is a great power difference between us and the regime, and we needed more time in order for the people to be fully and genuinely engaged in the revolution and break the barrier of fear that was imposed by the regime.”

“The military power difference could have been overcome through the popular faith in the objectives of the revolution. Most of the Syrian people are opposed to the practices of the regime, but they are not actively engaged in the revolution,” he added.

Despite the security grip of the regime, described as the “iron fist,” the peaceful movement of the revolution reached advanced stages. The city of Hama (center of the country) witnessed what seemed like a civil disobedience. On July 1, 2011, the city staged an overwhelming demonstration with the participation of half a million people demanding the departure of Assad. The demonstration lasted three days until Assad expelled the governor of Hama and the army invaded the city and carried out a campaign of mass arrests. The revolution has been stifled ever since.

“The regime’s resorting to a military solution and repression naturally led to further use of weapons in the Syrian uprising in order to preserve the revolution,” Hassan Kattan, 24, one of the organizers of the demonstrations at the University of Aleppo, told Al-Monitor.

Yet still, Kattan did not support this option. He said, “We needed more time to form a real and organized army capable of confronting the military regime's arsenal. We had to do so in order to save our lives and revolution, but the consequences were bad.”

The armed movement is largely different from the peaceful movement. Being an opponent to the regime is enough reason for anyone to carry arms, either to seek revenge for the regime’s war crimes, casualties or any other reason. However, the peaceful movement needs a real belief in the principles of the revolution, namely freedom, equality and justice.

Kattan added, “The worst outcome of the armed action is that people who do not actually believe in the objectives of the Syrian revolution have joined it. These might agree on the need to bring down the regime, but they will not agree on our expectations and aspirations.”

Also, Iran, Hezbollah in Lebanon and other regional powers have joined the battle in the framework of a visible military alliance with the regime, and the recent fighting in Aleppo and south Syria was characterized by the wide participation of both Iran and Hezbollah.

An activist in the medical field in Aleppo, Fouad Hallak, 25, said that it is necessary to support the armed movement at this time.

“Forget all the past, we are now facing an attempt to occupy our territory, and it has become very necessary to support the rebels in order to confront the occupying powers,” he told Al-Monitor.

The Baath, or the “Assad family” regime in particular, still holds the reins in the country after four and a half decades, and while Syrians rebels believe that the shift to the armed movement has had negative consequences due to “the international community’s lack of support” for their demands, they now see [this shift] as a dire need in order to confront what they call the "Iranian occupation" of the country.