The documentary "Last Men in Aleppo," which captured the suffering of the city's residents in the Syrian civil war, was honored with a top award at the Sundance Film Festival. 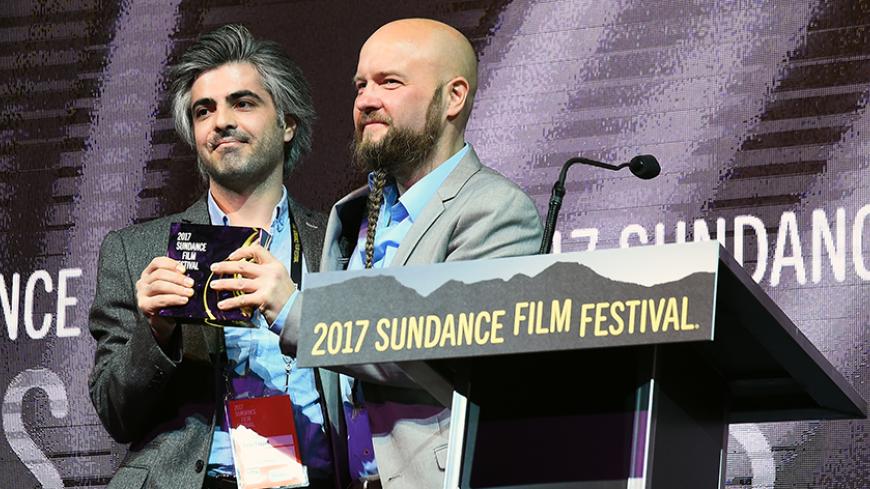 ALEPPO, Syria — A group of journalists and cameramen in Aleppo worked for almost two years under difficult and dangerous circumstances to produce a documentary film capturing the suffering of the city's residents in the ongoing civil war. Their efforts recently paid off: “Last Men in Aleppo” won the 2017 World Cinema Grand Jury Prize for international documentary film at the Sundance Film Festival. Director Feras Fayyad collected the prize along with co-director Steen Johannessen at the Jan. 28 ceremony in Park City, Utah. The film was made possible through the collaboration of Larm Film, a Danish company, which funded the production, and the Aleppo Media Center, which reports on Syrian news and produces video projects.

Work began in mid-2015 on the 90-minute documentary, which depicts daily life in Aleppo’s neighborhoods when they were under the control of the armed opposition, which was forced to withdraw in late December following heavy shelling and aerial attacks by government forces loyal to President Bashar al-Assad and his allies. The film highlights the day-to-day experiences of Syrian civil defense volunteers, also known as the White Helmets, as they go about trying to save civilians being shelled. It also documents the regime siege on Aleppo’s eastern neighborhoods.

Hasan Kattan, the executive director of the Aleppo Media Center and part of the team that worked on the documentary, told Al-Monitor, “The idea for the film came up when the Syrian regime’s aircraft were shelling Aleppo’s neighborhoods erratically. As journalists in Aleppo, we wanted to reflect the pain of the city, which buried hundreds of its citizens and witnessed the homelessness of millions. We wanted the world to feel the suffering of Aleppo’s citizens before they had to leave at the end of 2016.”

Kattan added, “The documentary tells of episodes in Aleppo’s eastern neighborhoods through two members of the White Helmets. It shows the difficulties they faced during their work and daily lives, the massacres that the regime committed against civilians and how they coped under the siege that lasted for more than three months. In general, the documentary sheds light on the humanitarian aspects in Aleppo through these two men.”

On the film's success at Sundance, Kattan said, “When we found out that we had won first prize at the Sundance Film Festival, we were overwhelmed. Our work had finally paid off, and we managed to show the world our suffering, despite the tough filming conditions. The Syrian people have made many sacrifices to get their freedom, and we have been doing our best to show these sacrifices over more than six years.”

Shooting the documentary was obviously not a walk in the park. The team members faced hardships over the past two years, but their insistence on producing a good piece of work true to the people’s suffering and to their sacrifices to obtain freedom and a good life kept them going.

Fadi al-Halabi, a cameraman from the Aleppo Media Center and director of the filming crew, told Al-Monitor, “We faced many difficulties during the shooting process. A missile from an aircraft or an explosive barrel would fall next to the set, but we insisted on completing what we had started. Sometimes, we would become rescuers due to the injuries around us. One day, when the military aircraft were hitting Aleppo, with more than 100 air raids, one of the film's characters — a White Helmets member whom I followed like his shadow — died. I survived by a miracle. I posted on my Facebook page, ‘I knew I would not survive this massacre. Death is piercing through me like a body without a soul.’”

Halabi added, “Journalism and reporting in war zones are courageous acts. When I started shooting documentaries, I imagined how the world would watch this film when completed. I would wonder whether the world would support us till the end or forget us forever. The incidents in Aleppo are beyond words, and cameras do not do them justice. It was hell personified. Watching the battles on television or in cinemas and living them are two different things. But we wanted the world to feel, even if slightly, Aleppo’s suffering. I am happy that we presented a documentary that dazzled the world and won first prize at the Sundance Film Festival.”

The team that produced “Last Men in Aleppo” has sent a powerful message to the world. Those involved know that what they have presented is only a small part of the sacrifices made by the Syrian people in their quest for freedom and dignity. They say this film will not be their last as long as Syrians continue to face missiles and barrel bombs and the world fails to take an effective stand against the ongoing tragedy. Syrians have been suffering since the revolution began, when peaceful protesters demanded freedom, dignity and justice and the regime's removal, and the government responded with bullets and machines of war.

The Aleppo Media Center remains active in the Aleppo countryside. It has two movies underway — one examining Aleppo’s fall, and one looking at the work of media activists during the revolution.