Although the battle for Aleppo ended a year ago, some former residents can't bear to return to the destroyed city, while journalists fear arrest. 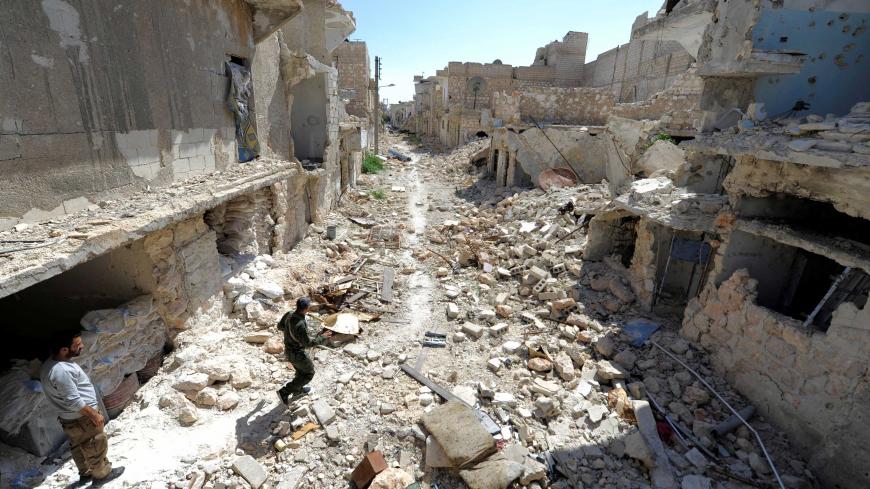 “The moments we are living now in Aleppo could be the last moments of our lives,” Ameer al-Halabi wrote in a Messenger conversation last December to Al-Monitor. “Regime forces are a few meters from here: We could be killed or imprisoned once they enter, especially us … because we are journalists.”

A year after the “fall” of Aleppo, Al-Monitor wanted to reopen the conversations with all those journalists, media activists, photographers and citizens from Aleppo who had been the only ones to tell the world what was happening during the siege of eastern Aleppo and the last days before Syrian regime forces, supported by Russian airstrikes, retook the city from rebel forces’ control.

Halabi, whose real name is Walid Mashhadi but still uses his pseudonym professionally, is still alive. He was only 25 when he left his city to survive the Syrian regime. He lives in Turkey now, while his family, his wife and son, remained in Aleppo. But they will soon reunite in France. Halabi will travel there in January 2018, and his wife and son will join him the same day from Aleppo via Beirut. “I was studying engineering when the revolution started. I began going to the demonstrations against the [Bashar] al-Assad regime. Then, we the protesters soon understood it was important to work in the media. For example, I dropped out of university and worked for a local radio station, Radio Hara, and for the Aleppo Media Center in 2012 and 2013.”

Halabi also worked for international media and humanitarian organizations such as the Qatar Red Crescent. “My wife is still in eastern Aleppo and many checkpoints surround the area. They know she is my wife and so she doesn’t go out too much.”

While Halabi made it out, many friends from Aleppo — everyday citizens, journalists or activists working for the Aleppo City Council — are now in Assad’s prisons and it is difficult to know exactly where they are. “When people were evacuated to the western part of the city, they let them go and stay safe for a while. After a few weeks, the intelligence services went to arrest them. They knew all the people they wanted,” Halabi added.

Another journalist, Salah al-Ashkar, sent a goodbye message from Aleppo last year, too, but he is now safe in France thanks to the French organization Reporters Without Borders. Ashkar confirmed to Al-Monitor the same account of Aleppo’s citizens, saying, “An activist of the Aleppo City Council, Mohammed Hayyo, was arrested after the regime retook the city a year ago, and nobody knows his fate.”

Ashkar, 29, first worked for Agence France-Presse and then Al Jazeera during the battle for Aleppo as a freelance photojournalist. “Many of my childhood friends unfollowed or unfriended me from Twitter or Facebook, and I can imagine why: They are afraid that at any checkpoint a soldier could find my name on their social media accounts and arrest them. I know they are living in fear like before 2011 — and even worse, because Russian police are also there.”

Ashkar is now learning French and would like to study journalism in France. He graduated in 2011 from the University of Aleppo in banking and finance.

Today, 75% of the city’s eastern neighborhoods are destroyed, including houses and public service facilities. But the 2016 second-prize Spot News World Press winner with his series “Rescued from the Rubble,” Halabi said in the video "Eyes of Aleppo," “The city is less destroyed than its people are.”

The short video briefly explains the story of Halabi and two other photographers, Fouad Hallak and Zakaria Abdelkafi, who documented the war in Aleppo: Abdelkafi lost his right eye in an explosion, but he continued to work as a photographer and is now living in France.

“Before the revolution I was a normal student; I was going to school like everyone else, I used to have my favorite song, I used to dream,” Halabi told Al-Monitor. “I photographed Aleppo for 3½ years, concentrating my attention on children, especially those rescued after bombs. My work has been influenced by the picture of the naked child running and crying during the war in Vietnam.” Halabi’s father volunteered with the White Helmets and died in one of the explosions.

During the offensive when the Syrian army retook the city, many Aleppans were evacuated to the western part and others to the rebel-held Idlib countryside, where some still live, while others fled to Turkey, crossing the border illegally. Many citizens went back home, but their exact number is unknown.

A year after the last fight and wave of displacement, the Assad government tried to restore the city's image with sport or cultural initiatives. But among those Aleppans who came back, many could not bear the destruction and poor conditions and left again for Turkey, where many Syrians rebuilt their businesses or created new ones.

Aleppo’s last year of death and starvation is eastern Ghouta’s current reality, with people struggling to survive and evacuation plans for medical emergency cases still being formed. The regime and its allies have been talking in the past few months about reconstruction, which the opposition considers the latest of Assad’s war crimes since its clear purpose will also be to erase proof of the regime's crimes.

Syria is still far from living in justice and peace. Many of the Aleppans who survived last December’s brutal offensive are still trying to find their way in their countries of refuge. “If the regime one day falls, I will go back to Syria. We tried to build some democratic institutions, but with the extremist rebels and the dire conditions of fighting and siege, we couldn’t.” Ashkar said. “My homeland is Aleppo. I miss every single tiny detail. My country is my city, Aleppo. But I would like to live in a country where every four years a different president is elected.”